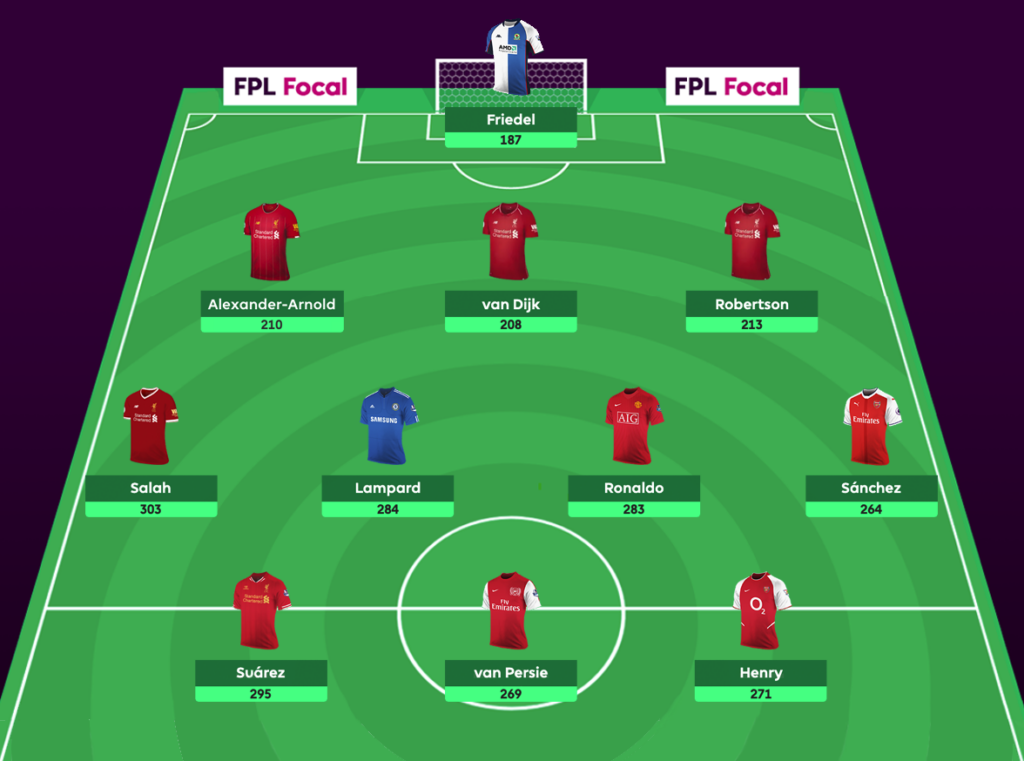 FPL Focal has been playing Fantasy Premier League (FPL) for over 11 years and spent two Gameweeks ranked number one in the world in the 2021/22 season.

Oscar makes FPL videos on his YouTube channel and in this latest of a summer series looking back at some cult Fantasy figures, celebrates the highest-scoring FPL assets of all time.

In goal, it’s Brad Friedel from the 2002/03 season. The American registered 187 points with Blackburn Rovers, making 37 appearances and keeping 15 clean sheets. This was a successful year for Rovers under Graeme Souness, with the former Premier League champions finishing sixth and qualifying for the UEFA Cup.

Remarkably, Friedel remains in the all-time dream team despite appearing in the very first-ever edition of Fantasy Premier League. Bonus points worked very differently back then: it wasn’t automated by an algorithm like today’s bonus system but rather decided by a person – the ‘Man in the Stand’ – who judged who had the best performance. Additionally, there was no one or two points bonus awarded, just three.

Friedel holds the record for consecutive Premier League games played, with an unbelievable 310 matches in a row, spanning from 2004 to 2012 across three clubs and eight years.

He also achieved that rarest of goalkeeping feats, finding the back of the net for Blackburn in 2003/04.

An honourable mention goes to Emi Martinez, who was just one point off tying Friedel’s score in the 2020/21 campaign.

Next up is Trent Alexander-Arnold, who got 210 points in the 2019/20 season. He smashed the record for assists by a defender that season, with 15, and also registered four goals, 14 clean sheets and 24 bonus points along the way. Alexander-Arnold actually knocked Joleon Lescott out of the Dream Team with this score, with the former Everton and Manchester City stopper having scored 196 points for the Toffees in the 2007/08 season.

The next two defenders are also still on Liverpool’s books.

Virgil van Dijk and Andrew Robertson remarkably both qualified for the Dream Team in the 2018/19 season, a year before Alexander-Arnold joined them. They scored 208 and 213 points respectively.

Robertson and Alexander-Arnold’s record-busting numbers are one example of how football has evolved during FPL’s lifetime, with full-backs being much more heavily involved in attacking play than they were previously.

Mohamed Salah‘s magnificent 2017/18 campaign saw him finish on 303 points, which was derived from 32 goals, 12 assists, 15 clean sheets and 26 bonus points. It was his first season with Liverpool and a truly extraordinary performance.

He’s the only player to ever break 300 points in FPL history, and his total of 32 goals is a Golden Boot record in the 38-match Premier League era.

Frank Lampard finished on 284 points in the 2009/10 season. He scored an impressive 22 goals from midfield and picked up 14 assists en route to winning the league with Chelsea.

While debate rages over positional classifications in FPL, Lampard can be considered a true midfielder in footballing terms having played in the middle of the park for the bulk of his career.

Cristiano Ronaldo is still a fixture in this team from the penultimate season of his first spell with Manchester United. He got 284 points from a staggering 31 goals and six assists in 2007/08, when he was classified as a midfielder in FPL.

That season Ronaldo did it all, scoring four free-kicks, four penalties, five headers and five goals with his weaker foot. Had he not missed three games following a red card, he could have tied or even beaten Salah’s single-season points record.

United went on to win the league in that campaign, losing only three fixtures.

Alexis Sanchez completes the midfield from his 2016/17 season with Arsenal, when he banked 264 points. Only two of his 24 goals were penalties, while he also chipped in with 10 assists.

Sanchez never hit the same heights again after that campaign, scoring just seven goals the following season before moving to Manchester United, but he was a truly elite pick at the peak of his powers during his Arsenal tenure.

Salah scored 265 points in the 2021/22 season, meaning he’s actually scored high enough to join the team twice, and Sanchez will be the first to leave the team if another midfielder matches or betters the Egyptian’s points tally from the campaign just gone.

The first of our three strikers is Luis Suarez. The Uruguayan scored 295 points in the 2013/14 season, despite missing the first five games through suspension.

A total of 31 goals and 12 assists came from just 33 appearances as a result and, even more remarkably, not one of his strikes was a spot-kick.

Although Salah beat Suarez’s goals tally by one, the Uruguay international’s average of 0.94 goals per game comes out higher.

Robin van Persie registered 269 points in the 2011/12 season to make the cut here. He played in all 38 games for Arsenal, scoring on 30 occasions and registering nine assists. A dozen of those goals came with his right foot, 17 with his left foot.

An elite striker at his best and part of a very exclusive club of having 30+ goals in a Premier League season.

The final player is Thierry Henry, who like Friedel, still remains in the team from the season that FPL began. Henry scored 271 points in 2002/03, playing 37 games, scoring 24 goals and nabbing 20 assists. His total of 20 assists is still the record to this day for the most in a Premier League season.

The following season Arsenal would go on to have their iconic ‘Invincibles’ year.

Interestingly, back then, it was possible to play a 2-5-3 or 5-5-0 formation in FPL – not that you’d ever want to play a strikerless set-up with Henry in the form he was in.

With Salah as a set-and-forget captain, this team would finish on 3,142 points!

Categories: Uncategorized
Tags: advice, best captain, best chip strategy, best defenders, best differentials, best fixtures, best forwards, best FPL captain, best FPL managers, best FPL players, best FPL squad, best FPL team, best midfielders, best players to sign on FPL, best wildcard squad, budget defenders, budget forwards, budget midfielders, Captain, chip strategy, Fantasy Football, fantasy football scout, Fantasy Premier League, FPL, FPL Chip Strategy, FPL launch, FPL launch date, fpl match report, FPL match reports, FPL prices, free transfers, Games, how do I play FPL, how to play FPL, how to win FPL, Injuries, Injury, injury latest, injury updates, new season, penalties, penalty takers, should I buy, should I sell, Should I use my free transfers?, Tips, transfer, transfer in, transfer out, transfers, Triple Captain, Update, Updates, what should I do with my chips?, What should I do with my free transfers?, What should I do with my Wildcard?, when are the fixtures released?, when does FPL launch, when does FPL return, when does FPL start, when does the new season start, when does the Premier League return?, when does the season start, when is FPL back?, who should I captain?