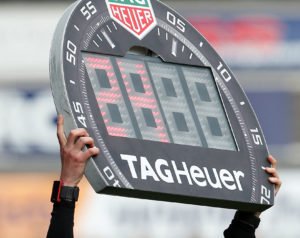 From the start of 2022/23, Premier League clubs will be allowed to make five substitutions per match.

We previously saw this rule temporarily brought into play at the back-end of 2019/20, when a Covid-interrupted campaign had to be played to a conclusion over the summer months.

Here we take a general look at what the overall impact could be on Fantasy Premier League (FPL) next season.

We’ll follow this up with a more focused club-by-club piece on the players who look the likeliest to avoid a withdrawal – and those who are most prone to being substituted.

“Clubs will be permitted to use five substitutions, to be made on three occasions during a match, with an additional opportunity at half-time. A total of nine substitutes can be named on the teamsheet.” – Premier League statement

The game can be stopped for substitutions on a maximum of six occasions (three per side), as was previously the case in 2021/22, with half-time offering an additional window for changes.

The five-substitutes rule ran for nine Gameweeks at the conclusion of the 2019/20 campaign.

Four teams – Manchester City, Arsenal, Aston Villa and Sheffield United – each had an extra fixture during the run-in, so contested 10 games in total.

Below, we look at what each Premier League manager did with their permitted allocation.

Managers highlighted in bold are still at the helm of a top-flight club in 2022/23.

A total of nine Premier League managers from 2019/20 will still be in charge come Gameweek 1 of the upcoming season, with seven of them at the same clubs.

Four of the six most active head coaches are still in the managerial hotseat, with Graham Potter the most prolific tinkerer: the Brighton and Hove Albion boss averaged 4.8 changes per match from Gameweeks 30+ to 38+ of 2019/20.

Jurgen Klopp wasn’t far behind the Albion manager (4.7), with David Moyes relatively hands-off with an average of three alterations per game.

A CLOSER LOOK AT LIVERPOOL AND MAN CITY

There’ll be plenty of FPL investment in the top two in 2022/23, so it’s worth a quick look at these clubs in more focus.

Given that Liverpool had the league sewn up by Gameweek 31+ and City’s focus was on the latter stages of the Champions League, the above tables perhaps aren’t the best sample if we’re looking for clues for next season.

Despite having his focus on Europe, Guardiola was far from the most prolific tinkerer during this period (more of which below).

What he did do, however, was use the half-time window: a total of seven substitutes were made across three matches when City were coasting at 2-0 at the interval. A further 17 of his 41 changes were made in that uncomfortable 55th-to-65th-minute zone where we Fantasy managers are fretting over appearance points.

As for Jurgen Klopp, he was more prolific with his changes (averaging 4.7 per match) but only three of his 42 alterations came before the 60th-minute mark. One of those was enforced because of injury, while the other two were half-time substitutions after poor performances from Joe Gomez and Takumi Minamino.

There aren’t too many takeaways from the above table, with 16 of the 19 managers featured averaging 2.8 substitutions per match or more in 2021/22.

Erik ten Hag is the only Premier League 2022/23 head coach who hasn’t yet taken control of his club, so doesn’t feature here.

The big headline is the relative inactivity of Guardiola. He was by some distance the most laissez-faire head coach, averaging just 2.1 changes per match. It’s a curious trait of the City manager’s, whereby he occasionally opts to let his starting XI last the course when things are going awry; the Gameweek 37 match against West Ham United, when the eventual title winners fell 2-0 behind, was a prime example.

Guardiola’s changes instead tended to be exercises in energy preservation when his side were comfortably in front. The influential Kevin De Bruyne, for example, was the joint-most-substituted City player of last season, being withdrawn in nine of his 25 starts.