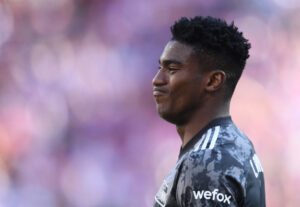 It’s a big summer for newly-promoted Nottingham Forest and the early arrival of Taiwo Awoniyi for a club-record fee shows they aren’t messing around.

The 24-year-old forward has joined from Union Berlin for a fee believed to be around £17m. It’s a statement signing for the two-time European champions and many curious eyes will be on the former Liverpool man.

“I feel great. I feel very happy to be here. Looking at the project, it’s something I’m really looking forward to. What stood out about Forest were the meetings with the Head Coach and the discussions we had. I can see how ambitious and dedicated he is to his job.

Every striker wants to score goals, but I’m ready to work for the team, to fight for every ball, to win every challenge, that’s my style and that’s what I’m here for.” – Taiwo Awoniyi

So, where does the Nigeria international fit in at Forest and what impact will he have in Fantasy Premier League (FPL)?

After five years there, Liverpool signed Awoniyi and immediately sent the 18-year-old to FSV Frankfurt – the first of seven loans.

Consecutive relegations were suffered both here and at Dutch side NEC, so the next two campaigns saw him dispatched to Belgium. Despite having a bad time at Gent, it was sandwiched by two productive spells at Mouscron.

Parent club Liverpool chose to step up his progress by assigning him to top-flight German action. One Bundesliga goal arrived at Mainz before Awoniyi suffered a concussion injury against Augsburg. The forward believes he is lucky to be alive, as doctors confirmed he lost consciousness whilst falling and seemed set to land on his head. Luckily, Awoniyi’s feet hit the ground first.

His final loan spell took place at Union Berlin, impressing the club hierarchy enough to secure him permanently for £6.5m.

Last season was his best for goal scoring, ending on 15 from 31 league appearances. He netted in each of the first three games, then once in the Berlin derby versus Hertha and two on the final day that secured fifth spot and a place in next season’s Europa League.

Elsewhere, Awoniyi was an under-17 World Cup winner with Nigeria in 2013 and made his senior debut last October against the Central African Republic.

According to WhoScored, Awoniyi is superb at dribbling and finishing, which makes him a great option for counter-attacks.

Despite youth coaches being initially impressed by his physical features, the forward has settled at 6ft tall and isn’t particularly strong at aerial duels.

“One of the things we noticed about him was his height, he was really tall for his age. His mental attitude also stood out. Taiwo played like his life depended on it. He had that never-say-die attitude and he was working really hard, so we thought, ‘why not?!’” – Imperial Soccer Academy chief Atiba Bankole

The official Bundesliga site has just profiled Awoniyi for interested observers, where they compare his explosiveness and poacher’s instinct to fellow Liverpool striker Divock Origi.

WHERE AWONIYI FITS IN AT NOTTINGHAM FOREST

The successful rise of Union Berlin is due to Urs Fischer’s wing-back system, with three centre-backs, three central midfielders and two up-front.

This is similar to the formation used by Steve Cooper, which helped transform Forest from a team with just one point after seven matches into a Premier League outfit.

Although several vital players have now returned to their parent clubs – Djed Spence, James Garner, Philip Zinckernagel and Keinan Davis – Cooper is expected to stick with this successful system, meaning Awoniyi will arrive into a familiar set-up.

His intelligence is visible both on and off the pitch, having revealed that he has a Diploma in Business Administration and Marketing Management and is currently studying for a Bachelor’s degree.

IS AWONIYI WORTH BUYING IN FPL?

Our Members Area allows managers to sort the Season Ticker by difficulty. Over the opening eight Gameweeks, Nottingham Forest are deemed to have the eighth-best fixture run.

Of course, a lot of their appeal depends on how well they can replace Spence and Garner alongside the general strengthening needed for play-off winners.

Awoniyi should be their first-choice forward and, if given a generous FPL price tag, could be worth exploring between Gameweeks 6 and 12, a run highlighted in our recent ‘The non-‘big six’ clubs with the best early fixtures in 2022/23‘ article.