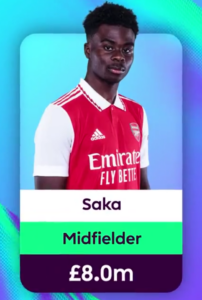 There’s an expected rise for Bukayo Saka after his stellar 2021/22 campaign, with the winger’s starting price climbing from £6.5m to £8.0m.

Aaron Ramsdale is no longer the £4.5m bargain he was last August, although has only been handed a modest increase to £5.0m.

There are some Arsenal assets who have escaped a price rise despite their value-for-money performances in the season just gone.

The stand-out name is Ben White, who holds steady at £4.5m despite a very decent campaign in which he banked 13 clean sheets.

New signing Fabio Vieira – supplier of 20 attacking returns in 27 league appearances for Porto in 2021/22 – has been given a starting price of £6.0m on his FPL debut, meanwhile.

The signing of Gabriel Jesus from Manchester City has yet to be officially rubber-stamped, so we await a price on the Brazilian.

The other members of Mikel Arteta’s squad have yet to be priced up, too.