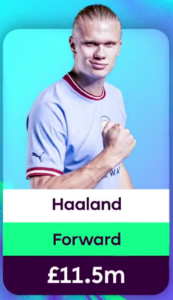 Erling Haaland has entered FPL at probably the lowest price we could have expected, being listed as an £11.5m forward after his move to Manchester City from Borussia Dortmund.

That’s the same price that was handed to Romelu Lukaku upon his transfer to Chelsea last summer and a full million short of what Cristiano Ronaldo was initially listed as after his move to Manchester United.

He’s not even the most expensive City asset, with Kevin De Bruyne (£12.0m) remaining unchanged after a barnstorming end to 2021/22 in which he delivered 21 attacking returns in 20 appearances.

There was no doubt that Joao Cancelo (£7.0m) was going to be handed a price rise after a 201-point campaign in which he started out at a now-unthinkable £6.0m. He actually finished last season at £7.2m after experiencing the highest start-to-finish climb of any FPL defender in the game.

There were eight other City players priced up by FPL Towers on Friday.

Bar De Bruyne and Raheem Sterling (£10.0m), who may be on his way out of the club if rumours are to be believed, there are no City midfielders who will cost you more than £8.0m.

At the back, Kyle Walker comes in at an eye-catching £5.0m, although the possible arrival of Marc Cucurella and the England international’s advancing years are obvious downsides to the 32-year-old right-back, who made only 20 league starts in 2021/22.

We don’t yet have a price for Aymeric Laporte but Ruben Dias is listed at £6.0m and is a non-mover from last season.