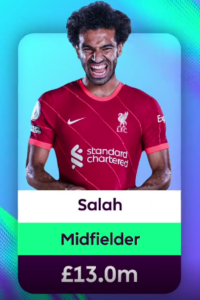 Following Friday’s round of player price reveals for the new Fantasy Premier League (FPL) season, we go again on Saturday.

We’ll be bringing you the latest 2022/23 price announcements and reaction on this page today.

Liverpool were first up this morning, with Mohamed Salah, Trent Alexander-Arnold and Andrew Robertson among the Reds priced up.

If the day follows the same pattern as Friday, we’ll get more price announcements at 12pm, 2pm, 4pm and 6pm BST.

Mohamed Salah will set FPL managers back £13.0m for 2022/23. That is the Egyptian’s highest starting price since 2018/19, the season that followed his record-breaking, 303-point debut campaign at Anfield. He did reach the heights of £13.3m in the spring of this year, however.

Salah is also still a midfielder, the most emphatic confirmation yet that we’re not about to see FPL Towers radically rejig the positional classifications for the new season.

Luis Diaz (£8.0m) is £5.0m cheaper than his teammate, while Diogo Jota and new signing Darwin Nunez both come in at £9.0m. Jota is now a forward after spending much of last season playing through the middle of Jurgen Klopp’s 4-3-3 system. By our calculations, Jota would have ended up on 159 points had he been reclassified last season – enough to finish as the joint-second highest-scoring forward alongside Cristiano Ronaldo. The arrival of Nunez gives him even more competition up top, of course.

There is no price rise for Trent Alexander-Arnold (£7.5m) despite his 208-point campaign, with that total falling just short of the all-time Fantasy Premier League record for a defender.

Andrew Robertson (£7.0m) and Virgil van Dijk (£6.5m) remain steady at their 2021/22 starting prices, too, while Alisson surprisingly drops to £5.5m despite finishing as FPL’s highest-scoring goalkeeper – a move that may well challenge many of our preconceived ideas about opting for a £4.5m budget shot-stopper. Indeed, the best-performing possible ‘ghost squad’ of 2021/22 (that we’ve seen, anyway) had a £5.5m-rated goalkeeper, Hugo Lloris, between the posts.

There’ll be much less interest in the other three Liverpool players priced up today, with Harvey Elliott (£5.0m) and Thiago Alcantara (£5.5m) Fantasy footnotes. New signing Calvin Ramsay is the first £4.0m-rated defender we’ve seen so far, matching what Kostas Tsimikas was a year ago. Ramsay is a back-up at right-back and was a prolific chance creator in his breakthrough year at Aberdeen but it’ll take a serious Alexander-Arnold injury for him to enter our thoughts and even then, Klopp might still opt for Joe Gomez or James Milner initially given that Ramsay is still only 18 years old.