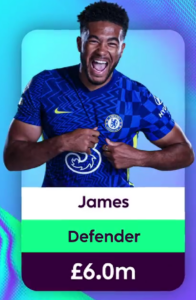 More Fantasy Premier League (FPL) player prices for the 2022/23 season are being released and we’re bringing you live updates as and when they drop.

Chelsea were the first club to make an announcement on Sunday morning, with Reece James and Ben Chilwell among the players priced up. West Ham United and Jarrod Bowen then took centre stage at noon.

If the day pans out the same as Friday and Saturday, we should get four more Premier League teams dropping player prices at 2pm, 4pm and 6pm BST.

There has been plenty of talk in the Fantasy community over the last month over whether a cheaper Ben Chilwell could ‘cover’ the more expensive Reece James in 2022/23 but what we didn’t anticipate was that FPL would price them identically.

James and Chilwell both start the new season at £6.0m, which is on the generous side for James given his attacking threat. The right-back’s patchy fitness record and the defensive turmoil that Chelsea are facing this summer, with Antonio Rudiger and Andreas Christensen making an exit, are contributing factors to his cost but there’ll be plenty of takers at that price.

The Blues are near the top of our Season Ticker for fixture difficulty in the first seven Gameweeks, meeting only Tottenham Hotspur of last season’s top six.

Also to be filed under ‘bargain’ is Edouard Mendy (£5.0m), who like Alisson yesterday has been priced up cheaper than virtually all of us would have predicted. Mendy has fallen one million pounds from last summer and the popularity of the set-and-forget £4.5m FPL shotstopper strategy is certainly being challenged, with Ederson surely set for a lower starting price given what was happened with the goalkeepers of Liverpool and Chelsea.

Thiago Silva (£5.5m) and Cesar Azpilicueta (£5.5m) were the other Chelsea defensive assets priced up this morning.

Further up the pitch, we have seen the expected positional reclassification of Kai Havertz (£8.0m). The German is now a forward in FPL, with just over 60% of his league appearances for Chelsea last season coming when playing through the middle up front. By our rough calculations, Havertz would have lost 18 clean sheet/goal points had he been a forward in 2021/22 but earned an estimated 10 extra bonus points to partly compensate.

Mason Mount has had a minor price rise to £8.0m following his best-ever season for FPL points. The England international racked up 22 attacking returns from just 27 starts and five substitute appearances, averaging an impressive 6.1 points per start.

Callum Hudson-Odoi (£5.5m), Jorginho (£6.0m) and Christian Pulisic (£6.0m) are the other Chelsea midfielders priced up, while Timo Werner (£8.0m) remains a forward and costs the same as Havertz.

Jarrod Bowen‘s (£8.5m) reward for a barnstorming 2021/22 in which he racked up 29 attacking returns and outscored all FPL midfielders bar Son Heung-min and Mohamed Salah is a price hike of £2.0m.

In all likelihood, there’ll probably be few initial takers in the right-winger, and not just because of price: West Ham face Man City, Spurs and Chelsea in the opening six Gameweeks, along with big-spending Aston Villa and a deceptively difficult Brighton side.

Michail Antonio (£7.5m) started last season on fire but ended up something of a damp squib, scoring 40 points in the first three Gameweeks but only adding a further hundred in his next 33 run-outs. FPL have consequently decided to leave him static at £7.5m, and again there will likely be limited interest come Gameweek 1.

There are some potential future bargains in defence if new signing Nayef Aguerd (£5.0m) can help tighten up a backline that kept more shut-outs than just four other teams in 2021/22.

Aaron Cresswell (£5.0m) and Vladimir Coufal (£4.5m) have offered decent attacking threat and returns over the last two FPL seasons but that sometimes hasn’t been backed up with clean sheets at the other end. FPL have thus dropped them both half a million in price.

Aguerd is highly rated and was part of a Rennes side that had the third-best defensive record in Ligue 1 over the two seasons he was at the French club.