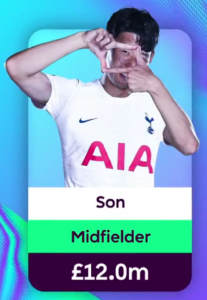 More Fantasy Premier League (FPL) player prices for the 2022/23 season are being released today and we’re bringing you live updates as and when they drop.

Tottenham Hotspur were first up this morning, with Son Heung-min‘s price – and Fantasy position – the headline news.

After a superb season in which he delivered 33 attacking returns and 258 points, Son Heung-min has been handed the inevitable price rise.

He’ll now cost Fantasy managers £12.0m, which is two million more than what his starting price was 12 months ago.

Son is now the joint-second most-expensive asset in FPL alongside Kevin De Bruyne (£12.0m), with only Mohamed Salah (£13.0m) pricier.

The South Korea international will also still be a midfielder in FPL this season; once Salah had avoided a reclassification on Saturday and it became clear that the game-makers weren’t about to overhaul the positional structures, it always looked unlikely that Son would become a forward.

Cheaper than Son is Harry Kane (£11.5m), who drops a whole million pounds from last summer and re-enters FPL at the same price as Erling Haaland. Kane’s total of 192 points was a whopping 66 short of what Son managed in 2021/22 but that was in part thanks to a dismal first 17 Gameweeks in which he delivered just one goal and one assist.

From Gameweek 18 onwards, he was second among all Fantasy assets for points, first for attacking returns and first for double-digit hauls:

Dejan Kulusevski (£8.0m) gets a significant rise too but is still £4.0m cheaper than Son, and the Swede will surely attract plenty of suitors as a result.

Kulusevski was actually an impressive fourth overall for FPL points after his full Gameweek 26 debut, although still a considerable 45 short of an in-form Son over that period.

The arrival of the as-yet-unpriced Richarlison, the introduction of five substitutions and Spurs’ qualification for the UEFA Champions League also raises some doubts about sustained game-time.

That’s one of the downsides to Ivan Perisic (£5.5m), too, given that Antonio Conte loves a wing-back substitution. In fact, Perisic – who thankfully is a defender in FPL – lasted 60 minutes in only 17 of his 32 Serie A appearances for Conte’s Inter Milan in 2020/21.

Ryan Sessegnon (£4.5m) remains a bargain buy, likely due to Perisic’s arrival, but Eric Dier (£5.0m), Matt Doherty (£5.0m) and Sergio Romero (£5.0m) are mid-price defenders and Hugo Lloris remains at £5.5m despite the fire-sale of premium goalkeepers elsewhere this weekend. The possible arrival of Djed Spence would add to Doherty’s competition at right wing-back but the former Wolves man is one for the watchlist if reinforcements don’t arrive.

Spurs had the third-best defensive record in the Premier League after Conte’s arrival, conceding just 24 goals and keeping 13 clean sheets in the Italian’s 28 fixtures in charge.

Categories: Uncategorized
Tags: advice, best captain, best chip strategy, best defenders, best differentials, best fixtures, best forwards, best FPL captain, best FPL managers, best FPL players, best FPL squad, best FPL team, best midfielders, best players to sign on FPL, best wildcard squad, budget defenders, budget forwards, budget midfielders, Captain, chip strategy, Fantasy Football, fantasy football scout, Fantasy Premier League, FPL, FPL Chip Strategy, FPL launch, FPL launch date, fpl match report, FPL match reports, FPL prices, free transfers, how do I play FPL, how to play FPL, how to win FPL, Injuries, Injury, injury latest, injury updates, new season, penalties, penalty takers, should I buy, should I sell, Should I use my free transfers?, Tips, transfer, transfer in, transfer out, transfers, Triple Captain, Update, Updates, what should I do with my chips?, What should I do with my free transfers?, What should I do with my Wildcard?, when are the fixtures released?, when does FPL launch, when does FPL return, when does FPL start, when does the new season start, when does the Premier League return?, when does the season start, when is FPL back?