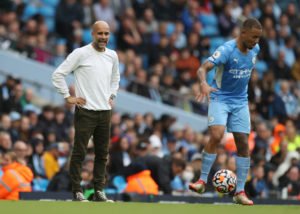 Gabriel Jesus has been priced up as an £8.0m forward by Fantasy Premier League (FPL) after his move to Arsenal from Manchester City.

He’s proving to be a popular initial selection, too, sitting in around 44% of embryonic FPL squads at the time of writing – although ‘auto-picks’ will account for some of that total.

With the Gunners recently letting Pierre-Emerick Aubameyang and Alexandre Lacazette go, Jesus has the chance to become a reliable FPL asset for the first time really in his Premier League career.

We assess the new Arsenal number nine in our Moving Target report.

And Jesus never really let Guardiola down. His 9,273 league minutes equates to 103 full games, with 93 goal involvements arriving at a rate of one per 99.7 minutes.

Yet two big problems have plagued his five-and-a-half years at the Etihad Stadium – Pep Roulette and sporadic stints playing on the wing.

The former meant Jesus never played more than 60% of minutes in a season and therefore rarely existed on the radar of most FPL managers.

The arrivals of Erling Haaland and promising Argentine Julian Alvarez was the final nail in the coffin for his time in Manchester.

Above: Starting positions, according to Transfermarkt

Despite City not replacing the departed Sergio Aguero and Ferran Torres, last season saw Gabriel Jesus used less often as a forward. He has spoken publicly about being fine with this.

“I feel comfortable out wide. I didn’t start to play as a winger just this season. I have played with the national team there for two years. I started to play in the first team of Palmeiras as a winger and I played sometimes when I arrived here as a winger as well. So I think I’m okay there.” – Gabriel Jesus

Furthermore, following a poor 2018 World Cup where he failed to score from five Brazil starts up front, Jesus seemed to confess to coach Tite that cutting inside from the flanks is his preference.

“I spoke with the Brazil coach not that long ago and he said that after the World Cup he called over Gabriel Jesus and asked him, ‘Where do you want to play?’ Jesus said ‘I don’t mind’ but the coach said, ‘Obviously you mind, you obviously have a preference, what is your preference?’ And, somewhat sheepishly, Jesus said he’d rather play out wide. This is important. [Mikel] Arteta knows him from Man City but that’s a while ago and things change.” – South American football expert Tim Vickery

Full-year memberships, monthly subscriptions and a *FREE* trial are all now available.