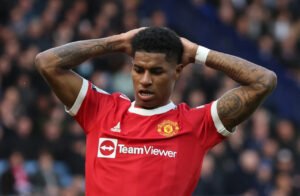 You rarely see a player falling in Fantasy Premier League (FPL) price after a successful season.

Be it because of injury, a dip in form or reduced minutes, there is nearly always a negative reason for a Fantasy asset losing value.

But that, in turn, could present us with some bargains in the following campaign.

Here we look at the biggest and most eye-catching price falls of 2022/23, asking if any of them can rediscover past glories and present themselves as Fantasy targets once again.

Marcus Rashford (£6.5m) is the biggest faller in price this summer and it’s a struggle to think of anyone else in recent years who has suffered such a dramatic drop.

One of the most expensive midfielders of 2021/22 is now priced up alongside such Fantasy luminaries as Youri Tielemans and Leandro Trossard, lying joint-25th when FPL assets in his position are sorted by cost.

While the scale of his drop was unexpected, there’s no question that he merited being slashed in price.

Six attacking returns was his worst ever season’s tally and a total beaten by the likes of Enock Mwepu (£5.5m) and Christian Norgaard (£5.5m), while no current £7.0m+ midfielder bar teammate Jadon Sancho (£7.5m) had a worse minutes-per-xGI figure than Rashford (252) in 2021/22.

Even discounting the stats, he was abject on the eye, too, plumbing such depths that teenage rookie Anthony Elanga (£5.0m) was often preferred ahead of him by Ralf Rangnick.

Can he rediscover former glories or is he heading the way of Dele Alli (£5.5m)? Rashford had plundered 47 attacking returns across his previous two campaigns, so there is some Fantasy pedigree there, and the arrival of new boss Erik ten Hag could present the England international with a fresh start.

“I don’t think I have had a proper pre-season since 2019 so for me, it is definitely a positive thing. I feel like I probably needed that time to switch off a little bit and me having that time enabled me to refocus a lot earlier than I expected to be honest.

“Like I say, I feel ready and focused so when that first game does come it’s good to know you have done almost six weeks of training beforehand. It will definitely be a positive.” – Marcus Rashford on his pre-season

Luckily, we FPL managers probably don’t have to make a call on him too early.

Manchester United sit near the bottom of our Season Ticker for fixture difficulty in the first quarter of the season, and it’s not until Gameweek 10 (or perhaps Gameweek 14) that their schedule looks more appealing:

There are plenty of other United players who have tumbled in price, of course, and Bruno Fernandes (£10.0m) is one of them.

A total of 10 goals and seven assists was significantly better than what Rashford produced but it simply doesn’t cut the mustard at £12.0m and it was way down on his previous achievements from 2020 to 2021.

In terms of positives, Fernandes was still the most-creative midfielder of last season with 88 key passes. He was also second for big chances created and fourth for goal attempts.

Above: This season’s most expensive midfielders sorted by xGI delta (that is, the difference between Opta’s xGI figure and what the player actually delivered in terms of goals and orthodox assists) in 2021/22

With a new manager arriving, penalties potentially reclaimed if Cristiano Ronaldo (£10.5m) leaves as expected and order restored when it comes to xGI overachievement, Fernandes is one for the watchlist for the autumn – although his starting position will have to be carefully monitored.

Ronaldo himself has dropped £2.0m but we won’t waste any column inches on him until we’re sure he’s staying in the Premier League.

Jadon Sancho (£7.5m) is another United player to fall by the same margin. He was worse even than Rashford for not just minutes per xGI but rate of actual goals and assists, averaging just 0.32 attacking returns per 90 minutes.

Leon Bailey‘s (£5.0m) debut season at Aston Villa was a bit of a non-event, with injury restricting his involvement to seven starts and 11 substitute appearances.

Arriving to some fanfare a year ago and bursting onto the scene with a goal and an assist against Everton in Gameweek 5, the bubble burst in the very same game when he limped off with a muscle issue.

Steven Gerrard liked Bailey enough to start him in two of his first three league matches as Villa boss and handed the winger some chances to impress from the start in April, when fielding him ‘out of position’ in a front two.

It just hasn’t happened for him at Villa so far but the surprising £1.5m price cut in FPL has drawn our attention to him and his minutes will be worth monitoring in pre-season to see if he is going to be anything other than an impact substitute under Gerrard. He further boosted his fitness with three run-outs – and a goal – in quick succession for Jamaica in June.

Due to the more compact pricing structure of goalkeepers in FPL, you simply won’t get the level of drop that we saw with Rashford above.

He’s now level in price with the likes of Kasper Schmeichel, Lukasz Fabianski and David de Gea, all of whom failed to reach double figures for clean sheets in 2021/22.

There is some method behind the apparent madness, however, as Mendy trailed all three of the above names for points last season.

Third among goalkeepers for clean sheets (14), Mendy’s cause wasn’t helped by just 14 save points and three bonus points. Contrast that with, say, Jose Sa (£5.0m), who delivered 31 and 11 of those respectively.

Having lost Andreas Christensen and Antonio Rudiger in the summer, the Blues are in the process of overhauling their defence. There are strong suggestions that Thomas Tuchel wants to move to a back four, too, which may make Chelsea a more open team. Improving on last season’s clean sheet tally of 16 looks a bit of a tall order, then, but having more to do between the posts might ironically make Mendy a better FPL buy.

As is the case with the goalkeepers, you won’t witness any Rashfordian drops in price amongst the defenders.

A cut in starting price of £1.0m was the biggest this year, with Leicester City pair Ricardo Pereira (£4.5m) and Timothy Castagne (£4.5m) two of the players sharing that dubious honour.

Only three clubs kept fewer clean sheets than Leicester (seven) last season but they were decimated by injury for long periods of that campaign and distracted by European club competition, so expectations will be higher this time around. Pereira was a £6.0m asset just two years ago and delivered 10 attacking returns and as many clean sheets in his debut campaign back in 2018/19.

Above: Ricardo Pereira was seventh among current £4.5m-and-under defenders for minutes per expected goal involvement/xGI last season (min 10 apps). The figures of the other Leicester full-backs are shown for comparison.

James Justin (£4.5m) of course presents some rotation risk to Pereira and Castagne, so pre-season will be keenly observed to see which full-back pairing Brendan Rodgers plumps for.

The good thing is that Leicester aren’t involved in Europe this season, so the Thursday-Sunday turnaround and managed minutes around Europa League games are no longer a concern. Apart from two instances where there are midweek Gameweeks, Rodgers can pick his strongest XI all the way up to the World Cup break knowing that his more fatigued or injury-prone players have a full week of recovery in between fixtures (note: there are two midweek Carabao Cup rounds in the autumn, too, but the blooding of second-string players will be expected in that competition).

Teammate Jonny Evans, who offers much less attacking threat but more security of starts if – and it’s a big if – he can keep fit, has also dropped from £5.5m to £4.5m.

Zouma’s drop is linked to the change of clubs, after he moved to West Ham from Chelsea at the back-end of August last season. The Hammers themselves struggled for clean sheets (eight) in 2021/22 but have bolstered their backline with the capture of Nayef Aguerd (£5.0m), with who Zouma looks set to partner.

Both of the right-backs currently on Manchester United’s books are available at £4.5m, so it remains to be seen which of Wan-Bissaka and Diogo Dalot (£4.5m) impresses new boss Erik ten Hag or indeed if the Dutchman brings his own man in.

Neither Dalot nor Wan-Bissaka registered a single attacking return last season, while United were a lowly 13th for goals conceded.

There are other midfielders and forwards who fell in excess of £1.0m but none of them are expected to make their respective sides’ first-choice XIs and might even be on the way out of the Premier League.

Ziyech looks almost certain to exit Stamford Bridge, while Pulisic has been linked with a part-exchange deal with Juventus in recent days. Pepe made only five league starts in 2021/22 and is also on the chopping block at Arsenal.

It’s a little early to write Daka off but he’ll only likely get game-time when Jamie Vardy (£9.5m) is injured and, even then, Kelechi Iheanacho (£6.5m) is also gunning for the same spot.

Have we missed any others in this round-up and do you have your eye on any of the players featured? Let us know in the comments section below.

Categories: Uncategorized
Tags: advice, best captain, best chip strategy, best defenders, best differentials, best fixtures, best forwards, best FPL captain, best FPL managers, best FPL players, best FPL squad, best FPL team, best midfielders, best players to sign on FPL, best wildcard squad, budget defenders, budget forwards, budget midfielders, Captain, chip strategy, Fantasy Football, fantasy football scout, Fantasy Premier League, FPL, FPL Chip Strategy, FPL launch, FPL launch date, fpl match report, FPL match reports, FPL prices, free transfers, how do I play FPL, how to play FPL, how to win FPL, Injuries, Injury, injury latest, injury updates, new season, penalties, penalty takers, should I buy, should I sell, Should I use my free transfers?, Tips, transfer, transfer in, transfer out, transfers, Triple Captain, Update, Updates, what should I do with my chips?, What should I do with my free transfers?, What should I do with my Wildcard?, when are the fixtures released?, when does FPL launch, when does FPL return, when does FPL start, when does the new season start, when does the Premier League return?, when does the season start, when is FPL back?, who should I captain?