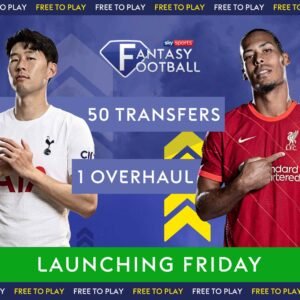 Sky Fantasy Football has relaunched for 2022/23, so you can head over there now and begin picking your team – or teams plural, as Sky allows you to manage a second XI (and a third from January).

The fourth and fifth-placed managers are awarded games consoles, as are the highest-scoring Fantasy bosses of the month.

HOW DO I PLAY?

Just like in Fantasy Premier League, managers select a team of players that will either earn attacking, defensive or bonus points in an attempt to score more than friends, colleagues and/or the rest of the world.

However, this is not a squad-based game: you simply choose a starting XI and do not have a bench.

We have already produced a beginner’s guide which delves deeper into the rules and scoring system – this can be accessed here.

There are a number of different ways to compete against others in the Sky Sports game, one of which is a Free League.

We have already set up our annual, free-to-enter Fantasy Football Scout mini-league, which you can enter by heading to the ‘Leagues’ tab and clicking ‘Join+’.

The full details are below:

HOW FFSCOUT MEMBERSHIP CAN HELP

Our Premium Members Area Opta stats can help you identify players who will potentially benefit from the Sky Sports bonus on offer for saves, tackles, passes and shots on target.

Annual subscriptions are available for a discounted £2.49 a month, billed annually.

Where FPL bosses effectively have three Wildcards to play due to the advent of unlimited transfers during the winter World Cup, Sky managers are going to have to think more longer-term.

Previously those playing Sky were allowed two Overhauls a season but this has been whittled down to one.

The Overhaul period will begin when the Premier League breaks for the World Cup and it will run until the domestic action resumes on December 26.

To help with that long-term planning, Sky have upped the free transfer allocation from 40 to 50 this season.

As was the case beforehand, a maximum of five can be used in one Gameweek (which run from Friday to Thursday as usual).

Previously Sky was very top-heavy in terms of player choice, with the majority of attacking options – such as Mohamed Salah – classified as forwards.

There’s been a revamp of the player classifications this time around, however, bringing it more in line with FPL.

NO MAN OF THE MATCH?

Conspicuous by its absence in the scoring section of the rules page was the ‘Man of the Match’ bonus, which has presumedly been scrapped for the new season.