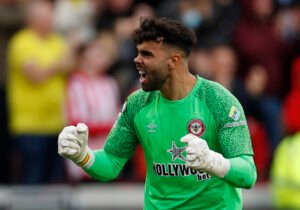 In these articles, we assess the Fantasy Premier League (FPL) players who had a quieter 2021/22, be it through injury, loss of form or otherwise, who we think have the potential to make an impact in the coming season.

The screenshots and data are from our Premium Members Area – sign up today for £2.49 a month (billed annually) to get access to all of these statistics and a whole lot more.

David Raya was one of Brentford’s best players in their debut Premier League campaign, as they ended in 13th place, 11 points clear of the relegation zone.

The 26-year-old featured in 24 games for The Bees despite missing a few months due to a knee injury, conceding only 27 goals and keeping eight clean sheets, form which earnt him a maiden international call-up for Spain.

In that time, Raya also collected five bonus and 20 save points, proving himself to be a very capable shot-stopper at this level.

The Spaniard ranked 17th in his position for FPL points, but matched Aaron Ramsdale (£5.0m) and Vicente Guaita (£4.5m) on a points-per-match basis, a record that placed him joint-fourth among regular starters, only behind Alisson (£5.5m), Hugo Lloris (£5.5m) and Ederson (£5.5m):

However, following his return to action in February, it’s fair to say The Bees and Raya stepped up a level.

From Gameweek 24 onwards, in 15 starts, Raya averaged 4.1 points per match, a tally only two regular starting ‘keepers could beat (see below).

Raya’s passing ability, which is crucial to the way Brentford try to play out from the back, is also worth noting, with only Alisson, Ederson and Robert Sanchez (£4.5m) surpassing his BPS pass completion total of 32.

“I’ve always felt comfortable with the ball at my feet, and we work on that every week. The manager wants us to be another attacker, an extra element in bringing the ball out, creating chances and passes, short and long.” – David Raya

“The goalkeeper could wear the number ten shirt. He has sent several incredible balls, exactly what you should do when you play against us.” – Jurgen Klopp on David Raya after Brentford’s 3-3 draw with Liverpool in September

After a stellar first season in the Premier League, Brentford will look to continue improving in 2022/23.

And their end-of-season form bodes well, as they won seven of their last 11 matches, keeping four clean sheets while only conceding 12 goals.

“We will keep the foundations from this year – the defensive side of the game, fitness and set pieces. Then we’d like to add a bit more on the offensive side of the game in terms of controlling games like we did against West Ham at home. That was a very good example of how I’d like us to dominate games even more.” – Thomas Frank

“I don’t believe in all this second season stuff or the narrative around it. That said, I know we can be relegated next season, but I also know we can finish seventh. Everything’s possible between 20th and seventh. We want to add layers, build and end higher and play better football. That’s the aim, but you never know what happens to a team when they get a lot of injuries or lose momentum. But hopefully we’ll avoid that and build.” – Thomas Frank

Brentford ended the 2021/22 season ranked eighth overall for expected goals conceded (xGC, see below), but the fact the players now look comfortable in a 3-5-2 and 4-3-3 offers encouragement that they can adapt tactically to different situations and maybe improve upon that defensive record.

Notably, the Bees have a sustained good run of fixtures right through until the World Cup break.

In fact, they don’t meet one of last season’s top four until Gameweek 12, while Tottenham Hotspur and Liverpool aren’t concerns until the festive period.

The big six sides they do encounter in Gameweeks 8 and 12 both have to come to the Brentford Community Stadium, too.

Now, with hopefully an injury-free season ahead of him, managers looking for value should consider Raya, who is perhaps the pick of the £4.5m ‘keepers on offer in FPL.