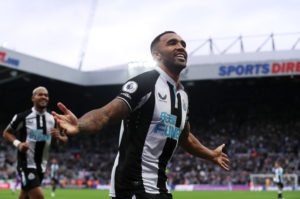 The ‘Sleeper’ series returns to the Fantasy Football Scout pages this summer.

In these articles, we assess the Fantasy Premier League (FPL) players who failed to live up to former glories last season.

With Eddie Howe an initial success in the Newcastle United hotseat and the Saudi money being splurged on more acquisitions, we assess whether Wilson can push his way back into our thoughts as an FPL asset.

All the stats for this piece are taken from our Premium Members Area, where you can get a whole heap of benefits for just £2.49 a month.

Wilson played a part in less than half of Newcastle United’s fixtures in 2021/22 and his injury record will be a recurring topic throughout this article.

When he did make it onto the pitch, he delivered: he found the back of the net on eight occasions in just 16 starts, delivering 0.52 goals per 90 minutes – an average beaten by just two first-choice FPL forwards, Cristiano Ronaldo (£10.5m) and Jamie Vardy (£9.5m), both of whom cost considerably more.

The more expensive Vardy, Ronaldo and Harry Kane (£11.5m) were among the few players in Wilson’s Fantasy position who averaged more points per start, too:

The underlying stats are less impressive, however.

A total of 28 other FPL forwards shot with more regularity than Wilson, while he languished 22nd for expected goal involvement (xGI):

Even the successful change of manager didn’t boost his numbers too much (his minutes-per-chance average, for example, was 39.2 under Steve Bruce and 40.3 under Howe), although we’re looking at small sample sizes in both cases.

Making the most of what few chances fall his way has been something Wilson has made a habit of.

As a general rule of thumb, a goal conversion around 20% or above is quite clinical – something Wilson has achieved in five of his last seven seasons, if we take the liberty to include 2016/17:

His record at Newcastle overall is pretty elite, with 20 goals, six assists and 204 FPL points arriving in 39 starts. String that record together over the course of one campaign (minus the 39th game!) and you’re into ‘Team of the Season’ territory, although ever-present status has been a pipe dream when it comes to Wilson.

The former Cherries hitman was similarly third among forwards for points per match (see below) in his debut Newcastle season in 2020/21 but again missed a third of the campaign through injury:

Whatever Wilson has acccomplished as an FPL forward in the past has generally been for a side at the wrong end of the table: in his seven seasons as a Premier League player, six of them were for a bottom-half club.

So there’s a little bit of intrigue as to what the former Bournemouth striker could achieve with better service and in a team targeting something greater than top-flight survival, something that will surely be the case in 2022/23 should Newcastle’s summer spending continue.

The Magpies’ goal threat indeed improved after they made their series of January acquisitions, with their xG per match rising from 1.0 to 1.4.

Matt Targett (£5.0m) was one of the leading chance creators in the division among defenders after the winter window, while we barely got to see Kieran Trippier‘s (£5.0m) undoubted assist potential due to a fractured foot. Ryan Fraser (£5.5m), Wilson’s sparring partner and creator-in-chief at Dean Court, was also excellent from February onwards.

Newcastle could probably still do with a real key pass merchant in midfield, however, a la Christian Eriksen.

While the service and ambition might be on the rise on Tyneside, that still leaves us with Wilson’s off-putting injury record.

His glass hamstrings will simply make him a no-go for some Fantasy managers (he has struggled to shake off the ‘troll’ tag for years) and he is a option who ought not to be bought without an accompanying exit plan.

Still, there are few (maybe no) other mid-price forwards available in FPL who have been as reliable for goals as Wilson when he has made it off the treatment table.

A lot of Fantasy managers pursuing a forward around this price will be plumping for Gabriel Jesus (£8.0m), whose Arsenal side have a very decent opening schedule.

But while the Gunners sink to third-bottom on our Season Ticker for fixture difficulty from Gameweeks 8-15, Newcastle are right at the top.

The Jesus to Wilson switch at this juncture, then, might be worth a thought – if he’s not in the physio room, of course.

Categories: Uncategorized
Tags: advice, best captain, best chip strategy, best defenders, best differentials, best fixtures, best forwards, best FPL captain, best FPL managers, best FPL players, best FPL squad, best FPL team, best midfielders, best players to sign on FPL, best wildcard squad, budget defenders, budget forwards, budget midfielders, Captain, chip strategy, Fantasy Football, fantasy football scout, Fantasy Premier League, FPL, FPL Chip Strategy, FPL launch, FPL launch date, fpl match report, FPL match reports, FPL prices, free transfers, how do I play FPL, how to play FPL, how to win FPL, Injuries, Injury, injury latest, injury updates, new season, penalties, penalty takers, should I buy, should I sell, Should I use my free transfers?, Sleeper, Tips, transfer, transfer in, transfer out, transfers, Triple Captain, Update, Updates, what should I do with my chips?, What should I do with my free transfers?, What should I do with my Wildcard?, when are the fixtures released?, when does FPL launch, when does FPL return, when does FPL start, when does the new season start, when does the Premier League return?, when does the season start, when is FPL back?, who should I captain?