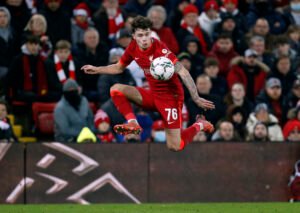 The 21-year-old right-back/wing-back helped Fulham get promoted to the Premier League last season after joining them on loan from Anfield in January.

“Despite being only 21, Neco has established himself in the Wales starting XI. He’s played in the Premier League, the Champions League and in World Cup qualifiers in the last 12 months and he is a very talented right-back.

“We believe that he’s got an incredibly high ceiling and that he can play a huge role for us at Nottingham Forest in our return to the Premier League. We’re delighted to have him on board.” – Steve Cooper

Notably, Williams will cost only £4.0m and won’t take up too much of your budget, but is the hype justified and can he become a Fantasy Premier League (FPL) option?

The stats in this piece are taken from WhoScored, with the heatmap courtesy of SofaScore.

Williams, 21, came through the academy at Liverpool and made his first-team debut against Arsenal in the EFL Cup in October 2019.

His impressive performance led to him being included in the squad for the FIFA Club World Cup, where he picked up his first senior medal.

In the second half of 2019/20, he continued his progress, earning himself a league winner’s medal after making six appearances in the squad’s title-winning campaign.

However, he has been restricted to just 22 appearances in all competitions since, with his path to the first team blocked by England international Trent Alexander-Arnold (£7.5m).

As a result, Williams joined Fulham on loan in January 2022 to continue his development, where he made 14 league appearances, scoring twice and assisting two goals for Marco Silva’s Championship winners.

Meanwhile, Williams has also featured in 21 matches for the Welsh national team, including three appearances at EURO 2020, and is expected to start at this winter’s World Cup in Qatar.

Forest head coach Steve Cooper had identified the wing-back positions in his 3-4-1-2 formation as key areas to strengthen after losing loanees Djed Spence and Max Lowe.

Now, their £17m move for Williams suggests they are unlikely to be able to buy Spence, who was a revelation for them at right wing-back while on loan from Middlesbrough last season, registering two goals and four assists in 41 Championship appearances.

As a result, we could see a new-look defensive set-up that looks something like the one detailed below.

There is also potential for Williams to feature as a left wing-back in a three, a role he has sometimes performed with Wales, something which only boosts his minutes expectations.

Above: Neco Williams’ season heatmap at Fulham 2021/22, via SofaScore

And it’s that attacking mindset that is appealing, something he often discussed during his time at Liverpool (see below). In fact, Williams rose through the ranks as a right-winger, before he was eventually moved back to a deeper role.

“Every time I play the main focus for me, when we’ve got the ball, is getting assists. The way full-backs have developed in the last few years, especially at Liverpool, it is all about trying to get as many assists as we can. You see it with Trent [Alexander-Arnold], with Robbo [Andy Robertson] and with Kostas [Tsimikas] and myself – we are all trying to help the team score to win games.” – Neco Williams

At the other end of the pitch, Cooper made a real improvement defensively after his appointment last season. Just 28 goals were conceded in his 38 matches in charge, with summer signings Henderson, Niakhate, Biancone and Richards further bolstering the backline.

The real appeal, however, is his bargain price tag of just £4.0m.

So, FPL managers on the lookout for a cheap ‘enabler’ may just have found their man, which will be especially interesting for those wishing to include three premiums in their opening squads.

Forest also have a decent run of fixtures, with their schedule from Gameweek 6-12 particularly appealing.

Some caution is of course required with so many new faces in Forest’s starting XI, with the versatile Biancone also able to play at right wing-back if needed.

But at £4.0m we can’t be too fussy, and it does feel like Williams is the ideal fifth defender at this point in the summer, providing you aren’t going ‘big at the back’.