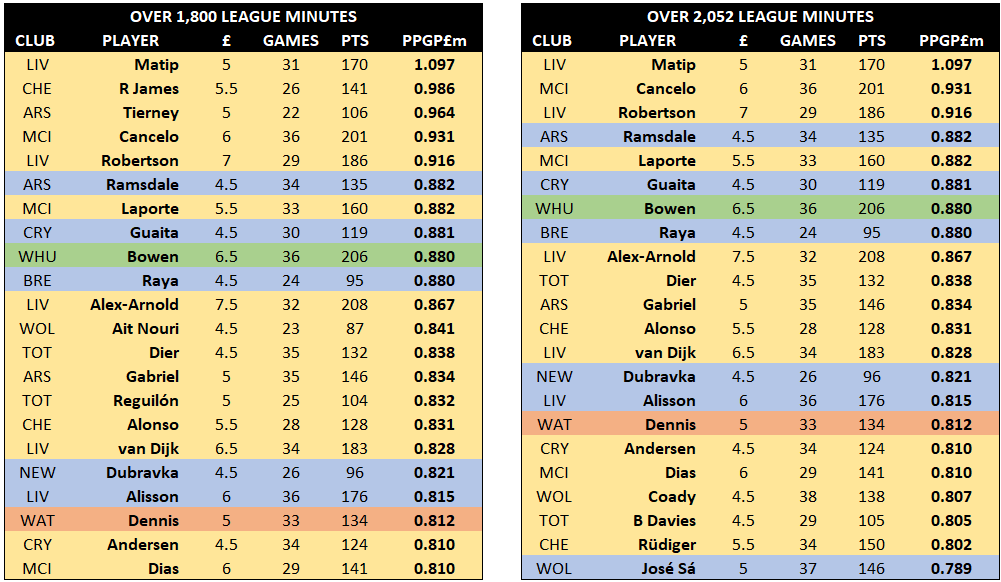 For students of Fantasy Premier League (FPL) statistics, the recent price reveals have enabled them to delve deep into finding new ways to perfect their Gameweek 1 squads.

Here, we will combine two popular stats into one number.

Although a golden piece of FPL wisdom usually advises managers to look forward, rather than chase past points, let’s try to determine which 2022/23 players offer the best value based on their 2021/22 performances.

Using last season‘s starting prices and the data from our Premium Members Area, these are the players with the best points-per-game-per-million (PPGP£m) scores in 2021/22:

This is unlucky on Ben Chilwell (£6.0m), who would likely take Marcos Alonso‘s (£5.5m) place on the list had he not suffered a serious injury. Until then, his six outings brought in three goals, three clean sheets and a whopping 54 points.

We can already see defensive domination, with three £4.5m goalkeepers sitting inside the top eight. Meanwhile, Jarrod Bowen (£8.5m) and Emmanuel Dennis (£5.0m) are the only attackers to reach the upper section.

This only intensifies now that the upcoming season’s prices have been released. Bargain attackers from last year such as Bowen, James Maddison (£8.0m) and Bukayo Saka (£8.0m) have had a steep increase in outlay, with Diogo Jota (£9.0m) and Kai Havertz (£8.0m) amongst those to now be categorised as forwards rather than midfielders.

Furthermore, many of last year’s players have been lost to relegation or transfers abroad, affecting the likes of Dennis, Antonio Rudiger and Sadio Mane.

Another mitigating factor is that Gabriel Jesus (£8.0m) and Richarlison (£8.5m) have switched Premier League clubs over the summer. Whereas Jesus has left a squad role at Manchester City to likely become the focal point at Arsenal, the reverse is probably happening to Richarlison. For them, the last campaign’s points-per-game data is therefore irrelevant.

Now we take a look at PPMG£m using this year’s prices.

Matip’s numbers were so strong that the subsequent £1m rise hasn’t knocked him down, although it’s a surprise to see Tierney so high. His 22 starts brought 11 clean sheets and four attacking returns but he was overshadowed by much-owned teammate Aaron Ramsdale (£5.0m).

Once those under 60% playing time are removed, it leaves a trio of Liverpool names on top. A big talking point of price reveals was the drop of goalkeeper Alisson from £6.0m to £5.5m, who now offers a genuine budget-saving supplement to Alexander-Arnold or Robertson.

A handful of these leading names are likely to remain avoided. Sergio Reguilon (£4.5m) couldn’t reach 2,052 minutes and that’s before Ivan Perisic (£5.5m) arrived, whilst Marcos Alonso (£5.5m) continues to be linked with a move to Barcelona.

Of course, saying that there is more value in defence isn’t news to anyone. So let’s specifically look at midfielders and forwards.

Up front, it was a bad season in FPL and the numbers back this. The two best-value forwards – Dennis and Armando Broja – were only there because of a £5.0m starting price, with one departing via relegation and the other returning to parent club Chelsea. Second-best midfielder Conor Gallagher (£6.0m) is also back in west London.

Said Benrahma remains at £6.0m. Although two goals and two assists in the first pair of games quickly saw him gain popularity, it just as swiftly died out. What may have been ignored is that – while colleague Bowen developed into a must-have asset – Benrahma did continue to be fairly productive despite managed minutes.

From Gameweek 19, the Algerian international registered five goals and three assists from 11 starts.

Points per million per game is, of course, a basic route into FPL team value.

We can’t just create a team of FPL assets based on ‘PPGP£M’ as we’ll inevitably end up with a huge wad of unused cash in the bank, due to the fact that Salah, Kane et al will struggle to feature in the above tables. Value Over Replacement Player (VORP) takes this to the next level and is something that has been written about at length by our clued-up community over the years.

But it’s a decent starting point for making a rudimentary comparison of, say, two players of the same position and price: Robertson and Cancelo, for example.

Categories: Uncategorized
Tags: advice, best captain, best chip strategy, best defenders, best differentials, best fixtures, best forwards, best FPL captain, best FPL managers, best FPL players, best FPL squad, best FPL team, best midfielders, best players to sign on FPL, best wildcard squad, budget defenders, budget forwards, budget midfielders, Captain, chip strategy, Fantasy Football, fantasy football scout, Fantasy Premier League, FPL, FPL Chip Strategy, FPL launch, FPL launch date, fpl match report, FPL match reports, FPL prices, free transfers, how do I play FPL, how to play FPL, how to win FPL, Injuries, Injury, injury latest, injury updates, new season, penalties, penalty takers, recommended, should I buy, should I sell, Should I use my free transfers?, Statistics, Tips, transfer, transfer in, transfer out, transfers, Triple Captain, Update, Updates, what should I do with my chips?, What should I do with my free transfers?, What should I do with my Wildcard?, when are the fixtures released?, when does FPL launch, when does FPL return, when does FPL start, when does the new season start, when does the Premier League return?, when does the season start, when is FPL back?, who should I captain?