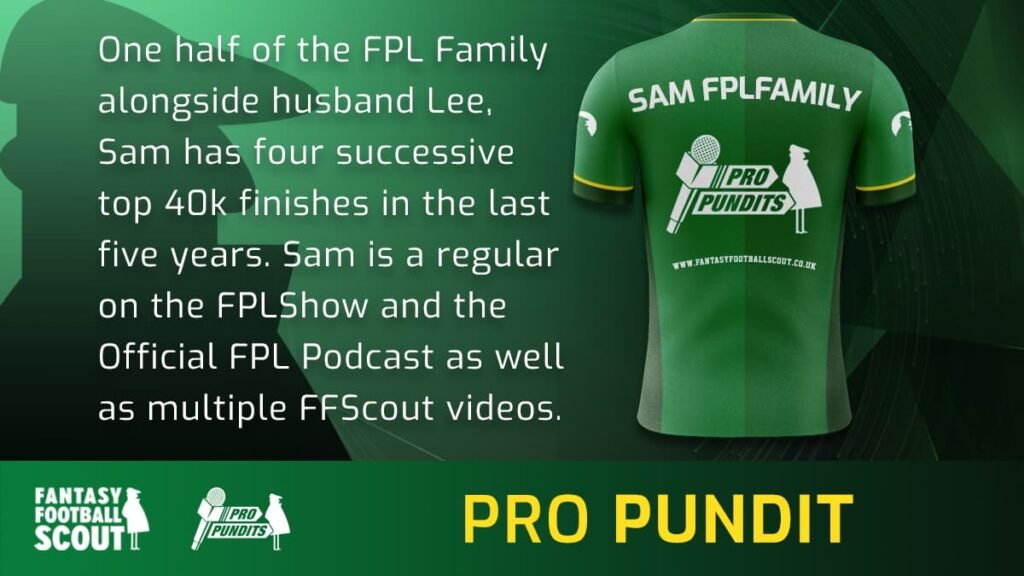 With the start of the new Fantasy Premier League (FPL) season not too far away, we’re welcoming back our team of Pro Pundits and Hall of Famers for the new campaign.

Next up is FPL Family’s Sam.

Sometimes in FPL you just can’t catch a break. The 2021/22 season started well enough for me but the impact of Covid-19 around Christmas massively impacted my team. Multiple Gameweeks without a full starting XI, points hits and some stubbornness on my part meant my season started to unravel.

This was capped off by some bad navigation of chips. My second Wildcard saw me swap Son Heung-min (£12.0m) for Harry Kane (£11.5m), just before Son went on his points-scoring hauls. Meanwhile, saving my Free Hit for Gameweek 38 saw my overhauled team score less than my original line-up would have done. FPL is definitely a rollercoaster at times!

Even though my season ended in freefall, that’s part of what we love about Fantasy Football. I learned a lot about my FPL management style last season and heading into the new campaign, things can only get better.

The World Cup in November and December will have a big impact on the FPL season. This is why I was delighted to see that Official FPL have added an unlimited transfer window in between Gameweeks 16 and 17, when we pause for the international action in Qatar.

This unlimited transfer window will change my FPL thinking. I am normally a manager who likes to hold their first Wildcard until as late in the window as possible. However, now I will be looking to activate it earlier to ensure that I can maximise it’s full potential.

My early thought is that I will aim to play my Wildcard after Gameweek 8. Between Gameweek 8 and Gameweek 9, there will be an international break. This makes perfect sense as a Wildcard week. Obviously, this aids my FPL planning as I know I am picking a squad for the opening eight Gameweeks only.

When building my opening squad for a new season I like to keep the different price points in mind. Doing this means that I feel able to act quickly and move to the in-form players without having to disrupt the rest of my team. For example, the £8.0m midfielder bracket looks key. Having one or two £8.0m players in my opening squad means that I will be able to adjust to the others if someone is performing better.

Arsenal and Man City both have excellent opening fixtures and therefore I like the idea of starting with Bukayo Saka (£8.0m) and Phil Foden (£8.0m). Knowing that they are easily moved to another excellent £8.0m option makes them increasingly attractive.

I’ll be owning at least one player in this bracket in the opening weeks of the season. If they perform well then they will stay until Wildcard; if they underachieve then they are easily moved to another FPL option.

There are so many players that I want to own ahead of Gameweek 1 but fitting them all in is difficult. My original thinking is to start with Harry Kane (£11.5m) for Gameweek 1 and then move to Erling Haaland (£11.5m) ahead of Gameweek 2. I would like to afford Son Heung-min (£12.0m), too, but finding the additional £4.0m to upgrade Foden is proving difficult.

There are some potentially good £4.0m defenders in the game. Everton‘s Nathan Patterson (£4.0m) could benefit from an injury to Seamus Coleman (£4.5m) and will be worth watching in pre-season. Neco Williams (£4.0m) could also get game-time after a loan move to Nottingham Forest.

Jack Colback (£4.5m) is a player that could potentially fill the budget midfielder spot but as is the case with the defenders, I will be keeping a close eye on pre-season form to determine who is the best option in this bracket. Andreas Pereira‘s (£4.5m) transfer to Fulham also marks him out as a leading budget midfield candidate.

Gabriel Jesus‘ (£8.0m) performance during his Arsenal debut has put him firmly on my radar too. If this continues across preseason then I will likely look to free up some additional budget to move Ivan Toney (£7.0m) to him. However, I do like the Brentford fixtures between Gameweek 1 and my likely Wildcard window.

There are a few positions and players here that would definitely change. I would like to find the extra money for Joao Cancelo (£7.0m) over Kyle Walker (£5.0m). Allan Saint-Maximin (£6.5m) could easily be Bruno Guimaraes (£6.0m), Pedro Neto (£5.5m) or a Brentford midfielder if I do go with Jesus over Toney.

There’s still a lot of tinkering to do with this team. With three weeks to go until the Gameweek 1 deadline, it will be important to keep an eye on the transfer window as well as pre-season form.