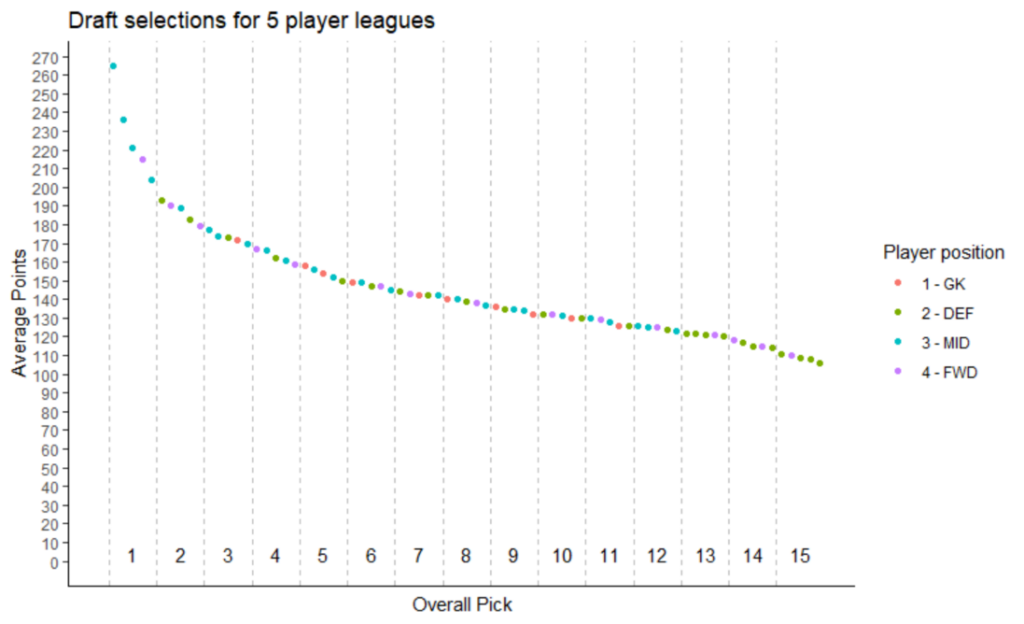 Fantasy Premier League Draft is free to play and runs parallel with old-school FPL. If you’re already registered for the long-running FPL game, you can also immediately get involved with Draft.

Draft uses exactly the same scoring system as FPL with only one exception: there are no captains or vice-captains. There are also no chips or Wildcards.

The biggest difference, of course, is that no two managers in the same mini-league can own the same player.

READ MORE: How to Play FPL Draft – A Beginner’s Guide

Here, community writer Rdrake1990 talks us through some tips for the draft process.

I’m in a five-team FPL draft league with some friends from school. I was leading for 24 out of the 38 weeks in 2021/22 and went into the final week with a two-point lead. Unfortunately, I had a bad final week and my rival had a good one and I ended up 34 points back – which oddly was the biggest gap between first and second all season.

Of course, this hurt. But when I looked at our original draft squads it transpired I had the worst one in the league, but I did well picking up players on waivers. This got me wondering: what is the best order to pick players in the initial draft, and how well did the winners of other five-team leagues do at picking at the start of the season?

Firstly, you can see here just how large the drop-off is in quality during potential round one picks. The very best midfielder (in recent years, almost always Mohamed Salah for what it’s worth), is usually worth about 30 points more than the second best one, and 60 points better than the fourth or fifth best, who’d still be a round one pick for someone. In the existing version of FPL Draft, it’s just random who gets handed this potential advantage, although personally, I’d like to have the option of rolling over a league and giving the first pick to whoever finished bottom the season before.

The second thing that sticks out is that after round one and two, there are only about 40 or 50 points between the players you’re picking up in rounds three or four and those coming right at the end in an ‘optimal’ selection. What this says to me is that there are probably lots of ways to win in the draft, and that all is not lost if you draft badly. This also matches up with my experience this year.

But supposing we want to pick the best possible players right from the start, what order should you pick them in?

The very best forward probably creeps into being a first-round pick but basically, everyone’s first pick should be a midfielder. This means that in round two, you probably want a top forward, and then probably in round three you should see people taking the best defenders. After round three, it’s more of a mixed bag in the middle rounds, but based solely on total points, the best order is probably something like:

The big surprise here for me was the goalkeepers appearing so high, especially the second one. The truth is you can only play one at a time, so unless you are specifically rotating yours through the season, in practical terms it makes sense to wait until the end to pick your second one. In a five-team league, everyone can have two top ten side keepers, after all.

Anyway, that’s an attempt at an optimal order, but how did winning managers this season draft theirs?

To answer that question, I’ve looked at the initial draft picks across all five-team leagues, selected out the managers who finished first, and then added up how many times each position was selected in each round.

The order below is the order that maximised the overall frequency among league-winning managers:

The winners go heavy on midfield early, and then don’t return to it until the middle rounds when they go hard again. They also have every position covered at least once in the first five rounds. They also pick a forward early, one in the middle, and one towards the end.

In many ways, these selections reflect how you might allocate a budget in the regular FPL game: a few expensive attacking players, a couple of premium defenders and a premium goalkeeper, and the rest made up with budget slot-fillers, and a clear leaning towards a 3-5-2 formation. The optimal selection, however, picks each position at more regular intervals.

In terms of how often managers made these choices, 74% of winning managers go for a midfielder in round one and 42% go for their second midfielder in round two. At the other end of the draft, 57% waited until round 15 to pick up their second goalkeeper and 43% waited until round 14 to fill in their fifth defender slot, with 25% of fourth defenders taken in round 12. The managers clearly have their early slots and late slots pre-determined in terms of positional coverage, and play the middle rounds a bit more by ear.

The data leaves me pondering a choice between following the wisdom of other winning managers or blindly following the data and seeing what happens.

The reality is that I love the idea of just going with what the numbers say but I’ll get to draft day and talk myself out of picking Jose Sa as my second keeper in round 10 over snapping up James Ward-Prowse as my fourth midfielder, and the experiment will be ruined.

But even in that scenario, I’ll take comfort from both my own lived experience that there really isn’t that much difference between the totals scored by round four picks and round 12 picks, and that even the very worst initial drafts in the league are recoverable with good transactions over the season.