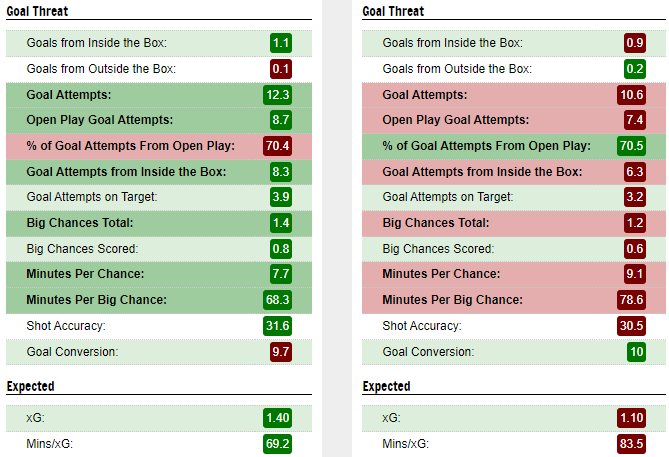 Everton are up next, with the focus here on the Frank Lampard era that started in Gameweek 24 of 2021/22.

It was a bit of a miserable picture from an attacking perspective after Lampard’s appointment, with only the three relegated clubs scoring at an inferior rate to the Toffees (1.06 per game).

They were bottom-five material for everything from shots to xG, too.

Using our Team Comparison tool to assess Everton before and after Lampard’s appointment, we can see that there was even a downward turn in the underlying numbers from Gameweek 24 onwards:

Above: Everton’s underlying attacking numbers from Gameweeks 1-23 (left) and Gameweeks 24-38 (right). Most figures given are per game.

Lampard could even call upon Richarlison (£8.5m) and an admittedly rusty-looking Dominic Calvert-Lewin (£8.0m) for much of his tenure, with the former now packed off to Tottenham Hotspur.

The rest of the underlying defensive data was less impressive as Jordan Pickford (£4.5m) was kept busy, making more saves per 90 minutes (3.76) than all bar two other first-choice goalkeepers.

A comparison of the numbers pre and post-managerial change reveals something of a mixed bag, with big chance concession and xGC not really altering to a significant level:

Above: Everton’s underlying defensive numbers from Gameweeks 1-23 (left) and Gameweeks 24-38 (right). Most figures given are per game.

James Tarkowski (£4.5m) has been brought in over the summer to bolster the backline, with an improvement at defending free-kicks and corners surely a priority: only Leicester had a worse xGC from set plays last season, something that was the case both before and after Lampard’s appointment.

A motley collection of opening games sees Everton rank lower-mid-table for fixture difficulty in Gameweeks 1-8, which will be enough to deter many FPL managers from considering the Toffees as viable options.

The concern would be a continuation of their abysmal away form of last season, as most of their early ‘winnable’ matches come on the road.

European qualifiers Chelsea, Liverpool and West Ham all visit Goodison Park between now and the international break. That trio of clubs plus Arsenal were among the division’s seven highest-scoring teams in 2021/22, so multiple clean sheet opportunities don’t leap off the page.