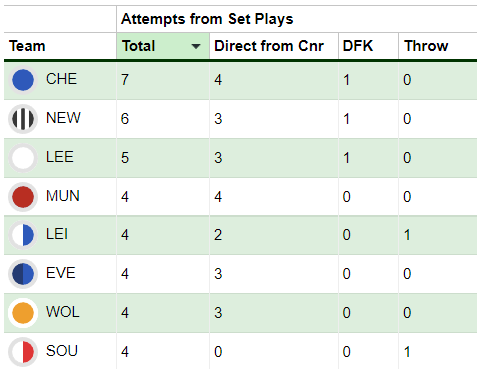 Amongst all the excitement of the opening weekend, Fantasy Premier League (FPL) managers get to take their first look at new imports and tactical systems.

Part of this is quickly identifying each club’s main set-piece takers, some of which could become fantastic FPL assets.

Based on the data collection in our Premium Members Area, here is a breakdown from the latest round of matches.

Initial observations are that, for many teams, not much has changed from what we already knew. Names like Trent Alexander-Arnold (£7.5m), Son Heung-min (£12.0m) and Kieran Trippier (£5.0m) dominate their team’s set-piece duties, as they did for much of last season.

Whether Reece James (£6.0m) remains as prominent at corners for Chelsea, after some dismal deliveries against Everton, is another question, particularly with Mason Mount (£8.0m) sniffing about.

Elsewhere, Brentford midfielder Josh Dasilva (£4.5m) was named on the bench but came on for the final half hour to both equalise and take three of their corners. If and when he gets into Thomas Frank’s starting line-up, his value could prove very tempting too.

Also of note are new Bournemouth and Leeds signings Marcus Tavernier (£5.0m) and Brenden Aaronson (£5.5m), who have swiftly become involved at set pieces at their respective new clubs.

Tavernier’s brother James is a renowned specialist at Rangers, scoring another free-kick against Livingston last week; it must be in the family.

Chelsea and Newcastle United lead the way for total shots from set plays in Gameweek 1, with the Blues totalling 16 corners during their 1-0 win at Everton.