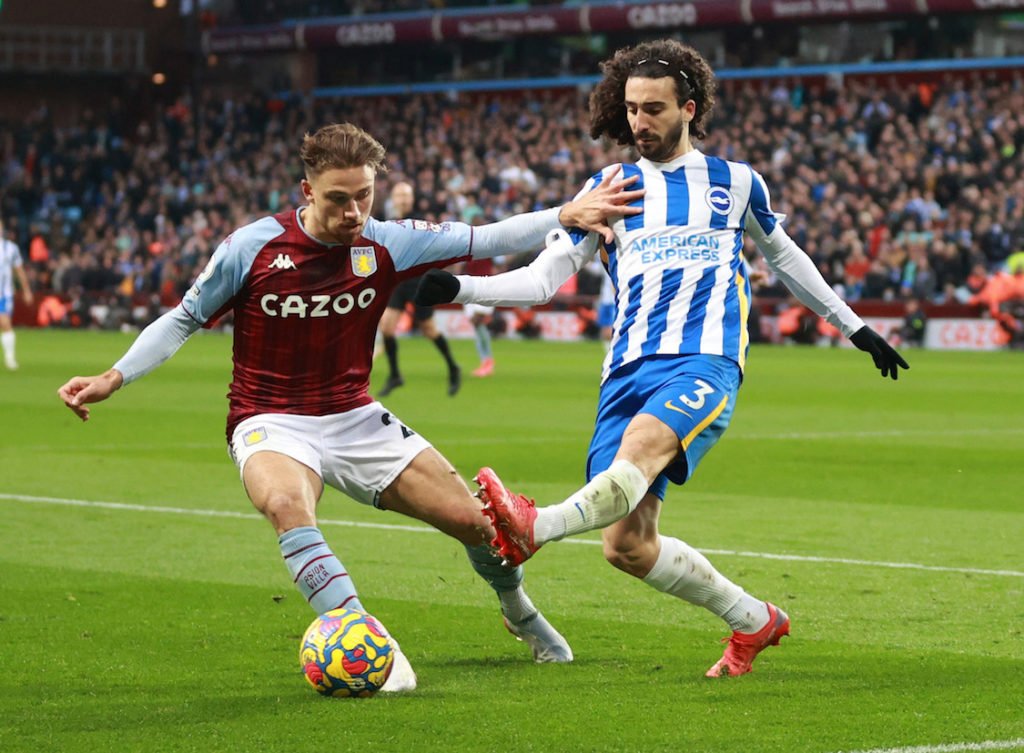 After a summer of continuously being linked with a move to Manchester City, confirmation arrived on Friday that Chelsea had swooped in to purchase defender Marc Cucurella (£5.0m).

The Spaniard excelled in his one year at Brighton and Hove Albion and won both of the club’s Player of the Season awards, having played the majority of it at left wing-back but ending as a centre-back.

Eyebrows were raised at the £55m fee, with potentially another £7m of add-ons, but the west London side believe they have bought quality in two positions.

We assess the versatile Chelsea arrival in our Moving Target report.

Born and raised in Catalonia, a young Cucurella progressed through Barcelona’s famous La Masia academy but failed to ever play a single minute of senior league football.

Two loan spells at fellow La Liga sides Eibar and Getafe brought regular starts before the latter activated their option to buy him.

12 months later, the excellent scouting system at Brighton recommended the Spanish international for a £15m Premier League move and it immediately became clear that a top-level player had been acquired.

The Seagulls conceded the second-fewest goals outside of last season’s top four, bagging 11 clean sheets in the process.

Yet, despite being a bit of a bonus magnet, Cucurella’s lack of attacking returns restricted his Fantasy Premier League (FPL) potential.

From 26 games as either a left-back or left wing-back, the 24-year-old registered no more than one goal and one assist.

This is despite taking 709 touches in the final third – only topped in defence by Joao Cancelo (£7.0m), Trent Alexander-Arnold (£7.5m) and Andrew Robertson (£7.0m) – and creating the sixth-most chances of those in his position (42).

Data collected from our Members Area

However, he ranked joint-fourth throughout the whole league for tackles won (93). Combine this with making the most recoveries of all defenders (247) and suddenly head coach Graham Potter was experimenting with Cucurella in his back three.

According to Transfermarkt, he started seven of the final nine matches from there – four of which ended with a clean sheet.

WHERE CUCURELLA FITS IN AT CHELSEA

The early quotes of Chelsea boss Thomas Tuchel suggest he sees Cucurella as both a centre-back and a left wing-back.

“I don’t want to get too excited but I have the feeling we signed the new (Cesar) Azpilicueta, in terms of his mentality, attitude, even in terms of his position – just with a left foot. He can play in the back three, he can play wing-back and he is a very nice, very humble guy with his personality.” – Thomas Tuchel

Saturday’s debut cameo against Everton put him out wide for 15 minutes, as Tuchel is still hesitant to give Ben Chilwell (£6.0m) minutes until he has fully-recovered from his long-term knee injury.

“We played with Ben Chilwell who was not, for me, 100% ready to start but the situation with Marcos Alonso and the late signing of Marc Cucurella made it necessary that we took the risk.” – Thomas Tuchel

The Marcos Alonso (£5.5m) situation referred to is his imminent sale to Barcelona.

IS CUCURELLA WORTH BUYING IN FPL?

Assuming Alonso departs, the versatility of Cucurella is probably a good thing for Premier League starts – especially if Chelsea are unable to buy another centre-back such as the heavily-rumoured Wesley Fofana (£4.5m).

This would make him both a first-choice centre-back and a regular Plan B for Chilwell, all at a very low £5.0m price.

The Blues’ fixtures are very good from Gameweek 3 onwards, although many FPL managers will likely decide that the explosive attacking abilities of Reece James (£6.0m) are worth the extra million.

Currently on 8.1% ownership, Cucurella is a cheap way into one of the league’s best defences for those without goalkeeper Edouard Mendy (£5.0m). There is even potential for a double-up.

This makes him definitely worth considering, although purchasing another defender would likely become one risk too far.