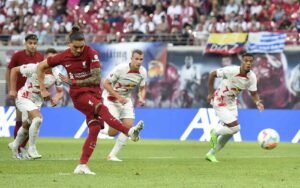 We bring the curtain down on the weekend’s Fantasy Premier League (FPL) action and look ahead to Gameweek 2 in The Digest.

Just as he did against Manchester City in the Community Shield, Darwin Nunez made an instant impact upon his introduction at Craven Cottage.

The forward came off the bench to both score and assist for nine FPL points, and it now feels like a matter of time before he is installed in Jurgen Klopp’s first-choice XI.

And when starting regularly, FPL managers will be faced with a decision over which three Liverpool players to own.

Trent Alexander-Arnold (£7.5m) and Mohamed Salah (£13.0m) will most likely take up two spots for the majority, but which of Darwin Nunez, Luis Diaz (£8.0m) or Andrew Robertson (£7.0m) should join them?

While far from their best in Gameweek 1, Liverpool created plenty of chances. In fact, they produced four big chances to Fulham’s one, which arrived from the penalty spot.

Darwin was introduced after 51 minutes but managed to get on the end of three of those big chances, with Luis Diaz failing to register a single attempt on goal in that time. It’s also worth noting that the Uruguayan registered four shots against Man City in the Community Shield, despite only coming on after an hour.

There have been a lot of questions about how Klopp’s side might work this season with a traditional number nine, and the early signs are certainly encouraging for Darwin. However, further analysis is surely required before deciding on the best Liverpool three.

“We had the feeling that we could find him more… now we have him and when the defence is high with open space, these guys have to find him. When you have this open space and Kevin (De Bruyne), it’s difficult to stop him.” – Pep Guardiola on Erling Haaland

As far as introductions go, it wasn’t a bad one, was it?

Erling Haaland’s two goals, maximum bonus and 13 FPL points, plus some truly explosive pace and movement in the final-third, was simply outstanding to watch.

The Norwegian had five shots over the course of his 78 minutes on the pitch – more than twice as many as any team-mate – and also ranked top for opposition box touches, with 10.

“There are few players you see that have absolutely everything. The physicality, the strength, the power, the finishing, the understanding, the timing – they are unique. You could play against a Zinedine Zidane or a Ronaldo (the Brazilian one) when we were playing and think, ‘There is nothing I can do here’. There will be defenders in the Premier League who won’t make mistakes and be helpless. He’s too strong, too quick. It’s almost an unfair competition. He is unplayable. He is a giant and is still young, so if he stays fit, the rest are in big trouble.” – Gary Neville on Erling Haaland

Elsewhere, City’s use of Kyle Walker (£5.0m) and Joao Cancelo (£7.0m) was interesting, as they took up narrow midfield positions in Man City’s 2-3-5 build-up shape, which is captured on their respective touch heatmaps below.

“I like to have a lot of players in the middle, it is like the kitchen in the apartment. We just want to create.” – Pep Guardiola

If a similar system is deployed again, it could be good news for City’s two number eights.

On Sunday, that was Kevin De Bruyne (£12.0m) and Ilkay Gundogan (£7.5m), both of whom were able to push up high and close to Haaland, knowing Walker and Cancelo were covering in behind alongside Rodri (£6.0m).

THE KANE TO HAALAND TRANSFER

Going back to Haaland, there is clearly more to come from the big man, which is why his double-digit haul has already caused a transfer frenzy in FPL.

The Norwegian is the most-brought player ahead of Gameweek 2, having been snapped up by over 750,000 Fantasy managers at the time of writing.

However, the move has had a knock-on effect: Harry Kane has been sold by over 600,000, forcing a price drop in the early hours of Monday morning.

For those who made the move, it involved a £0.2m swing and is probably justified given their Gameweek 2 fixtures. Longer-term, however, it is perhaps still open for debate.