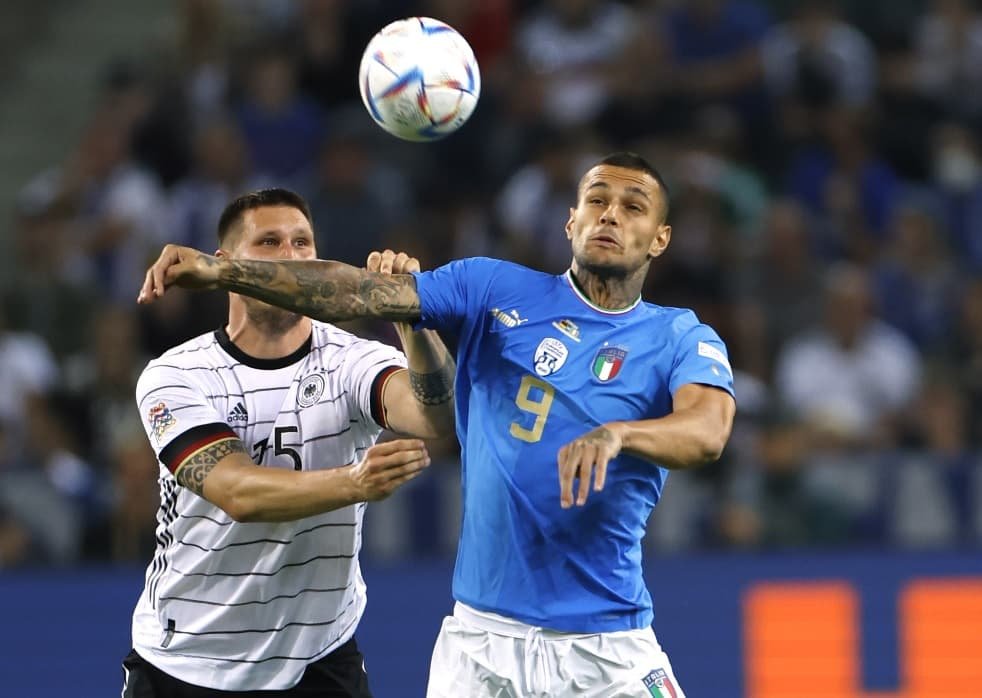 The 23-year-old arrives from Sassuolo for a fee of around £30.5m and will hope to succeed where other Hammers forwards have not in recent years.

None have arrived to ease the burden on Michail Antonio (£7.5m) since 2019, such were the disappointments of Sebastien Haller, Javier Hernandez and Simone Zaza.

So, where does the Italy international fit in at David Moyes’ side and what impact will he have in Fantasy Premier League (FPL)?

Born in Rome, Scamacca totalled six years in the academies of Lazio and Roma before making a surprise move to Dutch side PSV Eindhoven at the age of 16.

With Holland being a proven breeding ground for many years, the plan was for the youngster to break into the PSV line-up and use it as a stepping stone for a bigger move.

He was quickly back in Italy though, signing for Sassuolo in January 2017, a side who themselves have mastered the transfer market over recent years and provided ready-made talent for Serie A’s biggest outfits.

Loan spells at Cremonese, PEC Zwolle and Ascoli led to his first full top-flight campaign at Genoa in 2020/21.

Netting in the derby against Sampdoria certainly didn’t hurt his popularity, going on to score seven more times before being deemed ready for a run as Sassuolo’s focal point.

It was a wise decision, with Scamacca scoring 16 times and doing enough to earn his first seven caps for Italy.

At a height of 6ft 5in, FPL managers are right in assuming that Scamacca is good in the air. WhoScored directly refers to aerial duels as one of his best attributes, with regular comparisons back home to Zlatan Ibrahimovic.

Yet last season’s 16 league goals showcased many types of finishes, including tap-ins, long-range strikes, direct free-kicks, headers and one penalty.

Right-footed, his expected goals (xG) total of just 10.8 can either be interpreted as a campaign of overachievement or prolific finishing. With this being the first season in which he has ever exceeded 10 goals in a single campaign, there may be a degree of scepticism.

WHERE SCAMACCA FITS IN AT WEST HAM

FPL managers will certainly be interested in seeing if Scamacca links up well with the crosses of Aaron Cresswell (£5.0m). The left-back already has the giant Tomas Soucek (£5.5m) to aim set-pieces at but, using stats from our Members Area, we see he is one the most regular crossers amongst all defenders.

Two seasons ago, Cresswell assisted 11 times and perhaps the addition of Scamacca will benefit the prospects of both.

Over a fifth of Scamacca’s efforts were headers last season, including three of his 16 goals.

Scamacca was limited to a cameo appearance in Gameweek 1, with Moyes stating he is “a little bit behind” due to the transfer’s interference with pre-season. He still found time to force a good save from Manchester City goalkeeper Ederson (£5.5m), although the header would’ve been ruled out for offside.

However, it seems that Scamacca will initially be sharing minutes with Antonio – which immediately dents the FPL prospects for both.

“I see his link-up play and his build-up play are very impressive. He’s 23 at the moment and that’s young for someone to come into the Premier League, so I’m looking and will have to give him time. We’re not going to push him on too hard, too quick, because we want to bring him on and we want to get him right and then bring him in when we feel he will be ready to show his qualities.” – David Moyes

IS SCAMACCA WORTH BUYING IN FPL?

It’s very much a wait-and-see situation with the forward on the back of Moyes’s comments.

Our Season Ticker does say that West Ham have the second-best fixture run between Gameweeks 2 and 11.

But although they coped well with last season’s congested schedule, it’s worth mentioning that qualifying for the Europa Conference League group stage would bring another long period of midweek matches.

From Gameweek 2 until players are released for the World Cup in November, each midweek will have either a league, Europa Conference League or EFL Cup match. There is also an international break to factor in September.