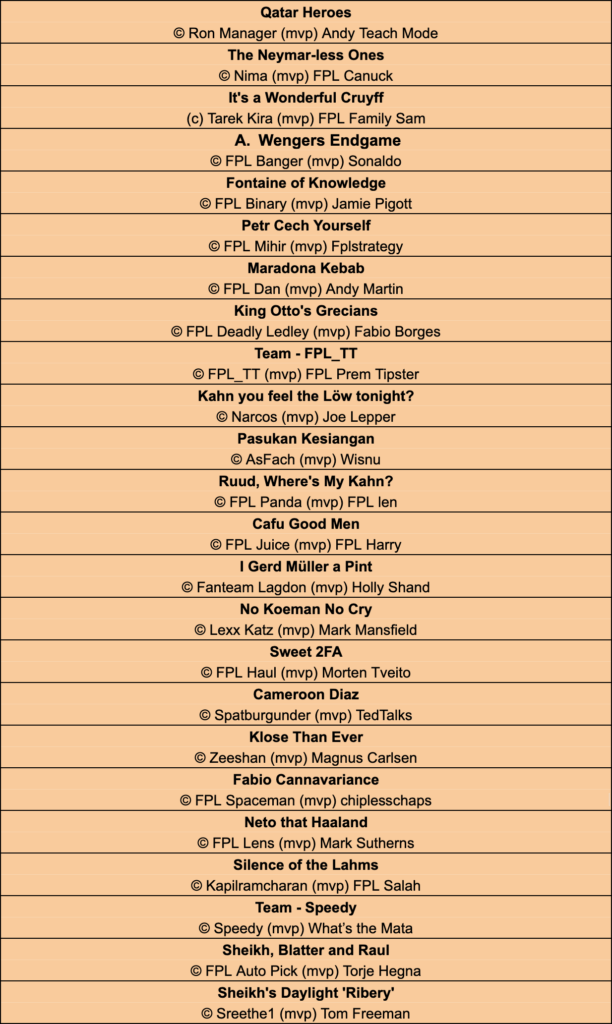 There are some hamsters on the pitch, they think it’s all clover

World Cup fever is sweeping across the FPL community. The symptoms are early optimism, and occasional bouts of euphoria, followed by a descent into mid-table obscurity. It is 100% addictive; there is no cure; and the worst cases can be seen wandering the multiverse adorned in pink sashes, dodgy crowns, and wooden spoons. The only way to deal with this outbreak is to double-down, so this season we’re going supersized with 48 teams, 808 participants, and more prizes than ever. Who needs a cure for this?

There will be two leagues, appropriately named Jules and Rimet with 24 teams in each, all of whom play each other once. What happens next depends on how well you do (my tip: make sure you’re in the Top 8); but there will be H2H matches to determine the true league champions, followed by knockout rounds to decide who gets the shiniest trophies, and who goes to the Hall of Shame.

Every team gets their own resident ringer, and in a keenly contested draft Fabio Borges emerged as the number one pick, followed by Tom Stephenson, Seb Wassell, FPL Salah, Pras, Lateriser, Holly Shand, Tom Freeman, Mark Sutherns, and Sonaldo. You can’t argue with any of those selections, unless you’re Az, and it’s great that our elite managers have embraced the madness.

Hats off to the Team Managers who also embraced the opportunity to get creative about their World Cup themed names, logos, and team reveals; and for the rest, get a wiggle on. Qatar Heroes deserve credit for being on message; Sheikh, Blatter and Raul reminds us how we got here; and we’ll need Klinnsman – FPL Secret Service and Cafu Good Men with Weah Robben Banks about. My favourite is It’s a Wonderful Cruyff who I assume will have Bailey leading the line and Potter in the Boardroom. I have to give GauravGharge credit for testing the limits of Boris’ spreadsheet with Seven! Seven! Seven! Seven! Seven! Seven! Seven! SEVEN! but in future I’ll either round it up to 56 or call them Len Goodman.

The full composition of the Jules and Rimet leagues are as follows:

For each Matchday, Team Managers are required to submit their team-sheets ahead of the gameweek deadline. Two players should be nominated for the bench, and their scores won’t count; three players (two Strikers and one Goalkeeper) should be nominated for the H2Hs; and the remaining 11 players go into the Squad match. The Strikers score goals by beating the opposing team’s Goalkeeper (one goal for the win, and an extra goal for each multiple of 20 in the winning margin). Goalkeepers do not score but can keep clean sheets by matching or beating the scores of the opposing team’s Strikers. And yes, this does mean that Goalkeepers have to do twice as much work as everyone else; so make sure yours isn’t on a plane to Nice. The Squad match is much the same as last season: whoever has the highest aggregated Squad score wins, and there’s an extra goal for every multiple of 30 in the winning margin. Add that lot up, and whoever scores the most goals get three points, or one point each if it’s a draw. Simples.

If personal glory is your thing, don’t forget that there will also be fame and recognition for the top points scorers, goal scorers, and goalkeepers who excel at laundry.

Time to get down to business. The fixtures for Matchday 1, which kicks off on 13 August, are as follows:

The stand-out fixture here is Fontaine of Knowledge versus Cameroon Diaz, which offers the prospect of an early rematch between World No. 1 Jamie Pigott, and his closest challenger, Suvansh. Fabio Borges locking horns with Mark Sutherns in the King Otto’s Grecians – Team FPLLens matchup also looks tasty

Last season’s Champions, Shearer bunch of Flowers, who saw no reason to change a winning name, kick off their defence with a trip to One Tchouameni; and I predict a riot in the Fangs of Suarez – Shelby Company Limited matchup. Greyhead could be heard moaning during the draft that this is the Group of Death, but I think it’s just his innate fear of hamsters.

We’ll learn more about the teams as the season proceeds, but if you can’t wait tune into the SKLW Podcast on Wednesday evening, where Boris will be reviewing the scoring, fixtures, and leagues; and winding up Greyhead with his predictions on who will prevail. You can catch it all on Boris’ youtube channel:

Greyhead will be back from his annual sabbatical to Mount Doom in time to regale us with tales of who looked good in Matchday 1; and as always, you can get the full Monty in terms results, league tables, fixtures, and individual scores via the following link to Boris’ master spreadsheets: