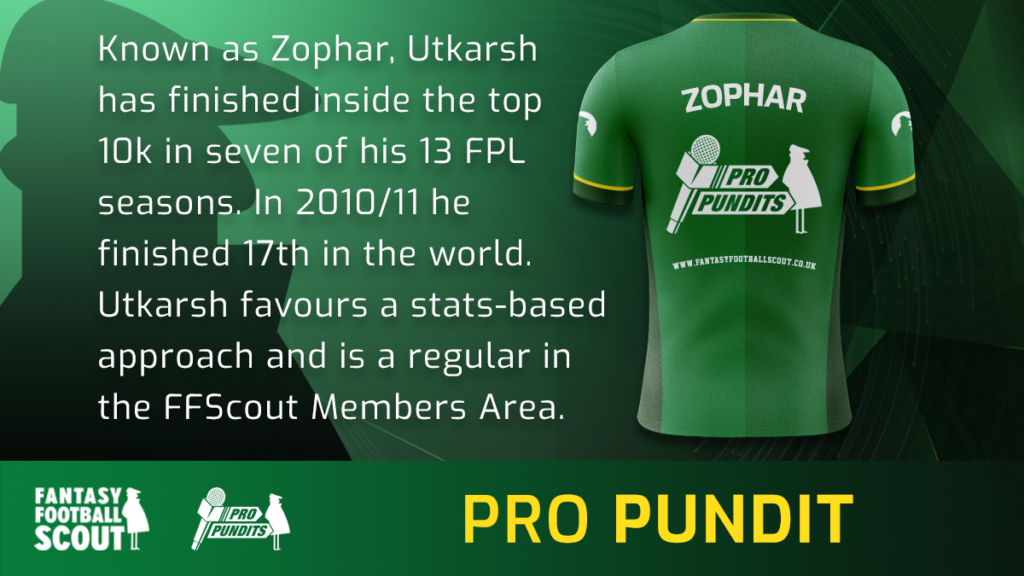 With Gameweek 2 of Fantasy Premier League (FPL) days away, we’re once again getting tips and advice from our top team of Pro Pundits, Hall of Famers and guest contributors.

Next up is seven-time top 10k finisher Zophar, who addresses some of the biggest dilemmas that FPL managers are facing ahead of Saturday’s deadline and talks through his latest Gameweek 2 plans.

With Gameweek 1 out of the way, I asked the Fantasy community to send in some questions and I have attempted to answer the most relevant ones.

Q: Is there a Manchester City midfielder you feel confident enough to bring in instead of Mason Mount (£8.0m)? Or is it better to wait a week and potentially switch to Dejan Kulusevski (£8.1m)? (@shmirofpl)

A: Lots of people started with an £8.0m midfielder, intending to switch to the standout Man City equivalent for Gameweek 2 but, based on what I saw, I wouldn’t go there. Phil Foden (£8.0m) was relatively secure for minutes last season and could be this time around but I am not sure where he will feature – left wing, right wing or at all.

The big appeal of their midfielders is their goalscoring, in addition to the assist threat, but it did look like most of the goal threat will come from their big Norwegian Erling Haaland (£11.6m), so I wouldn’t go there. I prefer the idea of moving onto Kulusevski or Bukayo Saka (£8.0m) for their excellent runs from Gameweek 3.

A: Chilwell’s start in Gameweek 1 took a lot of people – myself included – by surprise, keeping in mind Thomas Tuchel’s comments about how he needed time and he wouldn’t just throw him in. This was likely caused by Marcos Alonso (£5.5m) asking to join Barcelona and Marc Cucurella (£5.0m) having just one training session with the team.

This weekend, I expect to see Cucurella at left wing-back against Kulusevski and, with the midweek fixture congestion not too far away, I think there are better options in defence than Chilwell. Not worth the risk, in my opinion.

A: There were several questions regarding Perisic – some asking if they should sell and some asking who should make way when purchasing the Croatian international in Gameweek 3.

First off, as a Perisic owner myself, I planned to bench him for the first two outings and then bring him into the starting XI for the good run of fixtures that start from Gameweek 3. I didn’t want to commit to a transfer in defence and figured that Leon Bailey (£5.0m) could cover in the meantime.

Ryan Sessegnon (£4.5m) having a ‘worldie’ performance against Southampton was probably the worst-case scenario for that strategy. Antonio Conte’s comments can be interpreted in different ways – it could be him saying that he has faith in the XI from last season and they will start the initial games, or it’s him giving them the first match out of respect for what they achieved.

Either way, I think if you have Perisic you hold onto him and see what unfolds against Chelsea, as he is another level of player compared to Sessegnon. In a big game, Conte may still elect to start the Croatian to guard against Chelsea’s stronger right side where Reece James (£6.0m) and Cesar Azpilicueta (£5.0m) operate.

I personally think the Wolves game is a perfect time to give Perisic his first start in front of the home crowd, before a tougher away game at Nottingham Forest. The midweek fixtures come thick and fast after that, so he needs to be fully up and running by then.

The above could be wishful thinking on my part. If I didn’t own Perisic, I would certainly wait for him to get his first start before bringing him in.

Q: What do you think of the idea of switching Haaland to Harry Kane (£11.4m) for Gameweeks 3 and 4, to target Wolves and Forest (who looked very leaky)? Meanwhile, Man City have Newcastle United (a) and Crystal Palace (H), their bogey team. (@FPL_Rony)

A: This is something I did think about when the fixture list came out, as Newcastle and Palace are good defensive teams. However, after seeing Haaland destroy West Ham, I am getting cold feet. A player with high goal involvement for Man City is FPL gold and you really wouldn’t be surprised to see him get a hat-trick or a brace in either fixture.

Captaincy is a bit tricky in Gameweek 3 – Mohamed Salah (£13.0m) is away to Manchester United, Haaland is at Newcastle and Kane has the standout fixture against Wolves. Most of the Kane owners have already jumped ship to Haaland so he would be a massive differential if you do elect to go that route.

I also wasn’t too impressed by Kane against Southampton but that isn’t enough of a sample size to read into. Short answer – ask me again after Gameweek 2. I think it will still be Haaland or maybe even Salah. The Egyptian scored five goals against Man United last season and it’s the Red Devils’ next home game after the loss to Brighton and Hove Albion, so the pressure will be on them to come out and attack their visitors.

Q: Best potential replacements for Leon Bailey (£5.0m) if he blanks in Gameweek 2? Is it possible to move to another midfielder, or should we only be looking at defender spots? (@FPL_Consistency)

A: As a Bailey owner, I have been thinking about this myself. Currently, the only viable option looks to be Kiernan Dewsbury-Hall (£5.0m), who scored on Sunday, but I don’t think we can expect solid, consistent returns from a midfielder in that price bracket.

The £4.5m defenders like William Saliba and Lewis Dunk look far more appealing. So I would look to downgrade Bailey to someone like Andreas Pereira (£4.5m) or Josh Dasilva (£4.5m) and move that money elsewhere. I don’t see there being a huge difference in Pereira and Dewsbury-Hall’s scores over the longer term.

Q: Is Darwin Nunez (£9.0m) a one-hit wonder or is his form and chance involvement data sustainable? (@danfpl)

A: There were multiple questions about Nunez and, although the sample size is small, I don’t want to ignore these queries. The data we have for the Uruguayan at the time of writing is from his brief appearances in the Community Shield and against Fulham.

If we extrapolate those numbers then he is on for a record-breaking season but football doesn’t work like that. I think he’s a great option. I expect him to start against Crystal Palace and he does look like he will quickly become the focal point of that Liverpool team. If you can get him into your team without major surgery, I would do so.

What impact this has on Salah, Andrew Robertson (£7.0m), Luis Diaz (£8.0m) etc is difficult to answer after one game. We will have to wait further to draw any realistic conclusions on that.

Q: When is the earliest Gameweek you would think of using a Wildcard? (@po5tman_phat)

A: I currently plan to Wildcard over the first international break, after Gameweek 8. These plans are completely fluid though, if I see some drastic changes that need to be made to my team, I am happy to pull the trigger before then. I just want to see how managers react to the midweek fixture congestion and which players are at risk before activating the wildcard.

My initial feeling is that we will want to be rid of some of the attacking full-backs which we currently own. There is also a bit of a fixture swing in favour of teams like Leicester and Fulham, while Arsenal’s get worse.

There is generally a lot of derision and contempt amongst the FPL community about wildcarding early and I’m not in agreement with that at all. I know several people who have previously had success with a Wildcard as early as Gameweek 2, so if you feel the need to pull the trigger, do it.

There will always be those who will point to it as a sign of supposed failure but if you see an opportunity there, go for it. Not correcting a mistake is the bigger error, you can’t afford to be stubborn in this game.

READ MORE: When are the best FPL Gameweeks to play the first Wildcard?

MY TEAM FOR GAMEWEEK 2

We discussed some of the questions above in more detail, as well as several other topics, on this week’s episode of The FPL Wire. You can check it out here.

See you next week!