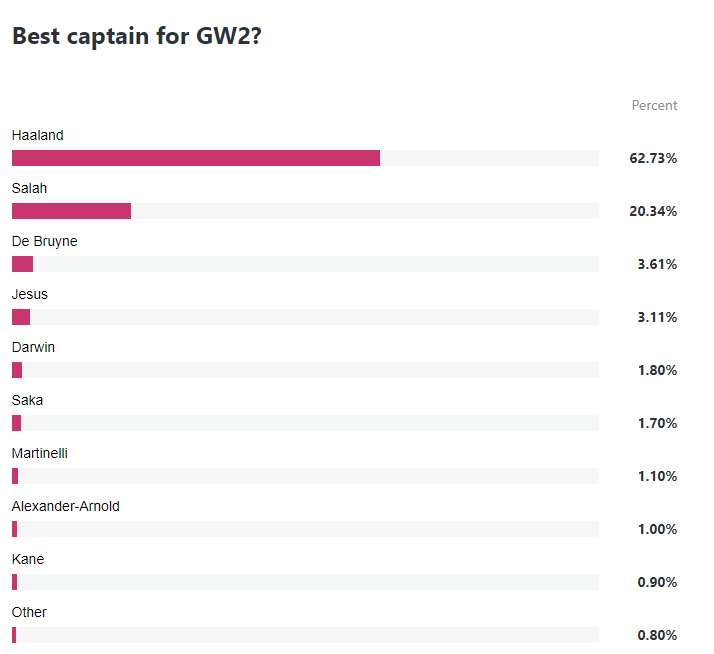 Fantasy Premier League (FPL) managers are looking to Manchester City and Liverpool for the Gameweek 2 captaincy, and as per usual, the Captain Sensible article is here to highlight which assets have the best chance of hauling.

First, we will assess the fallout of the Gameweek 2 captain poll, before then analysing the best options, Rate My Team (RMT) and the Premier Fantasy Tools ratings ahead of Saturday’s 11:00 BST deadline.

Erling Haaland (£11.6m) is the runaway leader of the captain poll in Gameweek 2, with just under 63% of total votes from our users at the time of writing.

Just over one in five poll responders are going with the tried-and-trusted Mohamed Salah (£13.0m), meanwhile.

There was little sentiment on Sunday as FPL managers led a predictable transfer exodus from Harry Kane (£11.4m), given Haaland’s exploits and their respective Gameweek 2 fixtures.

The Norwegian dissipated any doubt amongst critics that an adjustment period was required at Manchester City following his expertly taken double.

Haaland converted a spot-kick, after drawing the penalty, and delivered the decisive counter-punch after Kevin De Bruyne’s defence-splitting through ball.

“The way he took the ball to take the penalty, I said, ‘oh, I like it’. I think if someone were to take this ball, he would have punched his team-mates in the face. I’m pretty sure of that, and that is a good sign.” – Pep Guardiola on Erling Haaland’s penalty

In terms of underlying data, the former Borussia Dortmund striker produced big numbers in Gameweek 1, ranking best in the division for shots inside the box (five) and big chances (four).

Haaland’s production had an air of inevitability following his promising Community Shield performance against Liverpool, which produced three shots in the box and two big chances.

While Pep Guardiola’s Manchester City ranked best in the division last season for minutes per expected goals (xG), there is evidence of a tactical adjustment to funnel big chances through their Nordic marksman.

Guardiola has implemented an inverted full-back system with Kyle Walker (£5.0m) and Joao Cancelo (£7.0m) playing as auxiliary centre midfielders in a 2-3-5 formation.

In possession, this system allows Manchester City to attack with five supporting players operating with a specific modus operandi – to provide for Erling Haaland.

Above: Average positions for Manchester City against West Ham United in Gameweek 1

De Bruyne has carried his creative form into this season, creating a combined seven chances and two big chances against Liverpool and West Ham United in domestic action thus far.

Above: Touch heatmap for Kevin De Bruyne against West Ham United in Gameweek 1

Owned by just 3% of top 10k managers, Kevin De Bruyne represents both a hot differential and an explosive option, highlighted by his four-goal haul against Wolves last season.

Manchester City has arguably the best fixture in Gameweek 2 against newly-promoted Bournemouth with this author expecting a Citizens goal-fest.

Furthermore, the Cherries were proponents of an intense press, ranking first in EFL Championship for pressure on opposition players in possession.

However, the Premier League is an altogether different beast and despite an opening-day clean sheet against Aston Villa, red flags were evident.

Against Bournemouth, the Villains ranked joint-fourth in Gameweek 1 for goal attempts (15) although struggled to break down the Cherries with just four attempts inside the box and two shots on target.

In terms of playstyle, Bournemouth recorded the deepest defensive line in Gameweek 1 and Manchester City should possess sufficient quality to dismantle the Cherries’ low block.

Notably, Scott Parker issued a stark warning that Bournemouth lacked the quality and depth to compete at this level in saying, “we’re way short of where we need to be”.