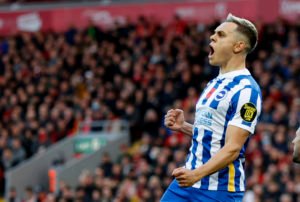 Gameweek 2 of Fantasy Premier League (FPL) is fast approaching, which gives us an opportunity to have a look at some more differential options.

This time, we’ve selected low-owned picks at Brighton and Hove Albion, Nottingham Forest and Leeds United, who we think have the potential to make an impact.

Leandro Trossard (£6.5m) has featured as a winger, wide midfielder, number 10 and false nine under Graham Potter in the past 12 months, but has been lining up as a wing-back of late.

That kind of ‘reverse out-of-position’ tag isn’t usually one welcomed by Fantasy managers, but it does seem to be getting the best out of the 27-year-old: the Belgian international delivered seven attacking returns (four goals, three assists) in his final six appearances last season and netted a hat-trick in the recent friendly win over Espanyol.

It’s also worth noting that his actual position on the pitch is extremely high. For example, in last weekend’s 2-1 victory at Manchester United, only Danny Welbeck (£6.5m) and Pascal Gross (£5.5m) took up a more advanced average position. In that match, Trossard was also heavily involved in both goals and almost scored himself within 60 seconds after pressing Diogo Dalot (£4.5m).

Brighton and Hove Albion are now about to embark on a very kind run of fixtures, as they face only one of last season’s top 10 in their next seven matches. Notably, that also includes appealing games against newly-promoted Fulham and Bournemouth.

Graham Potter likes his players to be versatile and Trossard certainly fits the bill. Now, given his schedule, he could be a nice differential pickup in the mid-price midfielder bracket.

As a result, he was named the Championship’s young player of the year, with his partnership with Djed Spence (£4.5m) down the right flank one of his team’s biggest attacking weapons.

Now, Johnson will hope to replicate that understanding with Neco Williams (£4.0m), as Forest return to the City Ground against West Ham United in Gameweek 2.

At Newcastle United last weekend, Forest struggled for large periods but did look better after bringing Taiwo Awoniyi (£6.0m) on for Sam Surridge (£5.0m), a switch which meant Johnson wasn’t so isolated in the final third. Indeed, they enjoyed their best spell of possession shortly after.

Steve Cooper named six new players in his starting XI in Gameweek 1, including Jesse Lingard (£6.0m), and the hope is now that with an additional week of training, they can improve against a West Ham side who only had one fit centre-back against Manchester City.

On penalties and heavily involved in set-pieces last season, the next challenge for Brennan Johnson is to establish himself as a goalscoring forward in the top-flight, something his counter-attacking attributes and finishing ability should enable him to do.

Jack Harrison (£6.0m) performed well in the opening day win over Wolverhampton Wanderers and could be one to step up in the absence of Raphinha.

The winger played the full 90 minutes as Leeds United came from behind to beat Bruno Lage’s side, as he supplied an assist and posted team-leading totals for created chances (six), big chances created (two), successful crosses (four), final-third touches (31) and take ons (four).

Notably, he also took on a share of set-pieces with team-mate Brenden Aaronson (£5.5m), another appealing differential to emerge from Gameweek 1.

However, Harrison’s form has been good for a while now. In fact, from Gameweek 28 onwards in 2021/22 – Jesse Marsch’s first match in charge – he managed four goals and was unfortunate not to provide an assist, given his -1.24 expected assist (xA) delta.

Leeds now take on a Southampton side looking to respond to a 4-1 thrashing at Tottenham Hotspur, but the pressure is on, given that they struggled at home towards the back end of last season, losing five of their last six St Mary’s clashes whilst conceding 14 goals. Other appealing fixtures against Everton, Brentford and Nottingham Forest follow prior to Gameweek 8, and as a result, it’s no surprise they sit fourth on our Season Ticker in that period.

Jack Harrison sits in just 1.2 per cent of squads at the time of writing and is a tempting differential given Leeds’ schedule.