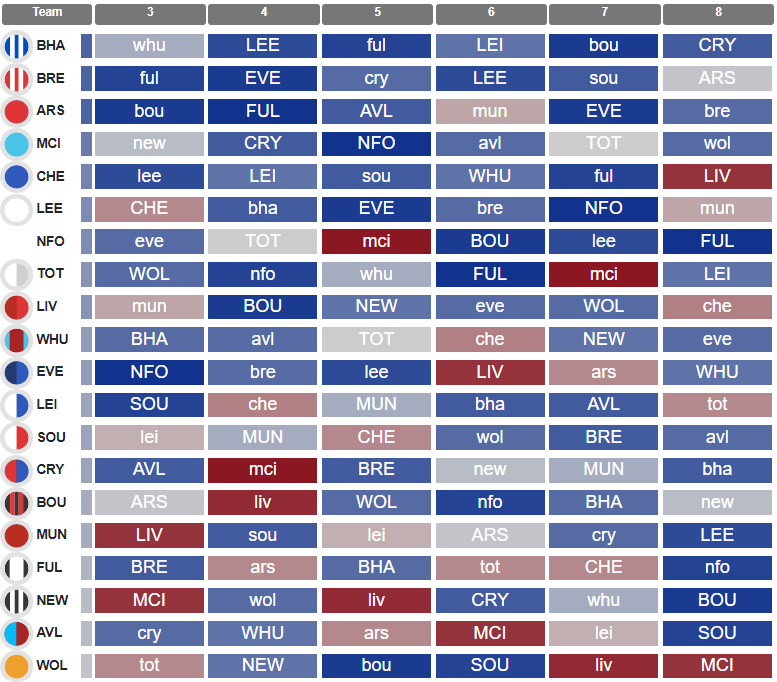 Our regular frisk of the fixtures sees us assess the Fantasy Premier League (FPL) clubs and players with – in theory – the strongest run of six league matches starting from Gameweek 3.

Our colour-coded Season Ticker is the primary source for this piece; using this tool as a Premium Member, you can sort by difficulty, rank by attacking and defensive potential or find budget rotation pairings. You can even set your own difficulty ratings, should you disagree with our own.

You can see a tutorial on the Season Ticker below:

The run of fixtures from Gameweeks 4 to 7 seems as good as it gets in FPL, with the added bonus that the Seagulls beat West Ham United just three months ago on the final day of 2021/22.

Pascal Gross (£5.6m) is arguably the leading Brighton asset right now. Previously a rotation risk, Gross scored twice in Gameweek 1 and has the league’s third-highest expected goal involvement (xGI) total of 2.07. The low-priced German, playing in an advanced role for the Seagulls, is on all set pieces and could also be on penalties now that Neal Maupay (£6.5m) looks set to leave.

Saturday also brought David Raya‘s (£4.5m) first clean sheet of the campaign, overshadowed by the 35-minute blitz that put the Bees 4-0 up over Manchester United.

Josh Dasilva (£4.6m) scored the first goal, adding to his opening day strike at Leicester, and he’s set to double-rise this week. However, these have been his only two shots and he has played just 92 of the 180 minutes so far this season. Once new signing Mikkel Damsgaard (£5.5m) is up to speed, Dasilva’s place would have to be in some question.

On one more point is Mathias Jensen (£5.0m), whilst Ivan Toney (£7.1m) leads the way with 17. He will relish the prospect of facing Fulham, plus the three worst defences of last season’s survivors – Everton, Leeds United and Southampton.

For those that can’t quite afford Toney, fellow forward Bryan Mbeumo (£6.0m) could be an appealing alternative.

The Gunners’ assets are already hugely popular. The 19-point Gameweek 2 haul of Gabriel Jesus (£8.1m) has taken him beyond 76% ownership, with midfielder Gabriel Martinelli (£6.3m) enjoying a third price rise.

Consecutive games against newly-promoted Bournemouth and Fulham hold huge appeal and could tempt some into captaining Jesus. However, it should be noted that both sides have already kept a clean sheet during the opening two rounds.

Chelsea’s fixtures look appetising from now until the international break, particularly from an attacking perspective.

Their next four opponents were among the teams who kept the fewest Premier League clean sheets in 2021/22, with not one of them registering more than eight shut-outs.

Those defensive deficiencies have carried over into the current campaign and they don’t have a clean sheet between them in the opening two Gameweeks.

Fulham, despite their goalless draw at Wolves last weekend, aren’t renowned for their defensive fortitude either.

The Gameweek 8 visit of Liverpool is the obvious deterrent but the Reds have looked far from secure at the back so far, so it remains to be seen whether they are back in the groove come mid-September when current absentees are back from injury.

With many managers already doubling or tripling up on Manchester City (new, CRY, NFO, avl, TOT, wol) and Liverpool (mun, BOU, NEW, eve, WOL, che) assets, we won’t waste too much time trying to justify their inclusion because of the upcoming schedule.

Not only are these sides arguably fixture-proof year after year (we say ‘arguably’ due to the Reds’ indifferent start to 2022/23) but their immediate games also look particularly superb and a slightly lower positioning on our Season Ticker is only because of opponents later on in the six-week range.

Indeed, when the ticker is ranked by ‘relative difficulty’, City and Liverpool are the top two teams.

Tottenham Hotspur (WOL, nfo, whu, FUL, mci, LEI) also have four decent fixtures before they make a trip to the Etihad in Gameweek 7.

A Wolves side trialling a more attacking back-four formation, a West Ham outfit short of centre-halves and two newly promoted clubs make up the short-term schedule, which will give owners of Harry Kane (£11.4m) and co plenty of encouragement.

Things haven’t yet gone to plan for Pedro Neto (£5.5m) and his many owners, with the Portuguese having blanked against both Leeds and Fulham.

He assisted the assister in Gameweek 1, then found himself unable to capitalise on a defensive mix-up that left an open goal last weekend. The 22-year-old does look a threat but is about to enter a six-match run that includes Manchester City, Liverpool and Spurs.

Clashes with Bournemouth and Southampton are sandwiched by those trickier fixtures, at least, so if FPL managers have the luxury of benching Neto against Spurs then he could feasibly be a ‘hold’ until Gameweek 7.

Having failed to keep out Bournemouth on the opening day, Aston Villa were on the verge of preventing Everton on Saturday. That is until Lucas Digne (£5.0m) put the ball into his own net to rob both him and Matty Cash (£4.9m) of points.

Two of this week’s most-sold players are Philippe Coutinho (£6.9m) and Leon Bailey (£4.9m), as the latter was dropped to the bench by Steven Gerrard.

The only two sides yet to concede a goal in 2022/23 meet at St James’ Park on Sunday, with the Magpies soon visiting Anfield too.

The likes of Kieran Trippier (£5.0m) may have to be benched in two of the next three fixtures, then, or else cashed in for a similarly priced option.

No side had more goal attempts than the Magpies in Gameweek 1 but only Bournemouth produced fewer in Gameweek 2. It might be a decent time to switch Callum Wilson (£7.5m) to Toney or Welbeck, with Crystal Palace also one of the meanest backlines of last season.