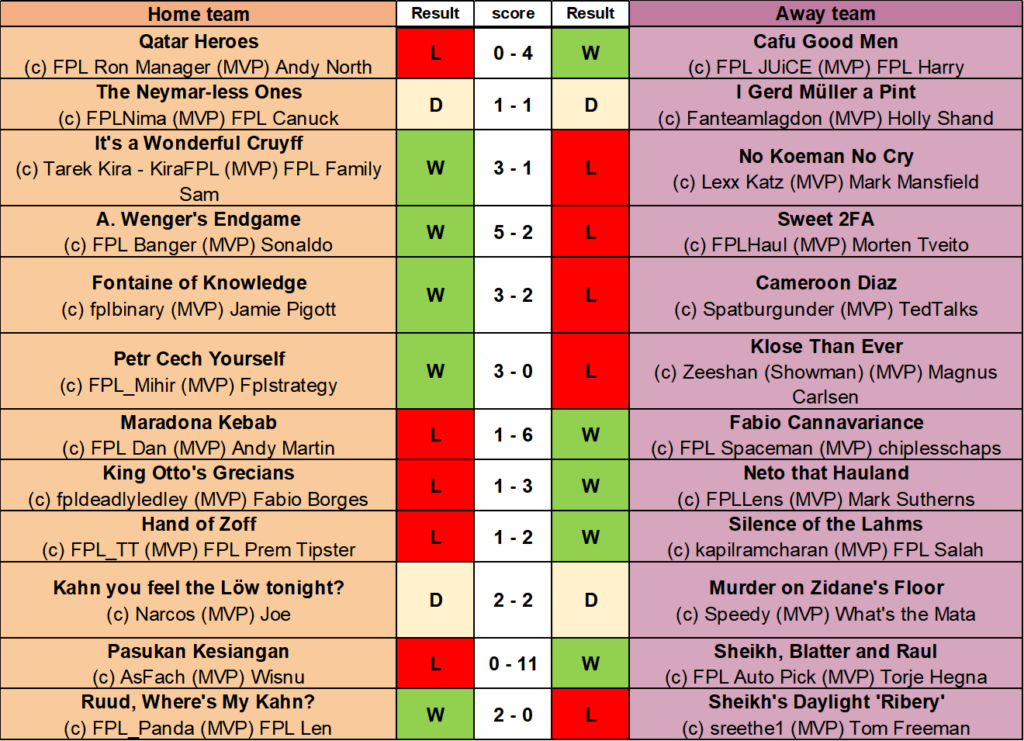 The fat man is singing so it must mean the new season of the Striker Keepers Losers Weepers Community Tournament has started!

As previously mentioned, we have World Cup Fever this time round and the teams were like Pele after a couple of his special blue pills, up for it, and unlike Diana Ross at the opening ceremony of the 1994 World Cup some of them at least hit the target when it came to goals.

WHAT’S IN A NAME?

Before we jump into the main course of the review of Matchday 1 let me pause to mention the confectionery aperitif that was the best name competition. It was put to the people via Twitter poll and after a few verbal jabs about the validity of names, it came down to three teams to contest the final.

They were Petr Cech Yourself led by FPL Mihir, No Koeman No Cry headed by Lexx Katz and One Tchouameni captained by FPL Transfer Tips. A one of kind Chocolate bar commissioned by the Tournament Committee was the prize and it was Mihir who won the confectionery challenge. Well done!

Let’s look at the highlights from the opening weekend.

Remember there are two leagues this year with a prize for the top teams after the end of 23 weeks of competition. There will then be a Smackdown Showdown two-legged encounter between the two league winners to decide this year’s ultimate league champions.

Following the league competition, we will then move into a knockout cup stage, with the top 8 teams in each league competing in the Champions League, the middle 8 teams in the You’re Ropey League Cup and the bottom 8 will fight to avoid winning the wooden spoon.

Last year’s league champions Sheikh, Blatter and Raul sent a message to all of their rivals with an 11-0 thumping of Pasukan Kesiangan, not even Sigurd’s singing was out of tune, as he was one of the top scorers, plus their strike force of Raish and Peter Heine Nielsen linked up in perfect harmony with a goal apiece.

They stole the headlines from their analytical rivals Fabio Cannavariance, headed up by FPL Spaceman who’s 6-1 victory over the Maradona’s Kebab would normally have been the big story.

FPL Rubber Ducky scored a quacking goal for the Kebabs, but it was not enough as FF Trout swam away with an equalizer before the rest of the squad proved to be optimal in their performance. FPL Dan must be regretting his decision to bench DreadFPL’s 84 points.

FPL Juice’s Cafu Good Men had set themselves low expectations going into the competition, but their opponents Qatar Heroes couldn’t handle the truth as Zrinkec, Hillard Harriers FC scored, and they ended up with a 4-0 win.

The rookie managers had a strong start in the Rimet League with Pjanic at the Disco, Nusantara Gauchos and One Tchouameni all winning their opening games against some of the more experienced team captains.

The biggest shock was FPL Transfer Tips and his One Tchouameni whipping up a storm by defeating last year’s Champions League Winners, Shearer’s bunch of Flowers. FPL National scored one against the Florist’s MVP Luke Williams before the rest of team added three more to see Danelius and co deflowered.

Unbelievable Geoff were left open mouthed as Nusantara Gauchos handed out a 4-0 thrashing inspired by a score of 93 by renalda and goals from almnkbwie, Newbie_FPL, all this plus their team captain Luthfi Aditia could afford to bench his own impressive score of 84.

It would be remiss of me not to mention Gentleman’s Grealish impressive 3-0 victory over Az and Zlatan Ibra-hamster-vic, FPL Noble Gent led from the front with a goal and FPL Focal kept his sheet very clean.

PLAYERS OF THE WEEK

The standout performance comes from Sanket Dessai with his man of the match score of 94pts as the Hurrikanes blew past Darth_Krid’s Baggio Trousers.

Plenty of good goalkeeping performances over the first Matchday, although Frenchy FPL’s 85 points and two saves stood out as it earnt his Klinsmann Secret Service a narrow victory, no spies on him.

Here are the opening weekend tables but nothing to get concerned about just yet:-

Neto that Hauland against Petr Cech Yourself sees FPL Lens face off against his former teammates led by FPL Mihir, both come into this with an opening weekend win so this should be a cracker.

Two other teams with 100% records are Fabio Cannavariance and FPL Binary’s Fontaine of Knowledge who also clash in Matchday 2 so something has to give.

One game dominates the fixtures this coming weekend, if you allow me to be self-indulgent, and let’s face it I am writing this update so I will be, as Britney’s Qatar Pounder with Greaves led by Chaballer, with yours truly amongst his ranks take on Toby, Boris and those pesky Hamsters.

This time they are known as Zlatan Hamster-vic but make no mistake they are the same rodents that bested us last year (although we still won a trophy, so 1-0 to us) but revenge is on our mind.

Elsewhere, there are other games to watch out as its first versus third as One Tchouameni take on Nusantara Gauchos, the champs Shearer’s bunch of Flowers will want to go back to winning ways against Pjanic at the Disco, plus the Klinsmann Secret Service will hope to have a license to thrill against Pirlo’s Pen and his shell-shocked squad.

So, plenty to look forward to after a hectic opening weekend, if you want to delve deeper into all the results then check out the spreadsheet:-

There is also a live YouTube weekly show with me, Boris, FPL Maldini, Darth_Krid plus anyone else who turns up so tune into that for in-depth discussion on the week that was, but for now I bid you fond farewell wishing you nothing but green arrows (apart from the Hamsters obviously).