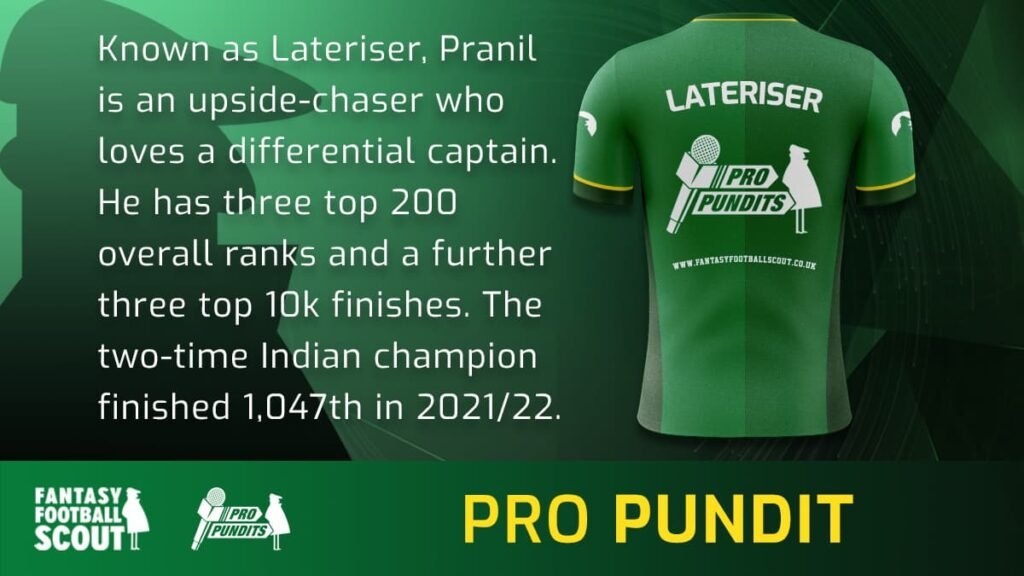 With the 2022/23 Fantasy Premier League (FPL) season underway, we’re welcoming back our stellar team of Pro Pundits, Hall of Famers and guest contributors.

Next up is two-time Indian FPL champion Lateriser, who shares his thoughts ahead of Gameweek 3.

Gameweek 3 is here and I thought it would be a good time to take some questions from the community with regards to the same.

Q) Are we sleeping on Brighton and Hove Albion? Their defence continues to be very good – both in numbers and on the eye. But their attacking numbers are increasing quite impressively. It feels like the picks from the top six clubs have us ignoring Brighton, who look great yet again. And their fixtures are good. (@FPL_Dino)

Hi Dino. Thank you so much for your question. Funnily enough, I am also curious about Brighton and you are right. Their fixtures look great right until Gameweek 8.

While we know all about Brighton’s credentials from a defensive point of view, looking at those fixtures has me wondering whether there are any options in their attack as well.

Firstly, I just want to say that Robert Sanchez (£4.5m) is a great goalkeeper option, given the fixtures until your first Wildcard. If you have no other fires in your team and are sitting on double Leicester City stoppers, I’d consider making the switch.

Even when looking at their defence, I don’t mind plumping for one of their £4.5m defenders if you are looking to shift funds elsewhere. Lewis Dunk is still my favourite of these given his set-piece threat, especially now that Shane Duffy (£4.5m) has left for Fulham.

Now let’s talk about their attack.

In this excellent image provided by FPLGromit, we see a huge spike in Brighton’s expected goals (xG) figures during the second half of the season, a period where they ranked seventh-best. They are also in the top five for this campaign’s opening two weeks.

Curious to discover who was dominating the xG in those final weeks, when they made a shift in personnel, I see that the answer is Danny Welbeck (£6.5m).

Towards the end of last season, Welbeck was second only to Son Heung-min (£12.0m) for xG non-penalty amongst all attackers. He has now had seven consecutive 90-minute appearances. With Welbeck, there is always the perception of ‘glass legs’ but I think head coach Graham Potter has handled his injury issues well and he looks very fit and sharp at the moment.

Let’s compare him to teammates both for the end of last season and the start of this one.

Towards the end of last season, Welbeck’s non-penalty xGI (expected goal involvement) was leading amongst his teammates and he’s only currently behind Pascal Gross (£5.6m) right now. Both Gross and Welbeck are intriguing options to me and I don’t mind a punt on either of them at all until Gameweek 8, which looks like the time I’ll likely be using a Wildcard.

Q) With such pricing in FPL where you can afford the entire 11 from the top six sides, can we rotate the big hitters to get the best captaincy options?

Last week if someone sold Mohamed Salah to Kevin De Bruyne, they can jump to Son this week and then back to Salah. You have successfully done this in the past. (@FPL_InHindsight)

I do think that rotating big hitters might work this season but it is too early to judge such trends. We need to see a few more Gameweeks to assess this but a few things I would recommend if you want to implement this practice are:

Q) If you are buying, would you prefer Marc Cucurella or a second Manchester City defender? (@FplRichard)

As things stand, probably Marc Cucurella (£5.0m). I was originally very sceptical of Chelsea’s defence but, having seen who they have recruited, I am very comfortable with a double-up on their backline. Both options have good fixtures for a while but Cucurella has slightly more upside in my opinion because he’s either going to play left wing-back or left centre-back.

Assuming you own Reece James (£6.1m) and Joao Cancelo (£7.1m), I think he beats the other Man City defenders for attacking threat and bonus points potential. Add the fact that he took some set pieces adds more appeal, in my opinion.

That is it from me, until next time. Hope you have a good Gameweek 3.