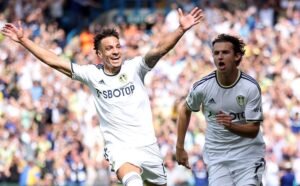 Having already brought you the statistical summary of Sunday’s Gameweek 3 action, we now turn our attention to the wider Fantasy Premier League (FPL) talking points from the day’s fixtures.

The numbers in this article are from our Premium Members Area, where you can access Opta player and team data for every single Premier League fixture.

Leeds United continued their unbeaten start to the season as they earned a convincing 3-0 victory over Chelsea at Elland Road.

Brenden Aaronson (£5.5m), Rodrigo Moreno (£6.2m) and Jack Harrison (£6.0m) were all on the scoresheet, with the latter two also adding assists and bonus.

Notably, the second most-brought player for Gameweek 3, Rodrigo, has now produced back-to-back double-digit hauls and as a result, is up to 35 FPL points, at least 10 more than any other player.

Harrison, meanwhile, has also produced at least one attacking return in each Gameweek, and only trails Kevin De Bruyne (£12.1m) for chances created (11) after three rounds.

Away from their attacking qualities, the Whites’ defensive organisation stood out, with their work rate in and out of possession excellent. Indeed, Aaronson, who opened the scoring when he pressurised Edouard Mendy (£5.0m) into an error, was relentless and always buzzing around to help Leeds drive forward.

“The kid is non-stop. He is relentless. I knew that about him when I had him in Salzburg. He is also very intelligent and can adapt quickly. That is what you have seen. He has got better from week one to week two to week three. If he continues on this pace he has potential to really grow. That is across the whole group. It is about feeding them positive information and reinforcement and getting them to commit in every way possible. You see the work ethic. We never get out-run, we never get out-worked. I am trying to build so we don’t also get out-thought.” – Jesse Marsch on Brenden Aaronson

Leeds lost all 12 matches last season against teams who finished in the top six, conceding a whopping 47 goals, but have allowed just three big chances so far this season – only Brighton and Hove Albion and Tottenham Hotspur have given up fewer.

“We had to adjust because they started with a build-up of three. We thought they would maybe be in a four like against Tottenham. We did adjust and built that into the match plan. We had to be variable with our build-up and some of the things we were trying to do. The response to some adjustments during the game and at half-time was really good. Guys off the bench came in and gave really good performances. These games require best performances possible and we got that from individuals and the team.” – Jesse Marsch

As for Chelsea, they sunk without a trace at Elland Road, with problems all over the pitch.

In the absence of the injured N’Golo Kante (£5.0m), Thomas Tuchel unsuccessfully turned to Conor Gallagher (£5.8m) in midfield, while Reece James (£6.1m) was once again deployed as a right-sided centre-halve, much to his FPL owner’s frustration.

However, for the second week running, a second-half tactical switch saw him revert to a wider role, where he looked more comfortable as a right-back in a 4-3-3 set-up. Marc Cucurella (£5.1m), meanwhile, was presented with a couple of decent opportunities but failed to hit the target.

Having conceded five goals in their last two outings, Chelsea’s woes were then compounded late on when Kalidou Koulibaly (£5.6m) was sent off for a second bookable offence, meaning he’ll miss the visit of Leicester City in Gameweek 4.

“Everything that can go wrong, did go wrong. It started yesterday. We had no plane to arrive so we came on the bus. The players could fly but for the coaching staff it was a long ride on the bus. It continued today. We lost the game in the first 20 minutes, where we were clearly better and had huge chances. A lot of touches in the box but we miss the target and do not take what we deserve. We then stopped doing what we were doing good and it was even for 15 minutes and in those we gave two presents.

We were clearly the better team. They do what they do. I don’t see that a set-piece and own goal (Mendy’s mistake) are due to the style. They are mistakes. If we give goals away like this that are totally unnecessary and when we are totally in charge we cannot win football matches. We tried second-half and I am disappointed we lost that half as well. They made the maximum of their half-chances and we did not.” – Thomas Tuchel

With just five Premier League wins in their last 13 outings extending back to last season, Chelsea are in a bit of a slump, although they do at least have a decent run of fixtures coming up.

Newcastle United and Manchester City played out a breathtaking 3-3 draw at St James’ Park on Sunday, with Erling Haaland (£11.7m) and Bernardo Silva (£6.8m) pulling the visitors back from 3-1 down.

The Norwegian was relatively quiet in the first-half, but came to life after the break, as he scored and hit the post from three big chances.

However, Pep Guardiola spoke after the match about rotating his squad once City start playing twice a week, namechecking Haaland specifically.

“What is important is he doesn’t have niggles. Last season he didn’t play 90 minutes because he was injured. The physios and doctors did an incredible job since he arrived to avoid injuries. Now he has one game a week. I tell you now when we have games every three days that Erling will not play, I will play Julian (Alvarez). One of my favourite players is Bernardo and he did not play until today. Riyad (Mahrez) is by far one of my favourite players – especially on the biggest stages – and today he didn’t play. When we start with games every three days, everyone is going to play.” – Pep Guardiola on Erling Haaland and rotation

City had looked comfortable in the opening stages but struggled to cope with Eddie Howe’s side after an injury to Nathan Ake (£5.0m), with his replacement Ruben Dias (£6.0m) and John Stones (£5.4m) uncharacteristically poor.

Guardiola offered an update on the Dutch centre-back after full-time, whilst confirming he won’t feature in City’s midweek friendly in Barcelona.

“I think it’s his groin. Absolutely not.” – Pep Guardiola on Nathan Ake

Whilst City enjoyed most of the possession (69 per cent), they struggled to control the hosts, with the impressive Allan Saint-Maximin (£6.4m) causing problems throughout as he registered a trio of assists.

“They (Newcastle) have everything, pace and quality. St James’ Park is a difficult place to come, we behaved really really good again, but the only problem is that when we break the lines and run… if you finish the action (attack) it’s no problem, but if you don’t finish you don’t arrive to control Saint-Maximin and Almiron. We should spend more time in the final third, give more passes in that moment but it’s difficult. If Erling (Haaland) is going, Phil (Foden) has that aggression to get there. If it’s Jack Grealish and Riyad Mahrez they are more calm and help us to come together, and if we lose the ball we are there and they (the opposition) cannot run (counter-attack).” – Pep Guardiola

Jack Grealish (£7.0m), meanwhile, was missing from the matchday squad after suffering a knock against Bournemouth.

“He (Grealish) had an incredible blow in the last game against Bournemouth in the last minutes. We’re lucky it was just a little, little, little damage to his ligament, but not much. He feels better, but not ready for today.” – Pep Guardiola on Jack Grealish

As for Newcastle, they made life difficult for City, as they created plenty of opportunities and took the game to the champions.

Miguel Almiron (£5.0m), Callum Wilson (£7.4m) and Kieran Trippier (£5.0m) were all on the scoresheet, with the latter now ranked joint-second in the overall defender standings with 20 FPL points. He’ll also be available next week after his red card was overturned following a VAR check.

“We wanted to go toe-to-toe with them and I thought we did that throughout the match. Manchester City are a top side and they have the quality to get themselves back in the game but it shows just how far we have come since January. The lads are disappointed after being 3-1 up, but we have to take the positives. I always fancy myself on free-kicks and I’m delighted I could help the team take that extra step and lead the game.” – Kieran Trippier

West Ham United are still yet to score in the Premier League this season, as their run of defeats continued on Sunday against Brighton and Hove Albion.

Across their opening three matches, the Hammers have created just one big chance from open-play, with only eight of their 38 efforts hitting the target.

In an attempt to get more from his attack, David Moyes introduced new-signing Gianluca Scamacca (£7.0m) just after the hour mark, a move which saw Michail Antonio (£7.4m) move to the left-flank.

However, it failed to have the desired effect, with Antonio’s poor run of goalscoring form continuing: the Jamaican has managed only six goals in his last 36 games.

“We’ve been struggling a bit for goals and if it wasn’t for Jarrod Bowen in the second half of last season, we will have been short.” – David Moyes

“I’m disappointed because we didn’t win. We did okay but we gave away a couple of really poor goals. The penalty was the turning point, we started okay and contained them a little bit but we lacked that bit of quality and we didn’t keep the ball when we won it. We hadn’t done badly up till then. The same situation happened in the second half as well. We got ourselves back in the game and looked threatening but the second goal was a killer and we were punished. Brighton are a good team. I did think we had done better in some parts today against them that we had in the past but it doesn’t show in the result.” – David Moyes

On the injury front, Vladimir Coufal (£4.5m) was helped off by medical staff with what looked like a concussion sub.

As for the visitors, Graham Potter’s team have now taken seven points from their first three games and sit fifth in the table, level on points with second-placed Man City.

The second goal arrived after Trossard was pushed further forward following the introduction of new signing Pervis Estupinan (£4.5m), who has just joined from Villarreal, which is one to monitor in the coming matches.

It’s also worth flagging Brighton’s excellent away form – since the start of last season, only Man City, Liverpool and Chelsea have earned more away points than Graham Potter’s side, which is encouraging with trips to newly-promoted Fulham and Bournemouth on the horizon.

“There is always a different role you have to play away from home but the results have been better away so far.” – Graham Potter