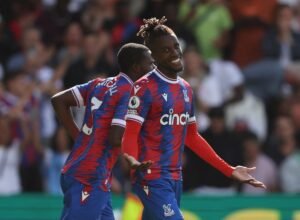 We wrap up our coverage of the weekend’s Fantasy Premier League (FPL) action and start looking ahead to Gameweek 4 in The Digest.

Wilfried Zaha has started the season in fine form, netting in the 1-1 draw with Liverpool at Anfield before scoring twice against Aston Villa on Saturday.

Notably, he has now scored in each of Crystal Palace’s last seven Premier League victories, underlining his talisman status.

Averaging seven points per match across the opening three rounds, Zaha has produced some eye-catching underlying statistics. Indeed, his five big chances can’t be beaten by any midfielder, nor can his 2.70 expected goal involvement (xGI).

Those numbers need context – the action which saw him miss a penalty and convert the rebound in Gameweek 3 accounted for 1.41 of that total – but nonetheless, Zaha is playing well and looks dangerous in the final third.

“He has this fire inside of him that allowed him to get into the game and score goals. He’s an important player for us and if he keeps playing like he did today in and out of possession, we will be stronger as a team.” – Patrick Vieira on Wilfried Zaha

Midway through last season, Palace manager Patrick Vieira challenged Zaha to play closer to goal and find the net more often. And it seems to be working: he has now scored 12 Premier League goals in 2022 with only Tottenham Hotspur duo Son Heung-min (£11.9m) and Harry Kane (£11.4m) scoring more in the competition this calendar year.

Zaha can sometimes be a frustrating own. He is easily riled and occasionally goes missing, but he does feel like a midfielder with significant potential once Palace’s trip to Manchester City is out of the way in Gameweek 4.

Known for his chopping and changing of personnel and systems, Graham Potter has now surprisingly named the same starting XI for three Premier League games in succession.

And it’s that role that has allowed Gross to thrive, with two goals and an assist to his name already this season.

However, having a settled Brighton starting XI/system was almost too good to be true for FPL managers, and it wasn’t long before Potter decided to shake things up in Gameweek 3.

Following new signing Pervis Estupinan’s (£4.5m) introduction after 63 minutes, suddenly, the Seagulls were operating in a back four with Trossard shifted further forward into Adam Lallana’s (£5.0m) role, from where he scored the second goal at the London Stadium.

“I thought we were suffering a little bit when they put Scamacca on — he’s a big target as well, so they were probably going to go long. Dunky (Lewis Dunk) and Webby (Adam Webster) could then work as a more conventional two centre-backs and Pervis (Estupinan) plays left-back. Maybe that helped. We scored pretty much straight afterwards. It makes you think that way in your brain, but until I watch it back I can’t confirm it!” – Graham Potter

“It was the need to go to a four, I thought he could help us there. He’s a full international, has played in the semi-finals of the Champions League. He can play football.” – Graham Potter on Pervis Estupinan

The performances and results have been very good for Brighton and Hove Albion so far this season, so there seems little reason to move away from the 3-4-2-1 formation.

However, Potter now has an orthodox left-back to call upon, and his tactical adjustments will need to be monitored closely in the coming weeks, as it could impact the potential of their FPL assets.

Under Eddie Howe, Newcastle United have gone from relegation contenders to one of the Premier League’s best sides, highlighted by their ability to go toe-to-toe with Manchester City in Gameweek 3.

It was an excellent all-round display by the Magpies, but far from a one-off performance.

Indeed, only Liverpool, champions Man City and Tottenham Hotspur have collected more Premier League points than Newcastle since the turn of the year, with their only home defeat arriving at the hands of Jurgen Klopp’s side.

That suggests their assets should be on our Watchlists from Gameweek 6, when their following five fixtures see them sit top of our Season Ticker for fixture difficulty.

Nick Pope (£5.0m) has put in some inspired performances in goal so far, with only Dean Henderson (£4.5m) and David Raya (£4.5m) making more saves than the former Burnley man.

Kieran Trippier (£5.1m), meanwhile, is only behind Trent Alexander-Arnold (£7.5m) and Reece James (£6.1m) for crosses, with set pieces boosting his appeal.

A spell on the sidelines would perhaps benefit Chris Wood (£5.9m), but it’s surely Allan Saint-Maximin (£6.4m) who carries the most potential, fresh from his trio of assists in Gameweek 3, when he was almost unplayable from the left wing.

“He’s OK. Normal process. He’s gone for a scan. We’re waiting on those results. We hope it’s not too serious.” – Eddie Howe on Callum Wilson