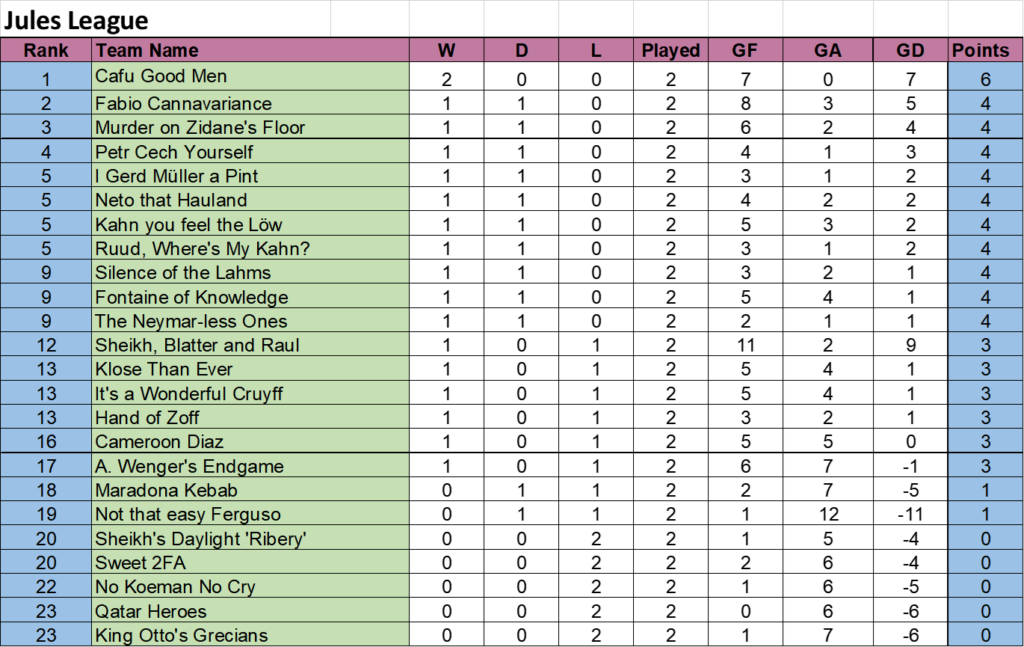 After the heady excitement of the opening day, and another week of sizing up the new signings,bonding the team and creating new transfer and chip strategies, it’s time to get the ball out and start delivering on all that pre-season hype. The hot weather cracked the template,we were blind-sided by a Rash outbreak and many were left Son-burned,but there were still points to be plundered in the less fashionable parts of town.

Check out these scores…

The Müllers got on the board as the Qatar Heroes continued to hit the wrong notes. FF Thinker set the tone with a goal in the H2Hs, Umberto was unbeatable in goal, and Billy Bremner (65pts) sealed the deal in the Squad match.

It was more tears for the home team as the Cafus were too good for the Koemen. PG was tipped to deliver a clean sheet, FPL Harry also delivered in the H2Hsm, and the Goodies also got the verdict in the Squad match to cruise to victory.

SWEET 2FA 0-1 THE NEYMAR-LESS ONES

Sweet 2FA were on course for victory but were left with sweet FA when the breaks at Old Trafford didn’t go their way. A tie in the Squad match meant it was all down to the H2Hs, and who needs Neymar when Bobby Love is on hand to clinch the winner.

The Cruyffs took a wrong turn on the trip to Cameroon Diaz and ended up in Pottersville. The Cameroons had dashed out to an early lead, but some dodgy goalkeeping almost undid all the good work. It took a late winner by The Overthinker in the H2Hs to secure victory for the Cameroons and leave Clarence having to wait another week to get his wings.

KLOSE THAN EVER 5-1 A. WENGER’S ENDGAME

Mr Wenger didn’t bring his A-game and this one wasn’t all that close thanks to a teutonic performance from the Klose squad. Krish and @AtifSayed_09 led the line with 60pts, and the end couldn’t come soon enough for the Wengers.

In a clash of MD1 winners, the Fontaine’s greater knowledge secured an early edge but the canny Fabios made a late charge to reduce the variance. When the dust settled, the H2H goals from Samwise and queen cola were balanced by the Fontaine squad, with Fpl Canada (63pts) and FPL Thinkerman (61pts) in particular showing how it’s done.

NETO THAT HAALAND 1-1 PETR CECH YOURSELF

The Haalands were hauling at half-time but their progress was checked in the nightcap, and they were unable to net the points. Their strong performance in the Squad match should secured more than one goal but inspired by Yossi (61pts), the Cechs limited the damage, and @EgyFPL struck an equaliser in the H2Hs, which means both teams retain their unbeaten records going into Matchday 3.

SILENCE OF THE LAHMS 1-1 MARADONNA KEBAB

With kebab on the menu, it was a tentative performance by the Lahms in their home opener, and it looked ominous as @DreadFPL kept it clean while Rey notched in the H2Hs. The silence was broken when the Lahms sprang into action in the Squad match, which proved just enough to restore parity.

It was regicide on Zidane’s Floor as the Greeks came bearing gaffs. Blue Lion was imperious in goal, Karan struck a brace and ItsaKnockaert knocked in another before the last rites were delivered in the Squad match.

In one of the shocks of the week, it was the Zoffs who palmed the points in a victory for good governance. It was a stalemate in the H2Hs but there was no need for backhanders in the Squad match as Sam FPL (61pts) led the line to leave the Sheiks battered. Having expected another goal feast, the crowd weren’t happy. Heads will Raul.

SHEIKH’S DAYLIGHT ‘RIBERY’ 1-3 CAN YOU FEEL THE LÖW TONIGHT?

The Löws are on a high after shaking down the Sheikhs in their own backyard. It was all square in the H2Hs after Dog God It and FPL Nits exchanged goals, but it was smash and grab in the Squad match with Fantasy Scout 11 (63 pts) and his crew touching the Sheikhs for a brace.

RUUD, WHERE’S MY KAHN 1-1 NOT THAT EASY FERGUSO

The Ruuds struggled to get the car started in their home opener but it wasn’t that easy for the Fergusos either, so it was no surprise that the points were shared. The Fergusos edged the H2Hs, with Yoga Febriano notching and, unlike last week, xxlaugh having plenty to smile about in goal, but there was a Ruud awakening in the Squad match.

It’s still early days but Cafu Good Men are the only team with a 100% record, with a furthere ten teams on 4pts. At the bottom King Ottos Grecians, Qatar Heroes, No Koeman No Cry, Sweet 2FA, and Sheikh’s Daylight ‘Ribery’ are still seeking their first points.

With both teams looking for their first points, it was Vivu Zizou who made some noise in the H2Hs courtesy of goals from FPL TRYBE and Lateriser. Seb Wassell reduced the deficit, and the Bandicoots completed the comeback in the Squad match. Honours even.

In a battle of Matchday 1 winners, it was old school versus the new kids on the block, and diversity won the day as the Banyana-Bafanas rallied to a narrow victory. The strikers all made hay but ultimately cancelled each other out; however, the Banyana-Bafanas came through in the Squad match with consistent performances all round, ably led by KevinRose@fpl_saffer (67pts).

The Hamsters were on the menu but it was the Britneys that took a pounding in the Podcast derby. Greyhead did his bit with a cleanie, which included keeping Boris Bodega at bay, and the Britney skipper, Chaballer, got on the scoresheet, but he might want to have a word with his squad who were unable to match the bite of the Hamsters. The Hamsters needed every point to secure a winning margin, and Zan Keroski led the line with 61pts. I doubt that Boris will have much to say about this in this week’s Podcast.

The Benzemas were hoping to cruise to victory but it was Weah Robben Banks who made off with the points. Following excellent glovework from Jigger and Pony, and hauls from 42Towels and Suarezista, the Squad stepped up to complete the getaway, and leave the Benzemas pondering life in the cellar.

There was a lot of product in this match, and the Grealish crew buffed up well for an early lead,but they were ultimately outgroomed by the greater pulling power of Ryan’s Rynaldos. There was much strutting in the H2Hs, where all of the strikers demonstrated their wares; but it was a scrimmage in the Squad and home advantage was just enough to see the Ronaldos home.

The Hurrikanes started off like a hurricane in the H2Hs, with both @mahmoudhachem and FPL Captain Denis notching. It’s no surprise the Werner Bros strikers found scoring difficult, but the wind dropped in the Squad match, and the comeback was on courtesy of geordienufc1 (65pts) and Naman Bhardwaj (60pts). The sequel should be fun.

Defences were on top in this match with Yinon and Sam Martin exchanging clean sheets, and it couldn’t have been closer in the Squad match where the Viking Seamen prevailed by a single point. With no points from two games, the Shelbys will need to play a blinder in Matchday 3.

Netflix and Chilwell trousered the points to secure their first victory and leave the Baggios at rock bottom. Albert Edwards repelled boarders in goal, Dan Bennett opened the scoring in the H2Hs, and the Netflex crew kept it chilled in the Squad match.

Weighed down by their team name, the Sevens were no match for the thirsty Suarez crew. Early portents were signalled by FPL Hints’ strike in the H2Hs, and the Fangs were out in the Squad match to drain all resolve and secure a 2-0 victory.

It should have been mission impossible, but the Mr Beans of the FPL arena were too canny for the spooks from Saville Rowe. With 68 pts, there was nothing fluky about Fpl Kely’s clean sheet for the Unbelievables, and while that was matched by Bullet, the Secret Service were firing blanks in the Squad match and the Geoffs prevailed with contributions from sidharth91 (61pts) and Phil Dagger (58pts) helping to seal the deal.

SHEARER’S BUNCH OF FLOWERS 5-1 PJANIC AT THE DISCO

After a slow start in Matchday 1, there was no cause for panic as last year’s winners bopped to their first victory. The mayhem started with goals from riot and Mreidfelt in the H2Hs, and there was further carnage in the Squad match, with LSK (62pts), Danelius and FPL Dreamers (both 59pts) all filling their boots.

One Tchouameni didn’t have enough as they slumped to defeat against the table-topping Gauchos. The goalkeepers were on top in the H2Hs, but the Squad match was a one-sided affair led by renalda with 63pts. The Grauchos could also afford to leave alifmojo (73pts), who achieved the top score in Matchday 2, on the bench.

Four teams have 100% records with Nusantara Gauchos leading Fangs of Suarez, Banyana-Bafana, and Lució and the Vikings on goals scored. The Sevens, Mercedes Benzema, Baggio Trousers, and Shelby Company Limited have yet to get off the mark.

After the early template points-feast, it was back to bread and dripping with top scores that would barely avoid a red arrow in Matchday 1. Honourable mentions go to Billy Bremner and gerdienufc1 with 65pts, and to KevinRose@fpl­_saffa (67pts). Alifmojo’s 73pts is this week’s top score but you can’t win prizes on the bench, so this week’s top banana is Fpl Kely with 68pts. Well done all.

The early leaders for the golden boot are FPL Noble Gent, k0k5t, FPL Sweens, FPL Flair, FPL Nair, The Overthinker, and Karan, each with two goals. Umberto and PG are leading the golden gloves race with four clean sheets.

In the Jules League, Cafu Good Men will be looking to maintain their perfect start against Cameroon Diaz, and if they slip up the winner of the Petr Cech Yourself – Murder on Zidane’s Floor matchup will be poised to take over at the top. In the basement, King Otto’s Grecians will be hoping to avoid Sheikh’s Daylight ‘Ribery’, and we can expect tears when Qatar Heroes and No Koeman No Cry get it on.

Turning to the Rimet League, there will be Pjanic at the Disco and everywhere else when Nusantara Gauchos turn up in search of a third successive victory. Fangs of Suarez will need to seduce Shearer’s bunch of Flowers to maintain their perfect start, whereas Banyana-Bafana and Lució and the Viking Seaman are hosting opponents seeking their first points. Baggio Trousers will be looking to get off the mark against Unbelievable Geoff; and Gentleman’s Grealish can expect a close shave when they encounter the pointless Shelby Company Limited.

The full list of Matchday 3 fixtures is as follows:

It’s now easier than ever to keep track of your team’s progress, or stalk your opponents, via Boris’ array of SKLW spreadsheets, which are available via this link.

Further mirth and frivolity is available via the weekly Podcast on the YouTube channel.

I’m off to find out who stole my Trent, Robbo, Cancelo, James, and Saka points. Good luck and stay safe.