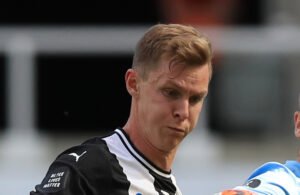 A total of 13 Premier League clubs were in EFL Cup action in midweek, while Manchester City were contesting a mid-season friendly in Barcelona.

We’ll bring you up to speed with all you need to know from a Fantasy perspective, from minutes played and injuries picked up to any wider talking points.

There were at least nine line-up changes made by 10 of the 13 Premier League clubs in EFL Cup action, with three of them – Brighton and Hove Albion, Brentford and Nottingham Forest – making wholesale alterations.

The managers of Aston Villa, Everton and Wolverhampton Wanderers went with strong line-ups; perhaps no surprise given that another defeat would have piled further pressure on Messrs Gerrard and Lampard especially.

Of the 48 FPL options currently owned by more than 8% of Fantasy bosses, only three – Kieran Trippier (£5.1m), bench fodder Sam Greenwood (£4.5m) and Ruben Dias (£6.0m) – played more than an hour. Substitute Trippier was only on the field so early because of an injury to Emil Krafth (£4.4m), who was stretchered off in the first half.

Dias, of course, wasn’t in EFL Cup action but rather involved in Manchester City’s friendly against Barcelona in Spain (City’s line-up below):

Due to managed minutes or complete non-involvement, all of the big names seemed to have emerged unscathed from the midweek EFL Cup action.

The following Fantasy footnotes were flagged after the midweek action:

Krafth’s injury seems to be the only real serious one from the midweek action, with Eddie Howe saying after full-time that “it doesn’t look good”.

Matt Targett (£4.9m) and Liam Cooper (£4.5m) were among the players returning from injury, meanwhile.

Of more interest perhaps was the players who remained on the sidelines: Jack Grealish (£6.9m) and Nathan Ake (£5.0m) weren’t involved for City, while Callum Wilson (£7.4m) was absent for Newcastle as assessment continues on a groin problem.

Friday’s pre-match press conferences will hopefully tell us more on that front.

Deep into stoppage time at the Nou Camp, Haaland and Barca’s Andreas Christensen came together in a tangle of legs. A spot-kick was duly awarded but up stepped Mahrez to convert and not his Nordic teammate.

This was the first time the two players had been on the same pitch for a City penalty, with Haaland scoring in Gameweek 1 when the Algerian was off the field.

There was nothing from Pep Guardiola after the match but the City boss had previously suggested that his players will decide between themselves who will step up for a penalty, while also praising Mahrez’s ability from 12 yards.

Elsewhere on penalty watch, Mateusz Klich (£4.9m) and Luka Milivojevic (£4.5m) stepped up for Leeds and Crystal Palace respectively but Rodrigo (£6.3m), Patrick Bamford (£7.4m) and Wilfried Zaha (£7.1m) were all off the field at the time.

And Raul Jimenez (£6.9m) looks set to remain first in line at Wolves – the benevolent Mexican stepped aside on Tuesday to give Hwang Hee-chan (£5.9m) the chance to net a confidence-boosting goal, only for the South Korea international to miss.

“Raul is a generous guy and also Hwang needs confidence, but this kind of thing is not for confidence and the guy who should take it is Raul. He took a decision to give the penalty to Hwang, but it’s not for that, it’s for the man who is supposed (to take it). I know the goals are important for players, but more important for me is the way they perform for the team and not for themselves. I understand, but I don’t agree and Raul should take the penalty.” – Bruno Lage

Villa’s team news was of interest, as Leon Bailey (£4.9m) was only among the substitutes as Watkins, Ings and Coutinho took to the field as the Villans’ front three.

Bailey emerged as a late replacement and scored a brilliant goal to round off a 4-1 victory; does a 19-minute cameo bode well for a start in Gameweek 4 or does the generous Tuesday-Sunday turnaround mean that we can’t take many clues from the EFL Cup line-up?

Villa have one of the most tightly packed schedules from Gameweek 4-6 so the midweek rest does raise the hopes of at least two starts for the Jamaica international over this period.

Exisiting and prospective owners of Gundogan will be keenly following the ‘will he, won’t he’ saga concerning Bernardo Silva (£6.8m) and a possible move to Barcelona.

Gundogan benefitted from some extended game-time in the first two Gameweeks while the reported tussle for Bernardo’s services played out, while the pair were used in the same line-up at Newcastle on Sunday. The hubbub seemed to have calmed down in the last week but comments from both Barca boss Xavi and indeed Guardiola after Wednesday’s game suggest we might not quite be done yet.

“I’m no one to tell Barca to forget about Bernardo. We want him to stay with us, but I don’t want anyone who’s not happy. The first thing would be for the clubs to come to an agreement, but there has been no offer for him in these last two years.

“I don’t want him to go, he’s a superlative player and a great person… and there are only seven or eight days left (in the window) and we would have to turn to the transfer market. I want him to stay. That said, it is true Bernardo likes Barcelona a lot.” – Pep Guardiola