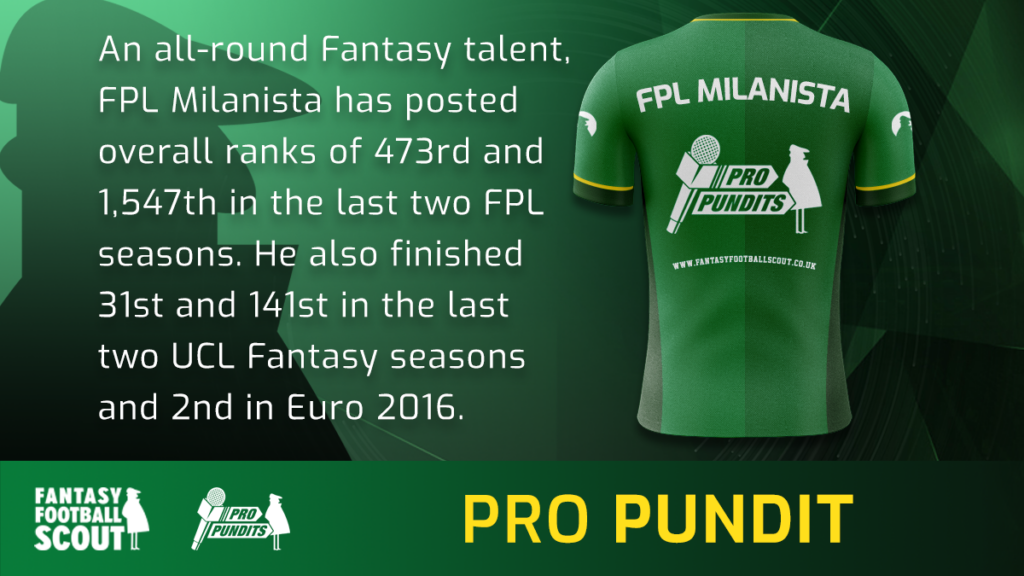 With Gameweek 4 of Fantasy Premier League (FPL) almost upon us, we’re once again getting tips and advice from our top team of Pro Pundits, Hall of Famers and guest contributors.

Next up is FPL Milanista, who is ranked 50th in our Hall of Fame and has posted overall ranks of 473rd and 1,547th in the last two FPL seasons. He is also a nine-year veteran of the Fantasy Football Scout site.

Gameweek 3 was not free-scoring but it was one that we can learn a lot from. One of the most important Fantasy Football traits that must be carried by any successful manager was grossly illustrated here – patience is a virtue.

It is always said that a person who can wait for something without frustration is possessing a very useful skill and that is exactly what you need in FPL. Owners of Ivan Perisic (£5.5m, 12 points) and Marcus Rashford (£6.3m, ten points) will understand.

However, instead of being distressed by past events, we shall keep our minds focused on what is happening next. A lot of social media talk has circulated about how badly the premium defenders failed in Gameweek 3 and, alongside the suspended Kalidou Koulibaly, we see Trent Alexander-Arnold (£7.5m), Reece James (£6.1m), Joao Cancelo (£7.1m) and Andrew Robertson (£6.9m) amongst the five most transferred-out defenders.

So is this a logical move? Not really. These four premiums are exactly the ones in my own squad and I haven’t even considered letting any of them go.

Even if I was Wildcarding today, they would certainly remain in there without hesitation. Each is playing at home in a favourable Gameweek 4 fixture and we all know how explosive they can be on their day. Let’s just look at Perisic’s haul and hope that this weekend will bring similar rewards for these.

Additionally, here are some relevant stats to determine if we are being just blinded by their past historical FPL points or if they have simply been unlucky of late.

Alexander-Arnold, as always, is still dominating all creativity stats among defenders throughout the first three Gameweeks, with his 1.15 expected assists (xA), eight chances created and two big chances created top of the list.