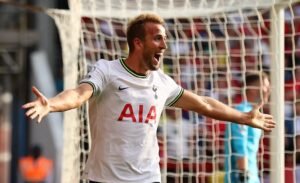 Having already brought you the statistical summary of Sunday’s Gameweek 4 action, we now turn our attention to the wider Fantasy Premier League (FPL) talking points from the day’s fixtures.

The numbers from this article are from our Premium Members Area, where you can access Opta player and team data for every single Premier League fixture.

Harry Kane (£11.4m) scored twice but was denied a hat-trick by Dean Henderson’s (£4.6m) penalty save, as Tottenham Hotspur secured a hard-fought 2-0 win over Nottingham Forest.

The England captain’s brace means he’s now scored in three successive matches and is joint-third in the forward standings, level with Gabriel Jesus (£8.2m) on 26 points.

However, Son Heung-min (£11.8m) had another day to forget, as he touched the ball just 11 times in the final-third and was hooked for Richarlison (£8.5m) after 74 minutes. The fact the Brazilian made an instant impact, with a superb assist for Kane’s second, is also notable ahead of the first midweek round of matches in 2022/23.

“If you want to be a top team you have to compete for every position and I think that’s what we have got now. We will need everyone. Of course, Son will be frustrated not to have scored so far this season but he is an important player for us. Also, when players are not quite at it you need players to come off the bench and have an impact and Richarlison is doing that.” – Harry Kane on the competition for places between Son Heung-min and Richarlison

Ivan Perisic (£5.5m), meanwhile, was pushed back for large periods, with Morgan Gibbs-White (£5.5m) and Neco Williams (£4.1m) keeping him busy, but would have been awarded the assist for Kane’s penalty had he scored.

“We dropped deep in the first half which we’ve done a lot already this season and it’s taken us until the second half to get a bit of a wake-up call and be a bit more aggressive. We become better on the ball because of it. We got away with it in the first half this week because we went 1-0 up. It could easily have been a difficult story. It’s something we need to fix and quickly because we have a lot of games coming up in a short space of time so we can’t afford not to start the first half well.

Any Premier League game we expect a tough match, especially away from home. We had a great pre-season and physically feel really good. We’re just not quite showing it yet. We’re still winning games which is the most important thing. We’re becoming stronger as the game goes on. There’s a long season left and we’re still grinding out wins when we’re not playing our best which is important.

We have a fantastic manager, a really strong squad and we will need that squad over the next period as it’s a busy schedule. It’s important those players who haven’t started games yet to be ready for their opportunity. We have started well but as we know in the Premier League it can soon turn around.” – Harry Kane

As for Forest, Henderson’s second penalty save of the season has taken him to the top of the goalkeeper standings on 30 points, while in attack, new signing Gibbs-White and Brennan Johnson (£5.9m) were lively throughout.

Notably, the former was on some set-pieces and ended the match with two goal attempts, two created chances, nine attempted crosses and 47 final-third touches, more than any other player on the pitch.

Despite a decent all-round performance, Forest have allowed their opponents to take 79 shots this season, at least 12 more than any other top-flight side, with a trip to Manchester City up next in Gameweek 5.

“That’s how we want to play. We did a lot of good things in the performance today. Our build-up play was excellent. What we didn’t do was the hardest bit and threaten the goal enough. We had enough opportunities to do that. We had some chances we should have done better with. We should be getting efforts on goal. For all the positive things people will say we do those things to try to score goals and we didn’t do that today. The idea is to keep progressing and building. If we get it right, we could be a good team. That’s what we want. We’ll stick to that plan. We play Manchester City next and they’ve had an extra day to prepare. Thank you, Premier League, for that.” – Steve Cooper

However, after a lackluster first-half showing, he reverted to a 4-2-3-1 and sent on Said Benrahma (£5.9m) for Emerson, changes that proved to be the catalyst for their win.

“Emerson was fine, we just felt we couldn’t get him the ball, we didn’t get much service and we weren’t passing the ball well enough to really use him. I decided to make the change at half-time.” – David Moyes on Emerson Palmieri

“I thought Said (Benrahma) made a difference. He had a good pre-season but Said sometimes makes good decisions and sometimes doesn’t, which can frustrate me as a manager. But he came on and turned the game for us in many ways. We’re trying to piece together a new team but I thought it was the players who know how we’ve played in recent years that dug deep when we got the goal and helped us get the three points on the road which is really important.” – David Moyes

Lucas Paqueta’s imminent arrival, coupled with their first win of season, should give West Ham a boost as they prepare to face Tottenham Hotspur on Wednesday before Sunday’s trip to Chelsea.

As for Aston Villa, it’s now three defeats in four games this season, as pressure starts to build on Steven Gerrard. Indeed, this was their ninth loss in their last 15 Premier League matches.

Aside from the odd moment, there was very little to get excited about, with forward players Ollie Watkins (£7.4m) and Danny Ings (£6.9m) feeding off scraps. Leon Bailey (£4.8m) was introduced after 78 minutes as Gerrard utilised all of his attacking options, but it failed to ignite a Villa side severely lacking in confidence.

“We haven’t done a lot wrong today. We could have been a bit more imaginative or creative in the final third but in terms of how the game looked, Emi’s (Martinez) been relatively quiet. This wasn’t through a lack of effort. The players who came off gave everything they’ve got. We threw our creative players at it to see if they could find the spark – Emi Buendia, Leon Bailey, Jacob Ramsey. We tried to be more aggressive but we just couldn’t find that opening.” – Steven Gerrard

Tyrone Mings (£4.4m), meanwhile, was absent due to illness, adding to Gerrard’s woes after Diego Carlos (£4.8m) ruptured his Achilles’ tendon in Gameweek 2.

“It’s not ideal when you lose a player of his importance, but it’s the reason why I always like to have four centre-backs because obviously we’ve got a severe injury to one and if you’re faced with these situations, you’ve got to adapt and have people that can cover.” – Steven Gerrard on Tyrone Mings

Newcastle United maintained their unbeaten start to the season after a stunning last-minute Allan Saint-Maximin (£6.5m) equaliser at Molineux.

Eddie Howe had challenged the Frenchman to “bring it” every week in the build-up and he stepped up when it mattered most, recording his first goal of the season. Notably, Saint-Maximin has now produced attacking returns in successive Gameweeks, following his trio of assists against champions Manchester City.

Despite dominating possession, the Magpies weren’t at their best without the influential Bruno Guimaraes (£5.8m) and Callum Wilson (£7.4m), both of whom missed out through injury. However, they did rack up 21 goal attempts and were inches away from winning it deep into injury time when substitute Elliot Anderson (£4.5m) hit the bar following a corner.

“He has a slight niggle and I don’t think it’s anything serious. We hope he won’t miss too much. Liverpool might be too soon.” – Eddie Howe on Bruno Guimaraes

Alexander Isak (£7.0m), meanwhile, did not feature despite travelling with the squad, as he is still waiting for international clearance.

Ruben Neves (£5.5m) had put Wolverhampton Wanderers ahead in the first half, but after conceding late on are still yet to win after four Premier League matches.

However, there were signs of improvement, with Pedro Neto (£5.3m) lively and Raul Jimenez (£6.9m) completing 90 minutes after injury. Indeed, the duo almost combined for the host’s second, only for the goal to be ruled out by VAR for a foul in the build-up.

“Nelson (Semedo) was brave, Raul (Jimenez) was brave, Guedes was brave, and these guys just arrived. You try to manage the game in the best way, I was looking to Raul, but he was so important at set pieces. If you take him off, you have a less tall man in the box to defend situations.” – Bruno Lage