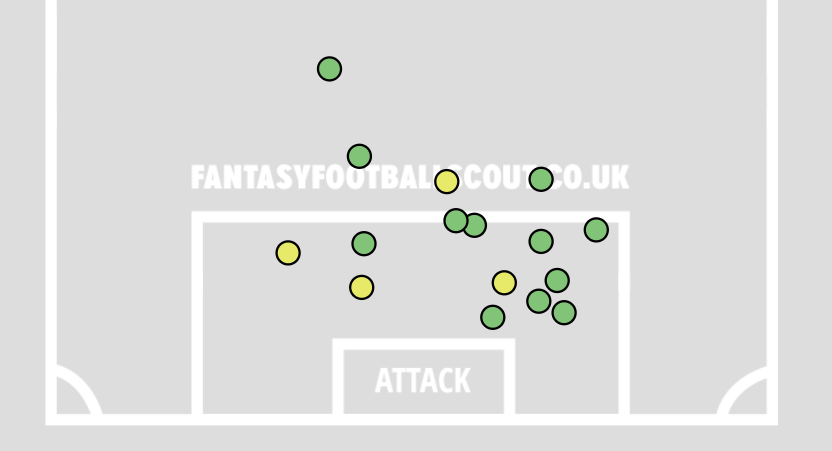 Having already brought you the statistical summary of Tuesday’s Gameweek 5 action, we now turn our attention to the wider Fantasy Premier League (FPL) talking points from the fixtures.

The numbers and graphics you see in this article are from our Premium Members area, where you can access Opta player and team data for every single Premier League fixture.

Gameweek 5’s most transferred in player, Rodrigo Moreno (£6.5m), went off injured inside the first-half at Elland Road with a dislocated shoulder.

“He dislocated his shoulder so the question is how much damage was done in that action. Sometimes it can be a week, sometimes it can be two months depending on the damage. He feels better, which is a good sign but we need a scan. I thought Patrick Bamford did well and held up some balls and combined. I also think Joffy (Gelhardt) played well. It is not always easy to take a player in and then out. We like those guys and have quality up front. We will find ways to be more dangerous.” – Jesse Marsch on Rodrigo and his other forward options

“They popped it back in and seems to be ok. He will have a scan.” – Jesse Marsch on Rodrigo

In terms of the match itself, Luis Sinisterra (£6.5m) scored his first Premier League goal for Leeds United, while Anthony Gordon (£5.5m) netted for a second successive game.

The Everton wingers underlying statistics are worth noting, given that he ranks second among all midfielders for goal attempts (16) and shots in the box (12) this season. If a move to Chelsea doesn’t materialise before the transfer window slams shuts, he should offer value given his budget price tag.

Above: Anthony Gordon’s 2022/23 shot map, with his efforts on target in green

“I talked to Anthony (Gordon) a lot about getting in goal scoring positions and scoring. It is the difference between a good and great winger. He has every potential to be a great winger and that means double figures every season. You have to put pressure on yourself, get in those positions, practice them, train them and be calm when you get there. It is a big step forward for him to score two in two. He can take that forward. We are playing games at the minute without an out-and-out striker. We need that output from our wingers. Now we have a striker for the next game and we get stronger.” – Frank Lampard on Anthony Gordon

“We have had Neal (Maupay) for four days. He should be able to play the game as far as I am concerned. We registered him on Friday but it wasn’t registered because it is a bank holiday weekend. There is nothing we can do about it. It’s disappointing. If the matchday is tomorrow he plays but because of TV, they tell us what days to play. We need him. The striker option and different type of player to offer something different.” – Frank Lampard on Neal Maupay’s absence

Aleksandar Mitrovic (£6.7m) netted his fifth goal of the season as Fulham brought Brighton and Hove Albion’s unbeaten start to an end with a 2-1 win at Craven Cottage.

The 27-year-old opened the scoring on 48 minutes, before a second for Fulham followed shortly after when Lewis Dunk (£4.6m) put the ball through his own net from an Andreas Pereira (£4.5m) cross, a timely assist given that many managers had turned to the playmaker in the absence of Reece James (£6.1m).

As for Mitrovic, he is now up to second in the forward standings, having blanked in just one of his five appearances. It’s also worth noting that he has had more goal attempts (22), shots in the box (19) and efforts on target (12) than any other player so far.

“He was unbelievable. Not just because he scored. All strikers need goals and you could see after he scored it was a boost for him and he was everywhere. He was good on the ball but off the ball he was unbelievable. He is not just a goalscorer for us, he is much more than that.” – Marco Silva on Aleksandar Mitrovic

Fulham have now picked up seven points in their first three games at Craven Cottage, a very respectable start for a newly-promoted team. The immediate fixtures admittedly aren’t great, with Tottenham Hotspur (a) and Chelsea (h) up next, but things improve drastically in Gameweek 8, when they jump to the top of our Season Ticker right up until Gameweek 14.

As for Brighton, they lined up without a number nine, and instead turned to Leandro Trossard (£6.5m) up top, which didn’t really work. Their goal, meanwhile, arrived from an Alexis Mac Allister (£5.5m) penalty after Pervis Estupinan (£4.5m) was fouled.

“We missed Danny Welbeck a bit up front but that’s life. He took a couple of heavy knocks against Leeds and I don’t regret the decision not to start him.” – Graham Potter

With Reece James absent through illness, Chelsea slumped to a woeful 2-1 defeat at Southampton in Gameweek 5. The Blues were carved open a number of times and have now conceded eight goals in their last four Premier League matches.

However, their evening started perfectly when Raheem Sterling (£9.9m) continued his run of goalscoring form, netting his team’s opener. As a result, he has now scored three goals in his last two starts and feels like a decent differential given that his ownership sits at just 7.1 per cent.

“It is too easy to put us off balance, to beat us, to confuse us. It is too easy. It happened against Leeds. We need to understand why and find solutions. We lose concentration, we lose our plan and lose consistency, it is too easy to beat us. A lot of key players are injured, it is something I don’t really understand. You can always lose football matches and I am humble enough to admit this but, in a match where you are in the lead there is no need to give away half chances. To have no answers in the second half was disappointing. We need to have answers, we need to step up and play a level higher if needed. We struggled to do this.” – Thomas Tuchel

As for Southampton, they deserve a lot of credit for their win, with budget midfielder Romeo Lavia (£4.5m) scoring his first goal for the club and impressing in the engine room. However, it looks like the youngster is set for a spell on the sidelines, having been taken off injured after the break.

“The negative thing is he is maybe injured now for a few weeks, so not perfect.” – Ralph Hasenhuttl on Romeo Lavia

Wilfried Zaha (£7.1m) returned to the starting XI after missing Gameweek 4 and produced a moment of magic to break the deadlock.

The Ivory Coast international racked up match-leading totals for shots in the box (four) and penalty box touches (10), and is now up to four goals for the season.

Brentford, meanwhile, switched from a 4-3-3 formation to a 3-5-2 in the second-half in an attempt to score. That coincided with Josh Dasilva (£4.6m) being introduced from the bench after 68 minutes. However, it was another substitute, Yoane Wissa (£5.4m), who’s late header rescued a draw, while Bryan Mbeumo (£6.0m) and Ben Mee (£4.6m) both came close to scoring in stoppage time.

Notably, the Bees have now conceded in each of their last 19 Premier League away fixtures.