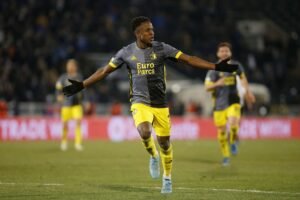 Gameweek 6 of Fantasy Premier League (FPL) is fast approaching, which gives us an opportunity to have a look at some more differential options.

This time, we’ve selected low-owned picks at Leeds United, Brighton and Hove Albion and Nottingham Forest, who we think have the potential to make an impact.

Two of them indeed are £6.5m-and-under midfielders, for FPL managers looking for a Rodrigo (£6.5m) replacement now that the Spaniard is out for up to a month.

Luis Sinisterra (£6.5m) struck a second-half equaliser on his full Premier League debut to secure a point for Leeds United against Everton on Tuesday.

The Colombian winger, who scored in last week’s Carabao Cup win over Barnsley, whipped in his side’s only goal from the edge of the box. He also missed a sitter at the Amex in Gameweek 4.

“Yeah, I mean, it’s not about repaying me. It’s about his ability, he will show more and more his ability, right. He’s a special player, and he has a special combination of athleticism and power with football and cleverness, and then finishing ability so I think it’s just – it’s obviously I’m really happy for him to get on the scoring sheet and I think he’s only going to get better.” – Jesse Marsch on Luis Sinisterra

Sinisterra enjoyed a productive 2021/22 season with Feyenoord, scoring 23 goals and providing 14 assists in 49 appearances in all competitions, helping the Dutch side reach the UEFA Europa Conference League final and finish third in the Eredivisie.

In terms of his playing style, he is extremely direct and attempted more take-ons than any other player in the Eredivisie last term. It’s also worth noting that only two players – Ajax duo Dusan Tadic and Steven Berghuis – created more chances from open play.

Leeds are joint-fifth in the table with eight points and have lost just one of their opening five top-flight fixtures. Jesse Marsch has said he’s “really pleased with the direction” in which his side are heading, ahead of Saturday’s visit to a leaky Brentford side. After that, three of their next four opponents rank amongst the bottom six Premier League sides for expected goals conceded (xGC) so far.

Sinisterra looks like the ideal man to replace Raphinha at Leeds, and a nice differential for those in the market for a mid-price midfielder.

Danny Welbeck (£6.5m) has made a decent start to the season for Brighton and Hove Albion and was missed against Fulham on Tuesday.

In his absence, Leandro Trossard (£6.5m) was deployed as a false nine, forming an unfamiliar front trio with Pascal Gross (£5.9m) and Enock Mwepu (£5.3m). However, they struggled to make an impact, with Albion missing a focal point up top.

So, why didn’t the 31-year-old start? Graham Potter said it was to protect the former Arsenal and Manchester United forward, who had played the full match against Leeds United in Gameweek 4 and suffered a couple of knocks.

“We’ve got him to a point where he’s playing as well as he has since he’s been with us. Training and games and loading. We just felt it was a little bit soon for him having not had that type of exposure for a while. It was my decision — he had a couple of knocks at the weekend. Recovery wasn’t as optimal as it can be which can sometimes happen. I thought we’d play a bit better than we did, but clearly Danny is a key player for us.” – Graham Potter on Danny Welbeck

Despite failing to score this season, Welbeck has produced a couple of assists, with his eight created chances more than any other FPL forward bar Harry Kane (£11.4m) and Ivan Toney (£7.2m). Six shots in the box is admittedly on the low side, but he was averaging just under three per match in his final five appearances of 2021/22, so there is potential to improve.

Tuesday’s loss at Fulham ended Brighton’s unbeaten start to the season. However, 10 points from the first five games is encouraging, ahead of three appealing fixtures against Leicester City, Bournemouth and Crystal Palace. Those opponents have already conceded 10, 16 and nine goals respectively in 2022/23. It’s also worth noting that Welbeck scored in both league meetings with the Foxes last season, a 2-1 win at the Amex and a 1-1 draw in the return fixture.

Welbeck surely won’t be left out again in Gameweek 6, which suggests he can offer value for those managers wishing to include a third forward in their set-ups.

Morgan Gibbs-White (£5.5m) has settled in well at Nottingham Forest following his transfer from Wolverhampton Wanderers.

Since making his debut as a substitute at Goodison Park in Gameweek 3, the 22-year-old has taken on an advanced role in Steve Cooper’s 3-5-2 formation and been heavily involved at set-pieces.

His underlying numbers in that time are fairly unremarkable (three shots, two created chances), but that isn’t unexpected given that Forest have faced Manchester City and Tottenham Hotspur in the last two rounds.

Gibbs-White’s relationship with Cooper also suggests he can hit the ground running. Indeed, he was one of his most trusted figures when England’s Under-17 side lifted the World Cup in 2017. They also worked together at Swansea City in 2020, when Cooper handed him the role just behind the forwards in a 3-4-1-2 formation, similar to the one he uses at Forest now.

Between now and Gameweek 11, Forest face Bournemouth, Leeds United, Fulham, Leicester City, Aston Villa and Wolverhampton Wanderers, which should give them an opportunity to put some points on the board. The first of those against the Cherries is very appealing, too, given that they have conceded a league-high 16 goals since last scoring themselves.

Gibbs-White was one of Sheffield United’s stand-out players in the Championship last term, netting 12 goals and providing 10 assists. Now, he could be a decent budget differential, perhaps for those looking to move Pedro Neto (£5.2m) or Leon Bailey (£4.7m) on ahead of Gameweek 6.