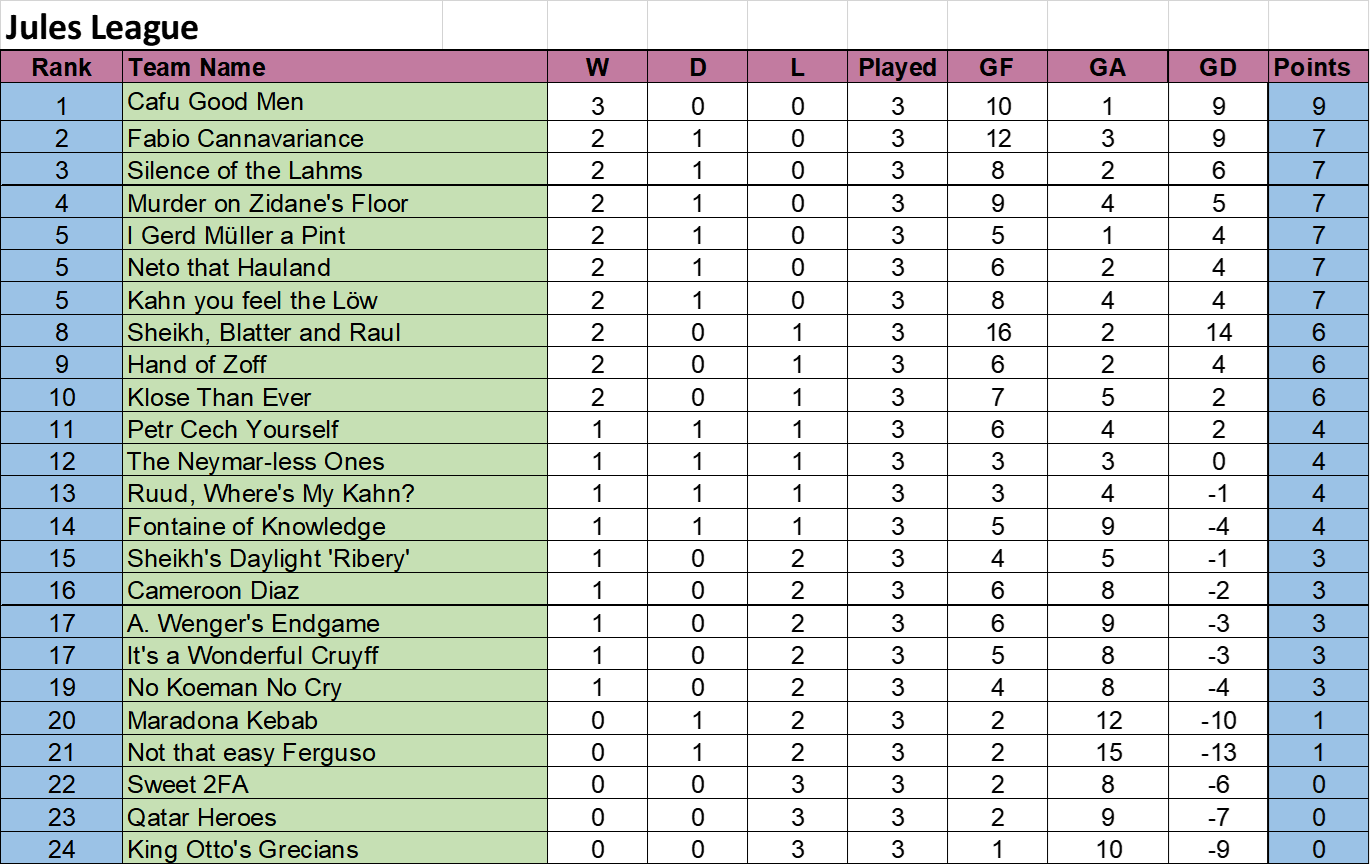 Matchday three of the SKLW tournament, and there were many swings of fortune between the PL matches on Saturday, and those on Sunday. Many of the eventual victors will have heaved a sigh of relief. The team lineups get released 15 minutes after the FPL deadline each matchweek, and apart from being able to view your opponents chosen strikers and keepers, we also get to see the differentials. Nothing unsettles the nerves more than seeing a plethora of Salahs on your foe’s differential list, but many of those mavericks will have had their butterflies turned to fiery flames of wanton celebration. To dare is to do, as Greyhead once told me.

No virtuoso solos from the home team, as despite having a vastly superior squad score, their keeper was in tears. Mark Mansfield grabbed a brace and Dannymorata got the winning goal, as Kden FPL kept a double clean sheet for the Koemans.

The Müllers were seen downing more lagers as they continued their unbeaten run. The Sweets may rue their prophetic team name as they remain winless and without draws, which can lead to chills! No frills in the H2Hs, both FPL Planner and Umberto repelled all goal attempts by their opposition strikers.

Goals for both sides, but Cafu good men had a few good goals too many for the Cameroons. Both Zrinkec and Briz grabbed strikers’ goals, and another squad goal made it three. Suvansh Singh grabbed a consolation goal for the away side.

The Neymar-less Ones 1 – 2 Klose Than Ever

Leaving FPL Editor, their second highest scoring player of the week, on the bench denied the You Know Whos a draw, as this match was..ahem..close. Indeed the home team did get a squad goal, but away strikers Zeeshan and FPL Goat both scored to celebrate victory for team Klose Than Ever.

Not so wonderful for the Cruyffs this week, as the Fabios had all the answers. Striker goals for both UkendtPerson45 and queen cola, while away keeper Hedgehog FPL repelled all attempts on his goal, FPL Spaceman could even afford to leave their highest scorer FPL Echidna on the bench,

A Wenger’s Endgame 0 – 2 Neto that Hauland

The Wengers find themselves in the red part of the league, suffering a defeat to the Haulands. No fireworks in the H2Hs, both FPL Banger and FPL Sabic kept clean sheets. The squad score was decided by the away side having 5 more Gabriels at their disposal.

Fontaine of Knowledge 0 – 5 Silence of the Lahms

The knowledge fountain got bunged up for the home side as they shipped five to the Lahms. Two squad goals conceded was bad enough, but former champion Jamie Pigott was humiliated by the away strikers. FPL Salah (2) and Peteski29 (1) were seen enjoying some fava beans with a nice chianti after the game!

Zinedine was left cleaning his disco, after his team won this bloodbath by the skin of their teeth. FPL Mihir, FPL Psycho, Green Dragon and Jigar Doshi all scored goals as strikers, leaving it down to the squad score to decide the match…by three single points! Petr Cech Yourself into rehab boys, this one will sting.

The Kebabs got skewered by the Blatters, who continue their habit of yo-yoing between wins and losses. Three squad goals courtesy of the second highest squad score of the week, along with goals from strikers FPLRobbed and Sugurd, future opponents will have to pray for an off day when facing this imperious team of FPL players.

Even keeper Fabio Borges could not prevent Shivam Ahuja pilfering a brace with a huge score of 104 as the Riberies plundered goal after goal from the home side. The Grecians actually had a pretty impressive squad score, but the away team had the highest of the week, and stole all three match points.

In a rather rude gesture, the Zoffs said ‘hands off’ to the away team, and pocketed all three match points. Dominating in all departments, strikers Sam FPL and FPL TT both scored, keeper FPL Spartan let nothing in, and an extra goal from the squad sealed the win for the Zoffs.

Kahn you feel the Löw tonight? 3 – 1 Not that easy Ferguso

The Fergusos found it hard, as the Löws definitely felt the moist, warm lurve one only gets from scoring goals. Striker goals apiece for FPL Ghost and FPL Darkest Knight, and the home side also got a squad goal to boot. Eko Puji Perwanto did get a consolation strike for the away side.

Cafu Good Men continue defying the odds and are unbeaten with nine match points, but are only one loss away from letting in any of the six sides who sit just two match points behind them. At the bottom end, Sweet 2FA, Qatar Heroes and King Otto’s Grecians are all pointless so far.

Gross and Diaz were the differentials that Garuda needed to secure their second win of the tournament. Both keepers George Pîrcãlabu and Tom Stephenson did enough to ward off their opposition strikers, and the Vuvus remain in the red zone with only a single match point so far.

The bandicoots failed to cash in on some fine differentials as the hamsters clawed their way to a narrow victory, despite taking a 12 point deduction for hits. Both Seb Wassell and Zan Keroski denied their opposition strikers, and it was Kane and Henderson’s points that proved decisive in this close match.

FPL Bharat with a single striker goal managed to swerve the Benzemas away from a car crash and the Bafanas had to settle for a draw. A shout out to the away keeper FPL Tombadinho whose clean sheets proved essential.

The ronaldos may well feel a tad a-Greaves-ed (see what I did there?) as they were only a Newcastle clean sheet away from victory. Saint-Maximin’s wonder goal must have been cheered by the britneys – it all would have been so much easier if TopMarx’s 106 points hadn’t been benched…

The bank robbers got nabbed as the hurricanes stole away their thunder. A goal for striker Sam and a clean sheet for the aptly named FPL Keepers got them ahead, and an extra squad goal rubbed the robbers noses in it.

Without breaking a sweat, those suave gentlemen coolly strutted away with three match points. Neither of the home strikers, FPL Noble Gent or FPL A+ could squeeze past Zophar, who played a (peaky) blinder in the away goal, but three goals from the home side’s squad  put the game to rest.

The away side did indeed feel well chilled, and will have to bump their heads together to work out how they left Asika Jordan’s 107 points on the bench. It proved fatal, as a striker goal apiece for Tonker007 and Albert Edwards, left the deciding factor to the squad score, and the Werners winning by just 7 points! Th-th-th-that’s all, folks

Fittingly we saw seven goals in this high scoring face off. All four strikers grabbed a goal each, leaving the squad to decide the winner. The sevens had 12 points in hits while the seamans had the differentials and the home side sailed off into the sunset with three match points.

Both keepers were flawless in goal, leaving this match to the squads to decide. And oh what fun they had when the baggios discovered they had the better differentials. Four Haalands and Diazs later, it really did turn out bad as the away side found themselves, unbelievably Geoff, four goals down.

The flowers got the H2Hs right, with Wight Bear keeping his goal spotless, and LSK grabbing a striker goal. But the fangs sucked the away team’s spirit dry with a brace of goals from their squad, and it was Danelius’ team who got a stake in the heart in this closely fought contest.

It was seven Tchouameni in the end, as the Klinsmen sent in their assassins FPL_PEP_TALK and FPL Gills who scored two goals each for the home team. The aptly named Bullet kept a clean sheet, and in true cold blooded fashion, they finished off their opponents with three more shots from their squad. Licence to kill? More like a licence to obliterate!

Pjanic at the Disco 3 – 0 Nusantara Gauchos

The only ones soiling themselves on the dancefloor were the gauchos sadly. Both keepers Chayuth Wongthongsri and FPL Robbie did the business to keep the strikers at bay, but the pjanics calmly fox-trotted in seven Diaz differentials to get a hat trick from their squad.

Lucio and the Viking Seaman fly to the top of their league table with three straight wins, but also boasting nine match points are Fangs of Suarez in second, biting at their ankles. Only Shelby Company Limited and the Sevens are without points in this league, so both will be looking for a more favourable opponent in the next round taking place in GW6. 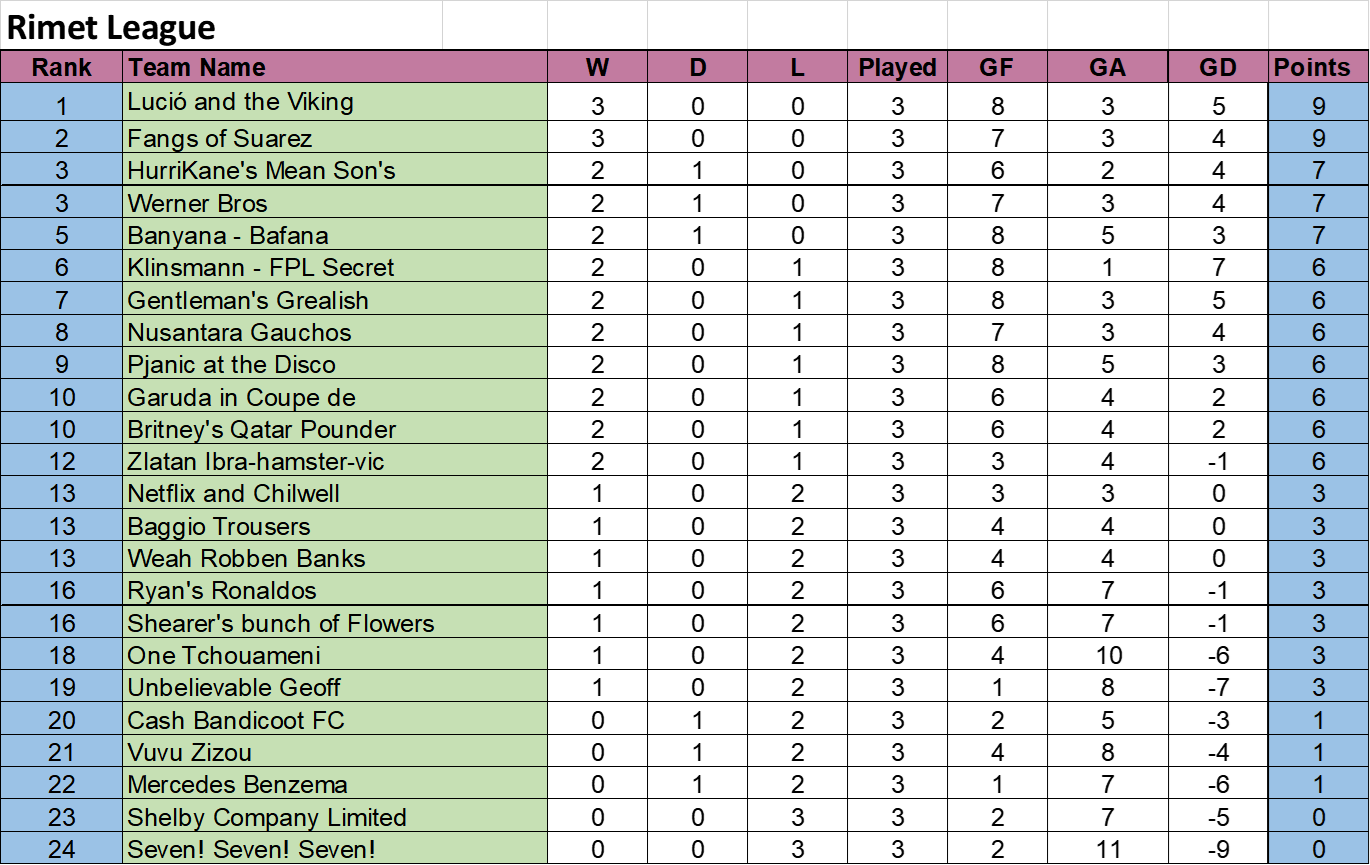 Top scorer of the week was Asika Jordan from Netflix and Chilwel with a score of 107, closely followed by TopMarx of team Britney who had 106. Shivam Ahuja from Sheikh’s daylight ‘Ribery’ scored an impressive 104.

Silence of the Lahms can boast having the best performing striker, FPL Salah scoring the goals for his team, and Umberto from team I Gerd Müller a Pint has an incredible six clean sheets out of six in goal! 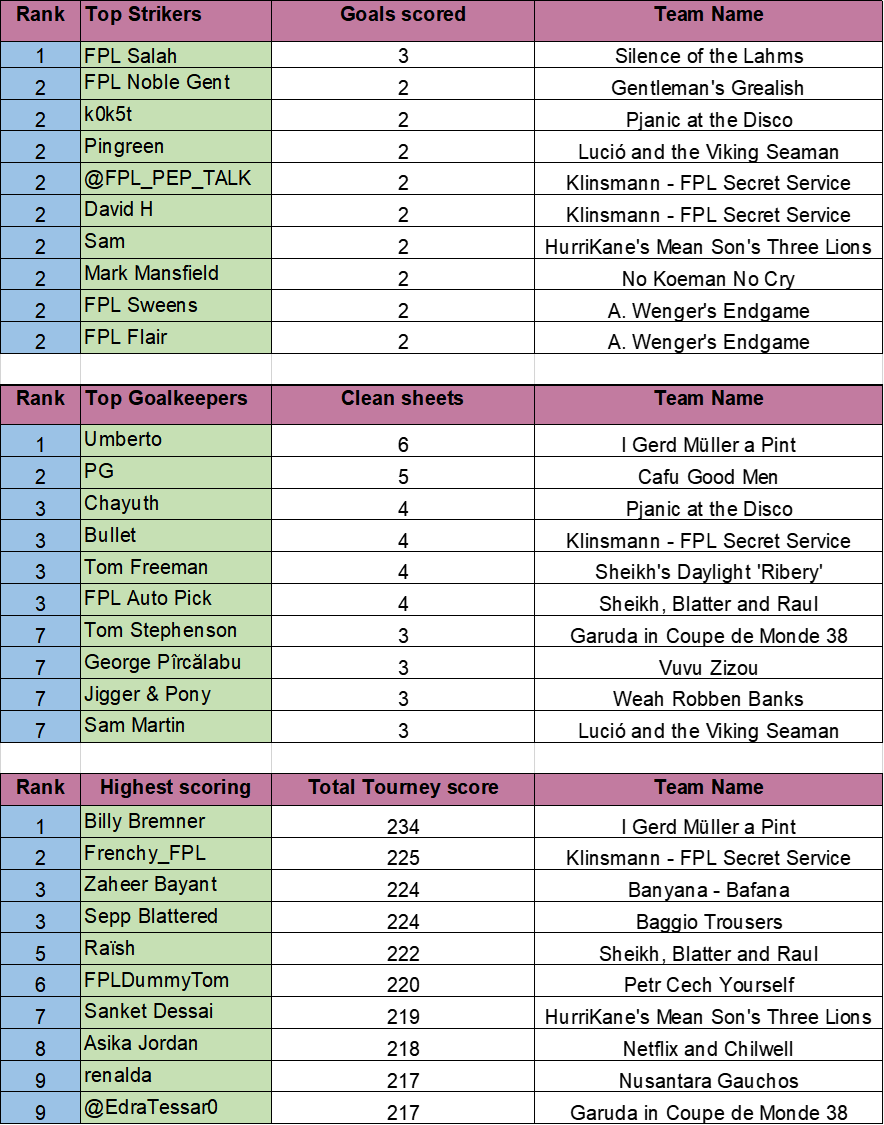 The midweek GW5 fixtures have been written off for this tournament, so MD4 will take place in GW6.

In the Jules league, with both teams desperate for match points, Sweet 2FA and Qatar Heroes face each other to see who will get off the mark first. Fabio Cannavariance will go up against their rivals Cafu Good Men hoping to steal their number one spot. And Neto that Hauland will need their MVP Mark Sutherns to get back to his high scoring best if they are to defeat The Neymar-less Ones.

The full list of matchday 4 fixtures is as follows: 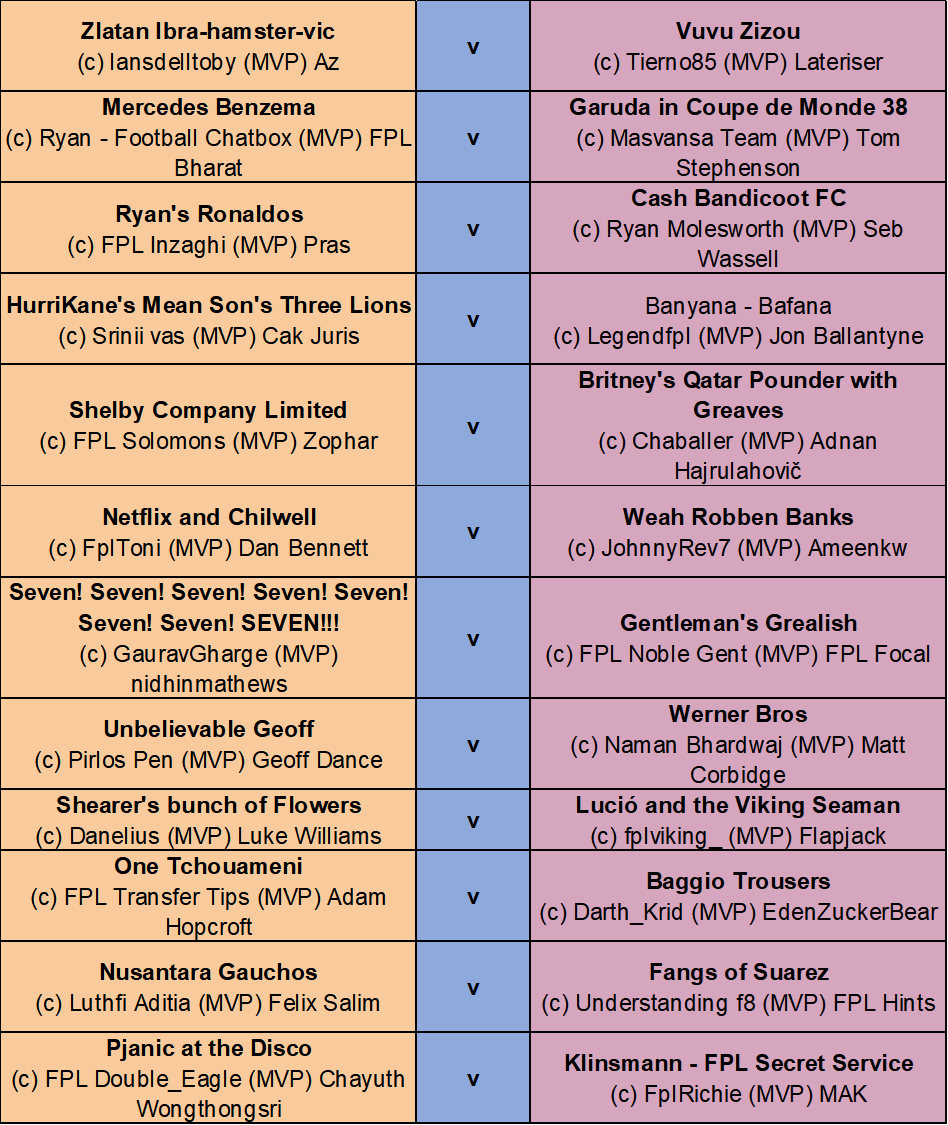 Boris and Greyhead are beginning to get the hang of live streaming, and their next one will be live at 6pm Wednesday 31st August and can be seen here.

Thanks for reading, and good luck to all (except the Vuvus obviously, the Hamsters don’t like big, loud instruments!)