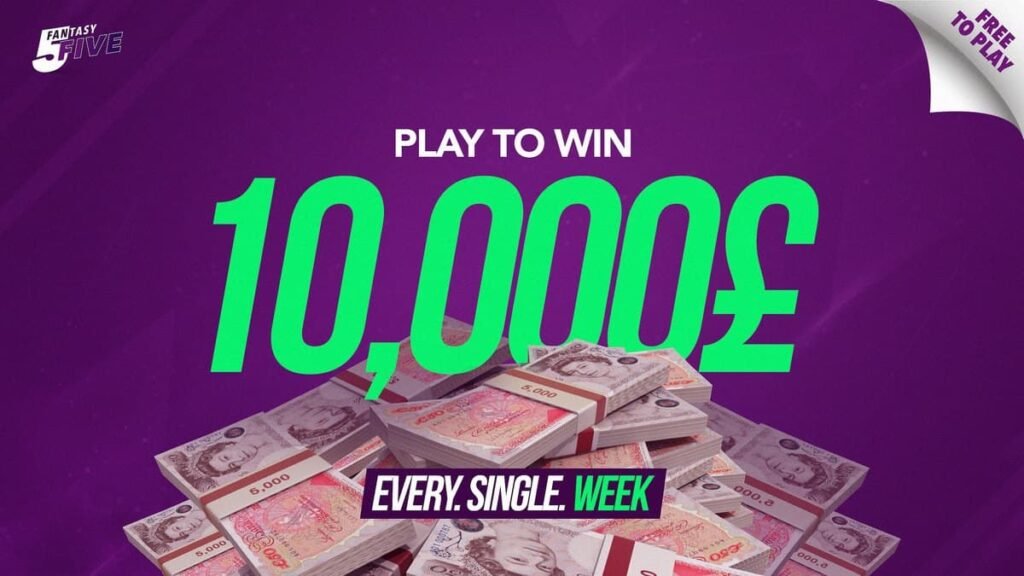 The midweek Gameweek 5 is done and we very quickly move onto the next lot of Premier League matches – which means yet another chance to win £10,000 for free!

We’re talking about the free-to-play weekly Fantasy5 game, where there is not just a £10k jackpot to be won from your Fantasy expertise but other prizes too.

It’s as simple as this: pick five players from the nominated Gameweek 6 matches below and, if they all exceed their ‘points targets’ (a par score set by Fantasy5 for each asset), you’ll be in the money:

We have selected our own picks for Gameweek 6, which can you can read below.

The deadline for this week’s entries is at 15:00 BST on Saturday 3 September.

Eight players defeated their points target during Gameweek 5, with the £10,000 unable to be won because no player succeeded during Bournemouth v Wolves.

All five of our picks were unsuccessful – what were we thinking, doubting that Erling Haaland wouldn’t score a second successive hat-trick!? He did, whilst Ilkay Gundogan (8.5), Raul Jimenez (6.5) and Andrew Robertson (7.5) all blanked.

So here’s who we’ve settled on this week…

Luis Sinisterra (6.5) arrived at Leeds with exciting reports based on his time at Feyenoord. As a Raphinha replacement, it was satisfying to see him score against Everton in his first start for the club and bring in ten Fantasy Premier League (FPL) points.

The next two picks play for the perceived underdogs, starting with West Ham’s Tomas Soucek (5.5). His midweek goal against Tottenham was certainly due, having totalled 1.05 expected goals (xG) up to Gameweek 4. He faces a leaky Chelsea defence that has conceded eight goals in four outings.

Spurs assets have been given high points targets at home to Fulham, such as Harry Kane (10.5), Dejan Kulusevski (8.5) and the out-of-form Son Heung-min (8.5). The Cottagers look a decent side too, with Bobby De Cordova-Reid (5.5) playing all 450 minutes so far and netting against Brentford in Gameweek 3.

Man City’s trip to Aston Villa comes just before a string of games against Sevilla, Spurs and Dortmund, so it’s fair to assume ‘Pep Roulette’ will take place at Villa Park. Joao Cancelo (7.5) is a more secure starter than most and was removed in the 68th minute on Wednesday night, with a clean sheet and goal to his name.

Finally, Bukayo Saka (7.5) is on three assists so far and long overdue overdue a goal. Arsenal get an extra day of rest than opponents Man United and are top of the league with five wins from five.