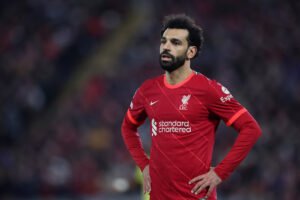 We wrap up our coverage of the weekend’s Fantasy Premier League (FPL) action and start looking ahead to Gameweek 7 in The Digest.

It’s been a slow start to the 2022/23 season for Mohamed Salah, having blanked in three of his first six Premier League appearances.

The Egyptian came agonisingly close to scoring on Saturday, when Jordan Pickford (£4.5m) touched his low drive onto the inside of the post deep into stoppage time.

However, that event sums up his season so far, because it isn’t quite happening for FPL’s most expensive player right now.

Indeed, two goals from the opening six matches represents Salah’s worst start to a Premier League campaign. For context, at the same stage a year ago, he had found the back of the net five times.

For most of Saturday’s Merseyside derby, Salah was stationed out on the right and largely on the periphery (see below), although Jurgen Klopp was quick to dismiss the idea that he is playing wider in his post-match interview.

Still, it does feel like Salah is adjusting to Liverpool’s new set-up, which now includes a more traditional number nine in Darwin Nunez (£8.9m).

Notably, Salah’s underlying goal threat stats are down. He is seeing an increase in creative metrics like key passes, but his appeal is based on goals, and scoring lots of them.

If he isn’t doing that regularly, he’s an expensive purchase, especially for those managers who are happy to auto-captain Erling Haaland (£12.0m).

Liverpool have been way short of their usual level so far this season, and it isn’t only Salah that has disappointed.

With Thiago (£5.2m) also out injured, the balance in midfield isn’t right, and tactically, it’s affecting the Egyptian.

That’s why the return to action of Thiago, who resumed full training on Monday, is so important, as he could play a key role in getting Salah back firing.

With Wolverhampton Wanderers up next in Gameweek 7, plus Champions League ties against Napoli and Ajax either side, owners of Salah fortunately now have three matches to scout his performances, before a big decision might need to be made ahead of Gameweek 8.

With five defeats in a row and a poor defence that has already conceded 16 goals, Leicester City are a team in trouble.

At the Amex on Sunday, the Foxes were well beaten by Brighton and Hove Albion 5-2.

Brendan Rodgers – wary of how much his side were struggling defensively – shifted to a back five formation at half-time, but it actually made them worse, which suggests their problems run deeper than personnel or tactics.

Having conceded again, they have now kept just one clean sheet in their last 29 Premier League matches.

As a result, Harry Kane suddenly looks like an excellent captaincy option, perhaps even the best, in Gameweek 8, when Leicester travel to Tottenham Hotspur.

For those eyeing up a Gameweek 9 Wildcard, a one-week punt on a Spurs attacker has suddenly got very interesting, especially with Salah visiting Stamford Bridge that week.

With four of the top-seven highest scorers in FPL so far being forwards, now might be the time to start pushing more of our budget up top.

Mitrovic, for example, has already scored six goals in as many matches and faces a really kind run of fixtures from Gameweek 8 right through until Gameweek 14.

Can we really afford to go without Mitrovic during that time, given that his ownership already sits at 24.9 per cent?

However, there are other forwards in the mix, too, including Darwin Nunez, Alexander Isak (£7.0m), Dominic Solanke (£5.7m) and Danny Welbeck (£6.5m), and that’s before we even get to Callum Wilson (£7.2m) and Patrick Bamford (£7.3m), both of whom could become options if they can overcome injuries.

A three up top formation hasn’t looked this appealing in FPL for a long time, which is a refreshing change after so many forwards struggled last year.