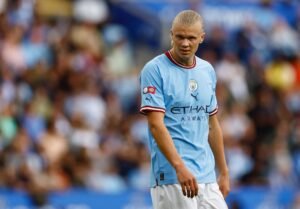 We’ve put together our Scout Picks ‘bus team’ ahead of Gameweek 7 of Fantasy Premier League (FPL).

Off we go again, then, with our early thoughts on the runners and riders up for selection in Gameweek 7, followed by the preliminary picks themselves.

At this early stage, there aren’t too many players who you would say are ‘nailed’ for Scout Picks duty in Gameweek 7.

For example, Manchester City take on Tottenham Hotspur at the Etihad on Saturday evening, so we could end up ignoring their assets, favouring those with kinder fixtures, bar Erling Haaland (£12.0m) of course.

The Norwegian became only the second player in Premier League history to reach 10 goals in six starts at Villa Park, and given that impact, it is almost impossible to leave him out, regardless of the opponent.

Trent Alexander-Arnold (£7.5m) hasn’t quite hit his 2021/22 levels so far this season, with his 58th-minute withdrawal at Goodison Park on Saturday frustrating for his 46.9 per cent ownership. Indeed, he is currently the second-most sold FPL defender ahead of Gameweek 7. However, he has already produced a whopping 17-point haul at Anfield this season and now faces a goal-shy Wolverhampton Wanderers outfit who have scored just three times in six matches. It’s also worth noting that Bruno Lage’s troops have allowed 75 crosses from their left-flank, more than any other side bar the Cherries.

Mohamed Salah’s (£13.0m) underlying stats may be down in some areas, but he has still produced five attacking returns in six starts. He almost added another against Everton on Saturday, too, only for his shot to strike the post late on. Had that gone in, it’s unlikely we’d be discussing his form, certainly not to the extent we are now. His wider positioning needs monitoring, but despite some concerns, it’s hard to leave the Egyptian out, especially if the influential Thiago (£5.2m) is ready to return.

Elsewhere, Brighton and Hove Albion defensive representation feels likely ahead of their trip to Bournemouth, with Robert Sanchez (£4.7m) or Lewis Dunk (£4.6m) the obvious candidates.

A home match with Everton could also see Gabriel Martinelli (£6.5m) and Gabriel Jesus (£8.1m) included. The latter has found the net just once in his last four Premier League outings, but with all 20 of his shots this season coming from inside the penalty area, it surely won’t be long before he adds to his tally.

Aaron Ramsdale (£4.9m) will be in the conversation for the goalkeeper spot, with opponents Everton ranked near the bottom of the table for goals scored, with just four in six matches. Arsenal have failed to keep a clean sheet in the absence of midfielder Thomas Partey (£4.9m), highlighting his importance to Mikel Arteta’s side, but he could potentially be back this weekend, which not only boosts the appeal of Ramsdale, but also defenders Gabriel (£5.1m), William Saliba (£4.8m) and Oleksandr Zinchenko (£5.1m) too.

Bukayo Saka (£7.8m), meanwhile, has produced a goal and two assists in his last three starts, but it seems unlikely he’ll be picked over Martinelli and Jesus.

A home fixture against Wolves could potentially see a Liverpool triple-up, but who joins Alexander-Arnold and Salah? That will depend on UEFA Champions League minutes/performances, but Luis Diaz (£8.2m) and Darwin Nunez (£8.9m) are the two names that immediately jump out. The latter’s 98.3 minutes per expected goal (xG) is only beaten by Haaland so far, with another six shots racked up against Merseyside rivals Everton in Gameweek 6

Chelsea were fortunate to beat West Ham United after a controversial late VAR call on Saturday, as they went a fifth-straight match without a clean sheet. This time, they will be up against the in-form Aleksandar Mitrovic (£6.8m), who has already scored six goals in as many matches. Still, Reece James’ (£6.0m) attacking potential could see him make the Scout Picks XI, while further forward, Raheem Sterling (£10.0m) will push for inclusion.

Two newly-promoted defences – Nottingham Forest and Bournemouth – could also be worth targeting in Gameweek 7. The pair have conceded 14 and 18 goals respectively so far this season and rank near the bottom in most of the underlying defensive metrics. That means attacking coverage from their opponents, Leeds United and Brighton, is highly likely.

As for Bamford, the forward transformed Leeds’ attack at half-time v Brentford, with his ability to hold the ball up and bring others into play notable. In his 45-minute run-out, he missed two big chances, but with another weeks’ training, should be sharper by the time Forest visit on Monday.

An away match at West Ham United certainly isn’t straightforward for Newcastle United, but Eddie Howe’s side are now on a run of three clean sheets in six matches. That promotes Kieran Trippier (£5.2m) in our thinking, who has climbed to second in the defenders’ list, with his total of six chances created against Crystal Palace the highest of any player in Gameweek 6.

Following Sunday’s 3-1 win over Arsenal, Manchester United have won four matches in a row. Now, they face a Crystal Palace side that has uncharacteristically conceded more big chances (20) than any other side so far. That raises the appeal of Bruno Fernandes (£9.8m), Marcus Rashford (£6.5m), Jadon Sancho (£7.3m) and Christian Eriksen (£6.3m), but will it be enough to see one of their assets included in the Scout Picks XI?

There are plenty more options besides those mentioned above, but they aren’t entirely convincing.

For example, Illan Meslier (£4.5m) and David Raya (£4.5m) are alternative ‘keeper options and have nice fixtures, but both represent teams at the wrong end of the table for actuals goals conceded and expected goals conceded (xGC), making them tricky picks.

Indeed, Jesse March will be concerned by his team’s defensive openness at Brentford, having allowed 2.59 xG.

That leaves Che Adams (£6.4m) and Brennan Johnson (£5.9m), who face Brentford and Leeds respectively, but other forwards are ahead of them at the time of writing.