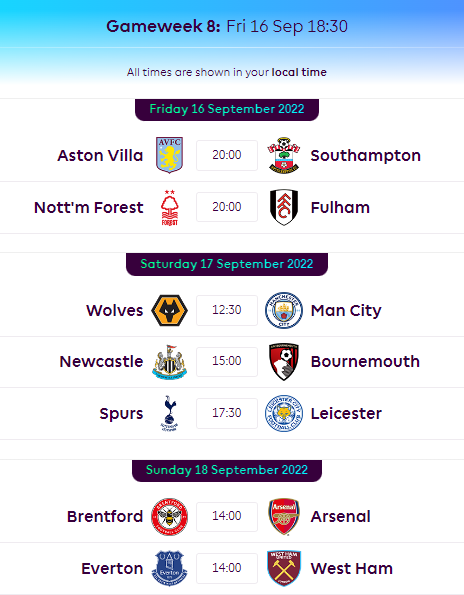 As feared, two further fixtures – Manchester United v Leeds United and Chelsea v Liverpool – have been postponed because of policing resources needed in London for the funeral of Queen Elizabeth II, which takes place next Monday.

Brighton and Hove Albion v Crystal Palace also remains off, despite the train strike that precipitated the postponement now being cancelled.

The revised Gameweek 8 schedule now looks like this (UK dates/times are listed):

WHAT DOES IT MEAN FOR FPL MANAGERS? INITIAL REACTION

After an opening month in which there was plenty of ‘template’ tedium and thinly veiled humble brags from FPL managers burning transfers because their squads were apparently unimprovable, we’ve now got some welcome chaos.

It’s not quite the full-on bedlam many of us had feared/hoped for, however, as there had been initial suggestions that all three London-based fixtures would be called off. That scenario would have left many of us well short of a full starting XI and prompted a lot more discussion about Wildcards and Free Hits.

As it turns out, most of us may be able to get to an 11-strong line-up without much fuss – although the lack of a fixture for Liverpool, Chelsea and Brighton in particular may be the Buckaroo moment for those FPL managers hovering over the Wildcard button.

We’ll be exploring the pros and cons of a Gameweek 8 Wildcard in a follow-up piece.