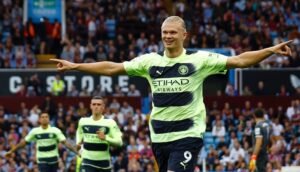 It’s official: Fantasy Premier League (FPL) will return this week after the Premier League confirmed on Monday that Gameweek 8 will go ahead, albeit with a few postponements thrown in for good measure.

We’ll have a smaller pool of players to choose from when we put together our weekly Scout Picks, then, with no Chelsea, Liverpool, Manchester United, Leeds United, Brighton and Hove Albion or Crystal Palace assets in action.

In this early selection, we select a first draft of our regular picks before they are finalised and published much closer to the deadline.

The final Scout Picks cement our weekly selection on Friday but this ‘bus team’ article – a term coined by the Always Cheating chaps – will discuss the players who are likely to be in the running.

Even if we had a full complement of players and teams at our disposal, and acknowledging the fact that Wolverhampton Wanderers have conceded fewer goals (four) than any other Premier League club this season, only injury can keep Erling Haaland (£12.0m) out of the Scout Picks at present.

Assuming John Carew’s crown as the Premier League’s resident big Norwegian, Haaland has hit the ground running with 10 goals in his first six appearances. Comfortably clear of any other player for both ‘big chances’ and expected goal involvement (xGI), he currently leads our captaincy poll with 56.76 per cent of the vote.

Teammate Joao Cancelo (£7.1m) also looks sure of inclusion in Gameweek 8, with goal-shy Wolves finding the net just three times in their opening six matches. The Portuguese playmaker is averaging 5.5 points per start and has already racked up two attacking returns (one goal, one assist), four bonus and three clean sheets.

Having started the season in fine form by scoring five goals in Tottenham Hotspur’s first six Premier League matches, Harry Kane (£11.4m) continues to underline why he’s one of the best assets in FPL. Spurs – who are unbeaten and sit just one point off the top of the table – now face a Leicester City side that have lost five matches in a row. The Foxes’ away record also offers encouragement for those backing Kane and Son Heung-min (£11.7m), having conceded 23 goals in their last 10 Premier League away matches, extending back to last season.

As for Newcastle United, the initial thought is towards a defensive double-up: Bournemouth rank bottom for goal attempts, shots in the box, efforts on target and ‘big chances’ this season, although they did perk up recently with three goals at Nottingham Forest, albeit from just 0.78 expected goals (xG).

Nick Pope (£5.1m) and Kieran Trippier (£5.3m) arguably carry the most points potential at the back, with the pair averaging 6.0 and 5.0 points per match respectively. The former, meanwhile, has made the most saves of any ‘keeper this season with 28, nine of which came in his last outing at home to Crystal Palace. The in-form Geordies have kept three clean sheets and conceded just six goals in their six matches so far, despite facing Man City and Liverpool, so cheap enabler Fabian Schar (£4.7m) also merits a mention.

As for Aleksandar Mitrovic (£6.9m), the forward has scored six goals in as many games for Fulham since promotion and is already ahead of his xG figure despite missing a late penalty at Wolves earlier in the campaign. Now, he faces a Nottingham Forest outfit that have allowed more shots than any other side and sit bottom for expected goals conceded (xGC).

Returning to Man City, Kevin De Bruyne (£12.2m) is in the running, with one goal and four assists in five starts, but Phil Foden (£8.0m) is a cut-price alternative and certainly worth a shout, too: he’s already managed four attacking returns (one goal, three assists) himself and is also on some set-pieces. Ederson (£5.5m), meanwhile, ought to be in the conversation for a ‘keeper spot, with Wolves not renowned for their goalscoring exploits, as discussed above.

Should we get any line-up tip-offs, Ivan Perisic (£5.6m) could potentially become one of the best defender picks in Gameweek 8, having created eight chances in just 293 minutes of action. If not Eric Dier (£5.0m), Cristian Romero (£4.9m) or Emerson Royal (£5.1m) could all potentially step in, and arrive with slightly cheaper price tags.

Representation from Arsenal also looks on the cards. Gabriel Jesus (£8.1m) and Gabriel Martinelli (£6.5m) have both made excellent starts to the new Premier League season and have played a key role in Mikel Arteta’s side winning five out of their six games so far. Bukayo Saka (£7.8m) is getting better and better, too, so there is plenty to mull over ahead of Friday’s deadline, with all three Gunners attackers in the mix.

Another mid-price midfielder seems likely, too, but who? An injury update would be welcome on Allan Saint-Maximin (£6.4m), while James Ward-Prowse (£6.5m) will be pushing for inclusion if he fails to make it in time.

Further forward, Alexander Isak (£7.0m) has hit the ground running at Newcastle, scoring on his debut at Anfield, before another decent performance in the goalless draw with Crystal Palace. Across those two starts, the young forward has produced five goal attempts, four shots in the box, three big chances and 1.26 non-penalty xG. It’s still early days but Isak looks a real talent, and he could yet sneak into the Scout Picks XI for the first time.

Solid budget options like Vladimir Coufal (£4.4m), Kurt Zouma (£4.5m) and James Tarkowski (£4.4m) offer security of starts, in what might be a low-scoring affair at Goodison Park. Indeed, Everton and West Ham United have managed just seven goals between them so far this season.

However, Jarrod Bowen (£8.1m) still feels like a reasonable differential shout, given that he might be on penalties, while Anthony Gordon (£5.5m) has been the Toffees’ chief goal threat so far. If we do decide to back either attack, we’ll almost certainly turn to one of those two options.

Gabriel Magalhaes (£5.1m), Oleksandr Zinchenko (£5.1m) or William Saliba (£4.8m) at Arsenal could emerge as defensive options, but it does feel like others are ahead of them right now.

Saying that, the influential Thomas Partey (£4.8m) is now back in full training, which boosts their clean sheet potential.

Elsewhere, Lucas Digne (£4.7m) could come under consideration at the back, although Ward-Prowse’s deliveries from dead-ball situations could cause problems, an area where Aston Villa have struggled numerous times this season.

Despite good performances against Man City in Gameweek 6, it’ll be a tough ask for Leon Bailey (£4.7m) or Ollie Watkins (£7.3m) to force their way into the Scout Picks XI, the same of which can be said for Nottingham Forest attackers Morgan Gibbs-White (£5.5m) and Brennan Johnson (£5.9m).