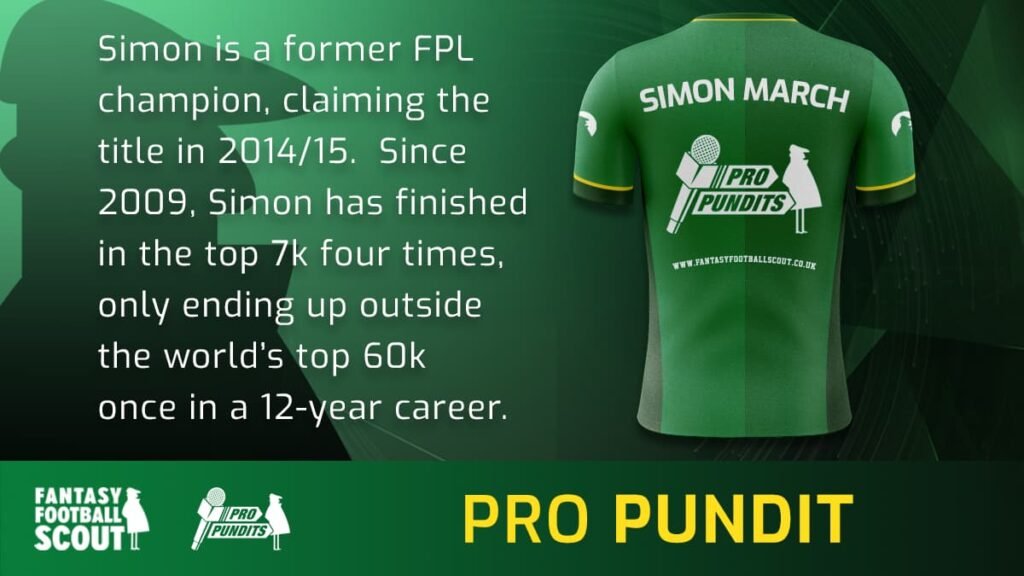 Our team of Pro Pundits, Hall of Famers and guest contributors offer their Fantasy Premier League (FPL) insight, tips and advice throughout the season, with only Premium Members able to access every single article they write.

Here, former FPL champion Simon March urges some caution about focusing too much on Blank Gameweek 8.

How to Avoid Over-Investing in Blank Gameweeks

Mark Cuban, the billionaire owner of the Dallas Mavericks NBA team and the guy who brought you ‘radio on the internet’, once said: “Don’t spend billions to make millions”. In other words, don’t invest more into something than that something is worth. The insight seems obvious but it’s a mistake that we often make more than we realise, particularly when it comes to FPL and especially when we’re approaching a Blank Gameweek.

This article will look at the pitfalls of over-investing and discuss how we might avoid it going into blank Gameweek 8 and beyond.

The concept of getting value for money goes right to the very heart of FPL. At its core, the object of the entire game is to get as much value as possible from the budget that we have available. Consequently, we tend to like players like Fulham’s Aleksandar Mitrovic (£6.9m) who has so far delivered 5.7 points per million (PPM) and we’re prone to question the value of the likes of Liverpool’s Mohamed Salah (£12.9m) who has so far delivered just 2.9 PPM, even though the players’ total scores are almost identical (39 and 38 respectively).

Salah, at present, is a manifest example of ‘spending billions to make millions’. He is, by definition right now, not worth the money and that is definitely something worth thinking about when we look at building for the next few Gameweeks.

But to view Salah, or any player who is currently underperforming their price tag in these terms is to ignore some important context. Salah is priced as he is because he plays for one of the best teams in the league and because he has averaged 258 points per season over the past five years. By any measure, Salah is as close to a ‘sure bet’ as there is in FPL; he is ‘reassuringly expensive’ as they say. He is the ‘government-backed bond’ to Mitrovic’s ‘emerging altcoin’; your return on investment might not be as dramatic, but you can feel reasonably assured about what you’re getting, and that you are less likely to go bankrupt.

So, while the ‘don’t spend billions to make millions’ concept makes a lot of sense, there are also times when millions will do, just so long as you can rely on them.

But the concept might also be considered prescient when it comes to approaching Blank Gameweeks, as we currently are with only the seven fixtures remaining in Gameweek 8. Nobody is in quite the same boat when it comes to this Gameweek and some will be much more affected by the cancellations than others. Few of us will have eleven players ready to play, some may not even have half that.

But whatever our circumstances, how we react is always key. It’s easy heading into Blank Gameweeks (especially ones that we could not have foreseen) and over-invest in what we believe might be the solution. Many will be considering hits, Free Hits, even Wildcards and, while any of these might indeed be the best strategy given your individual circumstances, we all have to be careful not to throw the kitchen sink at the problem just so we can potentially score a few more points than we otherwise might have.

Secondly, how well you do in Gameweek 8 is less likely to be a reflection of how many players you have playing but rather which players you have playing. The most obvious ‘danger men’ are not hard to spot; Spurs’ Harry Kane (£11.4m) at home to Leicester City, Man City’s Erling Haaland (£12.0m), Joao Cancelo (£7.1m) and Kevin De Bruyne (£12.2m) away to Wolves, Fulham’s Aleksandar Mitrovic (£6.9m) away to Nottingham Forest and, potentially, Arsenal’s Gabriel Jesus (£8.1m) and Gabriel Martinelli (£6.5m) away to Brentford.

All of these players are highly owned (there’s a good chance you have at least a few of them already) and all are capable of posting big scores in these relatively favourable fixtures. Beyond those highlighted, there will definitely be some big scores by some lesser-owned players, but this is the case every Gameweek, you can never have them all. If you have decent coverage of the big hitters for Gameweek 8, it is unlikely to be a disaster for you, whether you have five players or a full starting XI.

Most important of all to remember is that Gameweek 8 is just one Gameweek out of 38. There is a limit to both what you can achieve and how badly it can go for you. It might not seem like it at the time, but win or lose, Gameweek 8 will not define your season, so be wary of investing in it like it will.

If you do use your Wildcard or take points hits, consider whether your actions will also benefit you in the long term and, if not, maybe they are better saved for a time they can have more of an impact. If you use your Free Hit now, remember that there will be Double Gameweeks to come when using it might yield you more points and that other managers will be saving theirs for then. Be wary of sacrificing a potentially bigger opportunity later on in order to take advantage of a relatively small opportunity now. Again, ‘don’t spend billions to make millions’.