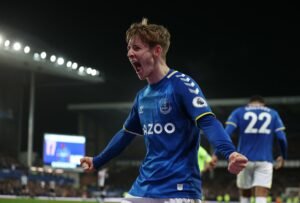 Gameweek 8 of Fantasy Premier League (FPL) is almost upon us, which gives us an opportunity to have a look at some more differential options.

This time, we’ve selected low-owned picks at Everton, Bournemouth and West Ham United, who we think have the potential to make an impact.

The winger is only 21, but both of those goals gained Everton a point, highlighting exactly why Frank Lampard was so keen to keep him at Goodison Park in the summer.

His underlying stats, meanwhile, suggest there is more to come.

Indeed, Gordon ranks third in his position for goal attempts (18), joint-fifth for shots in the box (13) and top for efforts on target (13), as he looks to improve his goalscoring record, something he said he was aiming for in pre-season.

Now, with Dominic Calvert-Lewin (£7.9m) set to return to the fold following injury, plus the addition of Neal Maupay (£6.1m), we should see Gordon take up a wider role, which could potentially see him create more opportunities for his teammates.

Across the opening six matches, he has created just six chances which carried an expected assists (xA) value of 0.34. However, he posted team-leading totals in both metrics during the second half of 2021/22, so we should see improvement.

Everton are still looking for their first Premier League win of the season, but have drawn their last four matches, and now face a West Ham United side that will be in Europa Conference League action on Thursday. The Hammers also rank bottom for chances conceded from their left flank and 18th from the right, so there is potential for the Toffees’ wingers to thrive.

Gordon is clearly a crucial player for Everton and could offer real value for Fantasy managers on the lookout for a cheap midfielder.

Dominic Solanke (£5.7m) scored and grabbed an assist in the 3-2 win over Nottingham Forest in Gameweek 6, in just his third Premier League start of the season.

After finding themselves two-nil down at half-time, Bournemouth re-emerged after the break with a three-at-the-back system, with Ryan Fredericks (£4.4m) replacing Jordan Zemura (£4.4m) and Adam Smith (£4.4m) tucking inside to become a third centre-half. That allowed the Cherries’ wing-backs to stay wide and push high up the pitch, which proved to be the catalyst for the forward’s improved second-half showing.

“He’s a dream. As a centre-forward, I think sometimes his work can go unnoticed because it’s difficult to score goals at this level. But I’m so pleased he got his goal because you ask him to press, he presses, you ask him to do stuff in possession. He does it, he literally does everything he can. Probably the hardest working centre-forward I’ve ever seen. I’m delighted that he gets to put a goal on the end of it, because he deserves it.” – Gary O’Neil on Dominic Solanke after the 3-2 win over Nottingham Forest in Gameweek 6

Now, Solanke is about to embark on a really kind run of fixtures. In fact, between Gameweeks 8-16, which is when we pause for the winter World Cup, Bournemouth sit top of our Season Ticker for fixture difficulty. He could, therefore, be a cheap ‘set-and-forget’ forward, which could perhaps allow upgrades in other areas.

Solanke does have pedigree, too, albeit at a lower level. For example, in 2021/22, he netted a very impressive 29 Championship goals as Bournemouth finished runners-up and won promotion. That suggests he can continue ticking over, and perhaps offer value as a cheap forward offering regular starts.

Tomas Soucek (£5.4m) has been an integral part of West Ham United’s midfield since joining – initially on loan – from Slavia Prague.

In his first full season at the club, the 27-year-old netted 10 Premier League goals and was a constant threat in the opposition box, especially from set-pieces.

His performances have dropped slightly since then, as he managed just five goals in the top-flight last term. However, he has already scored in both the Premier League and Europa Conference League in 2022/23 and could potentially add to his tally in Gameweek 8.

That’s because Sunday’s opponents, Everton, rank bottom for headed goal attempts conceded this season, with 24. As a result, David Moyes will surely target that area of weakness, given Soucek’s aerial ability. Indeed, the Czech international has already racked up five headed attempts in 2022/23 – no FPL midfielder has managed more.

After that, West Ham face an appealing run right through until the World Cup break, a period which sees them face Wolverhampton Wanderers, Fulham, Southampton, Bournemouth, Crystal Palace and Leicester City.

Soucek experienced a dip in form last season but is showing signs that he can return to his top level. That suggests he can be an effective differential in Gameweek 8 against an Everton side that will be without the influential Jordan Pickford (£4.5m).