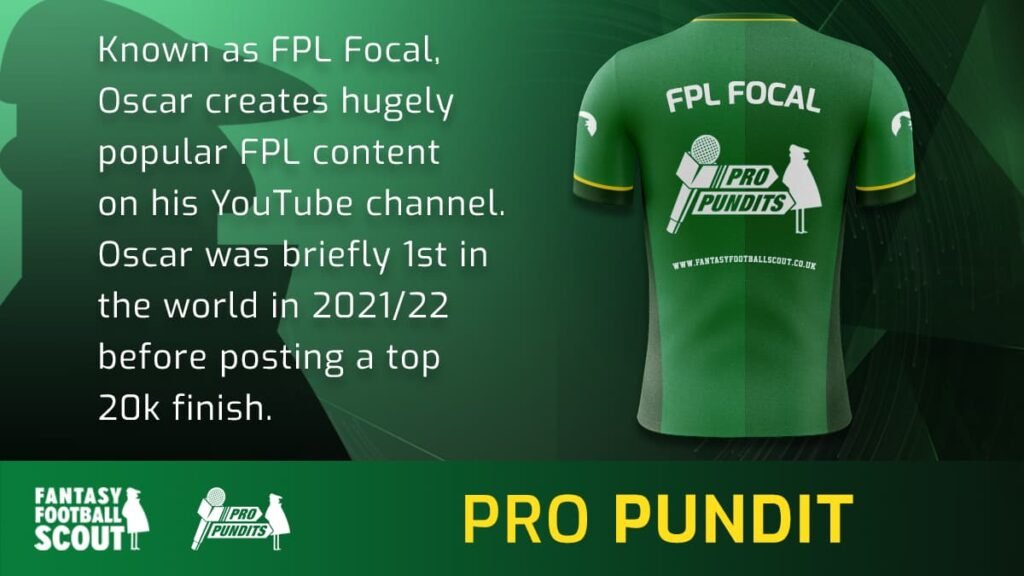 Starting off with the goalscorer odds and Erling Haaland (£12.0m) is top, given a 53% chance of scoring any time in Gameweek 8. Remarkably, barring the Community Shield before the season kicked off, he’s yet to blank in any fixture in any competition since his summer move to England, producing 13 goals and one assist in eight games. He’s comfortably top in the league for non-penalty expected goals (xG), with 5.61, second being Harry Kane (£11.4m) on 3.46.

Speaking of Kane, he’s second in the goalscorer odds, given a 45% chance of scoring any time on Saturday. Tottenham Hotspur are at home to Leicester City, who are yet to keep a clean sheet this season and who are third worst for expected goals conceded (xGC) among all teams with 10.71.

Alexander Isak (£7.0m) and Aleksandar Mitrovic (£6.9m) are tied at a 38.5% chance of scoring and are a very popular duo for those on a Wildcard. Kane has the better odds and an impressive record versus Leicester, with 17 goals and three assists in 14 appearances. However, for many, he blocks the likes of Isak, Mitrovic or Ivan Toney (£7.2m) on a Wildcard, so his inclusion may be a difficult decision for prospective owners.

READ MORE: Enter the free-to-play Sorare Academy game before the 11am deadline on Friday!

We appear to be seeing the start of a Gabriel Jesus (£8.1m) mass sale in favour of the aforementioned strikers, though he’s still well up there in the Gameweek 8 goalscorer odds with a 36% chance against Brentford.

It’s been an underwhelming start to the season for Son Heung-min (£11.7m), with just an assist in six games, but the bookies have given him a 35.5% chance of scoring against Leicester. If you’re looking for a one-week punt before a Gameweek 9 Wildcard, he could be the answer – albeit a risky one.

Alternatively, Kevin De Bruyne (£12.2m) is another to consider particularly if you’re selling Mohamed Salah (£12.9m); the Belgian is given a 28.5% chance of scoring against Wolves. In the same fixture last season, he netted four times, though his role won’t be exactly the same in this fixture with Haaland leading the line.

Onto the clean sheet odds and top this Gameweek are Newcastle United, with a 47% chance of shutting out Bournemouth. Newcastle have kept three clean sheets so far this season, which is the joint-most in the division, and Bournemouth are rock bottom for xG on 2.53 – the next highest being Villa, who are on more than double that. Nick Pope (£5.2m) and Kieran Trippier (£5.3m) are both excellent picks.

Manchester City are second in the clean sheet odds race with a 45% chance against Wolverhampton Wanderers, who have also struggled for goals, scoring the joint-fewest with three.

Spurs are third in the above list, though it’s tough to predict whether Ivan Perisic (£5.6m) gets the nod in this game. Ryan Sessegnon (£4.5m) may return to the starting XI after a disappointing Spurs loss in the Champions League in midweek, so Eric Dier (£5.0m) is perhaps the best pick right now if you’re purely looking for assured minutes.

It’s the last good fixture for Arsenal for a while, with the Gunners deemed to have a 31.5% chance of a clean sheet against Brentford. After the break, they face Spurs, Liverpool and Leeds United and then blank in Gameweek 12. Thomas Partey (£4.8m) is back in training, at least, and that will be a massive boost if he’s back in the starting XI. In the opening three Gameweeks, Arsenal registered two clean sheets; in the games while he was injured, they kept none. This was a trend we observed last season, too, as the Gunners somewhat collapsed in part due to his injury at the end of the season.

Danny Ward (£4.0m) owners beware: Leicester are second bottom with an 11.5% chance of a clean sheet. He’s been generally poor and you wonder at what point Brendan Rodgers gives Daniel Iversen (£3.9m) an opportunity, if at all. Rock bottom this Gameweek are Wolves for their home fixture against Man City, with a 10.5% chance of a shut-out.

GAMEWEEK 8: MOST TRANSFERS IN

Trippier is the most transferred-in player this Gameweek with over 400,000 managers picking him up (as of Thursday). We’ve talked on past videos about how Bournemouth have conceded more than twice as many crosses down Trippier’s side, and he’s on direct free-kicks too.

His teammate Pope is second, followed by De Bruyne. With Salah and Trent Alexander-Arnold (£7.5m) out of the equation on a Wildcard, there’s more money to dabble with, and there’s a question as to whether the “threemium” could be the way to go. It’s very possible to fit Kane, Haaland and De Bruyne in one draft, which looks very strong for the next four Gameweeks, and then when Man City blank, there’s the opportunity to switch back to Salah.

Another lesson in patience: around 150,000 managers picked up Marcus Rashford (£6.6m) over the last seven days but he now blanks in Gameweek 8 with the Leeds fixture postponed and is carrying a muscle injury. It’s been a week of uncertainty but besides events surrounding the Queen’s death, it’s always sensible, if possible, to hold your transfers until after European matches have been played. We must remember that Arsenal, Chelsea, Liverpool, Man City, Man Utd, Spurs and West Ham all have European commitments in 2022/23, and many of us have got players from most of these teams.

Jarrod Bowen (£8.1m) has snuck into the top 10 most transferred in players; with West Ham’s fixtures turning favourable, he’s appearing in many Wildcard drafts. You wonder whether he’s worth £8.1m considering he is yet to return in six games, though the fixtures could be enough for a turn in form. The likes of James Maddison (£7.9m) and Wilfried Zaha (£7.2m) are worth consideration on the Wildcard over Bowen, and it’s not the end of the world if you need to play someone like Andreas Pereira (£4.6m) or Leon Bailey (£4.7m) over Zaha while Palace blank this weekend.

GAMEWEEK 8: MOST TRANSFERS OUT

The most transferred out players this week are largely assets who are blanking, so we won’t dwell on them for long. It’s Salah who is top, with over half a million sales. We saw De Bruyne third on the most transferred-in table and he is the logical replacement, particularly if you plan to Wildcard in Gameweek 9.

Reece James (£6.0m) is a surprising name to see: although he blanks in Gameweek 8, Chelsea have arguably the best run of fixtures from Gameweek 9 to the World Cup. Again, if you plan to Wildcard over the international break between Gameweeks 8 and 9, then the Trippier transfer is a very sensible move. Graham Potter went with a wing-back system in his first game in charge of Chelsea in the Champions League, with Raheem Sterling (£10.0m) interestingly deployed at left wing-back on the opposite flank to James. Both players were very advanced, so the early impressions are that James will remain an excellent option under his new boss.

That wraps up this episode of The Preview, thanks for reading!