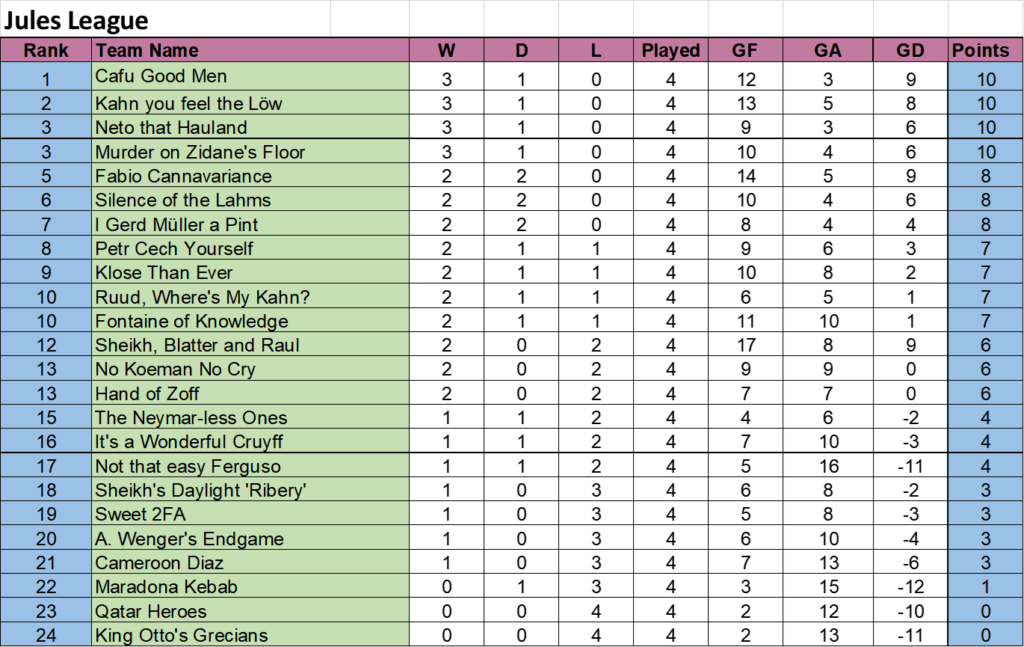 Matchday four of the SKLW tournament seems a lifetime ago now. The death of Her Majesty Queen Elizabeth II has completely enveloped the public conscience and caused the postponement of all football in the UK last weekend.

The knock-on effect is still being felt this weekend as only seven of the original ten GW8 fixtures are being played, but the tournament returns with aplomb. As for the cancelled GW7, it is likely FPL will add those fixtures as a DGW down the line, so to compensate we will play an extra matchday during one of the midweek Gameweeks we had pencilled in for a break. More will be revealed in due course.

Firstly, let’s take a look at some results!

Sweet 2FA may as well have called themselves 3FA this week as the added layer of security of keeper FPL Shake n Bake ensured the Heroes’ strikers never got a sniff and thus picked up their first points of the season.

There were certainly no tears in the Koeman camp this week after giving the Cameroons a good thrashing. After two wins on the bounce with the same keeper-strikers combo, will manager Lexx Katz dare change his star-studded trio as they go for a hat-trick?

The Müllers had to murder a point this week instead as they shared the spoils in a game that can only be described as … Klose.

The Fabio certainly felt the full force of variance last week, with both strikers comfortably scoring but some shocking scores amongst their squad allowing the Cafus to sneak a draw.

Ironically, despite the lack of Haaland on his Wildcard being well-documented, the Netos’ Mark Sutherns founded a haul from somewhere has his high score helped leave his team’s opponents win-less this week.

Silence of the Lahms 2 – 2 It’s A Wonderful Cruyff

The Lahms were all ready to make a lot of noise this week as their superior squad score had them up in the tie … before late phantom goals from BrendanBone and Schmarn dragged the Cruyffs to a draw.

This war could have gone on for infinity with the way keepers Jigar Doshi and Simonsaysfpl were going, but What’s The Mata and Whitters_2014’s scores of 63 and 61 respectively was a knife to the heart of the Wengers.

It was a fountain of points for the Fontaines as they bagged a total of six goals to leave their sheikhy opponents blattered. The good news for the Sheikhs is that their perfect yo-yo streak shows no sign of slowing down, so their next game should be a guaranteed win.

Shakespeare himself would have been proud of the irony on show in this tie. The Cechs robbed the robbers blind despite a fairly hefty deficit in squad score as FFS supremo Tom Freeman was left Ceching himself, or rather the back of his net for the ball, after a desperate performance between the sticks.

After keeping it tight in the H2Hs, the Maradoners were put to the sword as their points were dulled by the impressive Ruuds.

The winless Grecians must be losing their marbles after yet another loss, leaving them rooted to the bottom of the Jules league. Even Fabio Borges couldn’t rescue his side, fluffing his lines badly in front of goal with the worst score of the entire team.

There will be plenty of love in the Kahn pride lands tonight as the picked the bones of the Zoffs. Maybe Hand of Taibi would have been a better name as both Kahn strikers were allowed to score past keeper FPLSpartan.

Cafu Good Men keep their spot at the top on Goal Difference after dropping their first points of the campaign. They are joined on 10 points by three other team. At the bottom end, Qatar Heroes and King Otto’s Grecians are rooted to the foot of the table and pointless so far.

The Hamsters once again tunnelled their way to a narrow victory and silenced the horns of their opponents thanks to a slightly higher squad score. Rumour has it that Greyhead is burning the midnight oil working on his spell to sow discontent in the Hamster camp…

While the inevitable Balon d’Or winner is in for a service after hobbling off injured in the Champions League last week, his team continue to turn up the gas and leave their opponents in the dust. All while benching their highest score; talk about a victory lap!

Have you ever watched a nature documentary and wondered who would win in a fight between a GOAT and a marsupial? Now we know. The Bandicoots were left in a spin as the Ronaldos completed a clean sweep of goal, clean sheet and squad victory.

A strong showing from the Bafanas left their opponents in a whirlwind of despair as they stormed to the top of the league.

The only thing the Shelby’s are peak-ing at right now is the bottom of the tables as they fell to defeat against Chaballer’s Britneys, who amazingly are still a cohesive dressing room despite the totalitarian regime. As with all burgers, it’ll fall apart eventually… [EDIT – Kriddles, prepare for a ‘Royale’ beating, we’ll drown you in mayonnaise!!!]

A comfortable victory for the Weahs, who didn’t even need an elaborate escape plan to pull off this heist. Their opposition were too busy being stuck at home being forced to watch Bridgerton with eyes firmly on the screen.

It’s a shame there weren’t two more goals to the away side so this summary could write itself, but alas, that will have to wait. At least after this result, there will be plenty of Gentleman’s Grealish to go around.

The most unbelievable aspect of this match was that the Geoffs still pulled off the win despite benching their two highest scorers. Could captain Pirlo’s Pen pull off a smugger “That’s all, folks!” if he tried?

Unfortunately, the Vikings were lost at sea this week as they were put to the … axe(?) by the Terror of Tyneside. Meanwhile, things are looking rosier for the Flowers after a shaky start.

The Baggios have pulled their trousers up after a slow start, with two wins on the bounce and they are rising like that penalty in ’94! After an opening day loss by just two squad points, the Baggios were on the reverse side of the same result this time around.

The Fangs were toothless this week, not able to muster a single goal as they were snuffed out by the Gauchos’ keeper Mina Imnida who won the tie after a strong performance from the squad.

The Klins-men’s espionage tactics paid off as they exploited the weakness of the Discos’ goalkeeper to score two goals, but their opponents surprisingly remained calm under pressure to tie it up with their squad.

Banyana – Bafana dance their way to the top of their league table with three straight wins, but no fewer than six teams are hot on their heels. Shelby Company Limited and the Sevens are still without points and need to start reversing their fortunes before it’s too late.

Top scorer of the week was Ramdani_dicky from Pasukan Kesiangan with a score of 79!

There is an eight-way tie for top scoring strikers with three each, while Umberto from I Gerd Müller a Pint has six clean sheets, closely followed by PG from Cafu Good Men with 5.

MD5 was originally set to take place in GW7, but of course with the postponement of all games this wasn’t possible. Therefore, MD5 will take place in GW8 and we will make up the week lost later in the year, during one of the midweek rounds we’d pencilled in as a break.

Boris and Greyhead continue their quest for glitch-free live streaming, and their next one will be live at 6pm Wednesday 21st September and can be seen here.

Thanks for reading, and good luck to all!