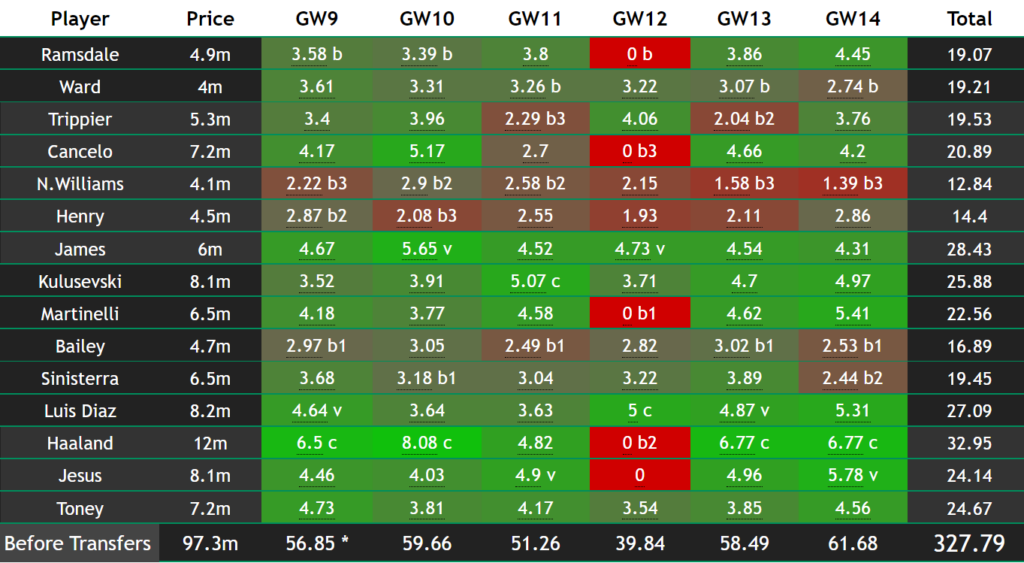 Looking to see how many points your Fantasy Premier League (FPL) team will score from now until the World Cup? Comparing Wildcard drafts? Stuck between two transfer targets? Our Rate My Team (RMT) tool is here to help!

RMT’s points projections for Gameweek 9 of FPL and beyond are provisionally available now.

These figures will be fine-tuned closer to the deadline after the pre-match press conferences have taken place, while ‘expected minutes’ will also be adjusted accordingly when we see how much game-time players rack up over the international break and how late they return from across the globe.

Erling Haaland (£12.0m) is, unsurprisingly, the predicted top scorer of Gameweek 9 at present but a blank for Manchester City in Gameweek 12 sees Mohamed Salah (£12.9m) rise to the summit over the medium term.

Premium Members of Fantasy Football Scout can see the players heading the points projections for both this upcoming Gameweek and the next eight in the images below but you can get the full picture here.

Our Rate My Team tool, meanwhile, can give you an approximation of how many FPL points your own team will score over a series of Gameweeks.

WHY DOES RMT SAY TO CAPTAIN A PLAYER WITH A LOWER PREDICTED SCORE THAN A SECOND PLAYER?

We know, as Fantasy managers, that we have a vice-captain who will sub in if our captain doesn’t play.

So sometimes we might captain a player who may not feature knowing that our vice will assume the armband if that happens. But we choose to captain him because if he does play, he is likely to get the most points.

The same applies when selecting our starting XI and bench; we might start a player who is unlikely to feature but – if he does – is expected to do well. Safe in the knowledge that he will be replaced by a sub should he miss out.

The RMT understands this. In fact, it produces two sets of numbers:

The adjP score is the one described above and should/can be used for selecting captain and starting XI. It basically says if a player features in the match, how many points is he likely to get?

That player could still be a sub and get a yellow card, that possibility is included, the difference is it excludes zero minutes of playing time.

So essentially you would use the first set of numbers for transfers and the ‘adjP’ for captain and bench.