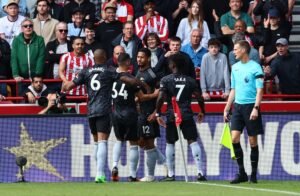 We’ve already brought you the statistical summary of Sunday’s Gameweek 8 action but now we turn our attention to the wider Fantasy Premier League (FPL) talking points from the day’s fixtures.

The numbers you see in this article are from our Premium Members area, where you can access Opta player and team data for every single Premier League fixture.

Arsenal returned to the top of the Premier League table after a 3-0 win at Brentford, with William Saliba (£4.8m) and Gabriel Jesus (£8.1m) among the goalscorers.

Fabio Vieira (£5.7m), making his first Premier League start in the absence of the injured Martin Odegaard (£6.5m), capped off the victory, which saw Mikel Arteta’s side dominate from start to finish.

Earlier, the impressive Saliba had opened the scoring with a glancing header from a Bukayo Saka (£7.8m) corner, the first of two assists for the winger.

That means the Frenchman is not only the top-scoring defender in FPL, but also the best value for money, producing 9.2 points per million spent.

However, it’s worth noting that Saliba’s two goals in 2022/23 have arrived from just three shots, compared to Gabriel Magalhaes’ (£5.1m) nine.

As for Arsenal, they have now scored five set-play goals this season, whilst also generating the highest expected goals (xG) total from set-play situations:

At Brentford, the Brazilian racked up another four shots in the box, although his late booking was his fourth yellow card of the campaign, as he edges closer to a one-match ban.

The win puts Arsenal on 18 points, before their next match against Tottenham Hotspur in the north London derby after the international break.

“Oleksandr Zinchenko and Martin Odegaard are both injured and not available for the game. I don’t know [how long they are out for], there are two different things but we don’t know yet.” – Mikel Arteta

For Brentford, they were unbeaten in their previous three games before today and could have climbed to fifth in the table with a win.

However, it was a complete off day for them, with Ivan Toney (£7.2m) isolated and not offering much in the final-third, largely because of how well Saliba and Gabriel marshalled him at the back.

“I always hate losing, but it was a well-deserved defeat, I can’t argue with that.  We lost to first in the table and they also performed like the No.1. I think they’ve been brilliant. If we want to play and beat a team like Arsenal in their current form, a title contender from my perspective, then we need to hit a 10/10. The big plus is that they scored two goals on what I would say is their only two chances in the first half, other than the something after one minute.

With every set-piece we concede, I know we can do better. It was a good delivery but, as a principle, I’d like to avoid that if we want to do something special. Then a little bit on the second goal, I think we could have avoided that. But it was a brilliant ball from [Granit] Xhaka. But we stayed in the game, coming out in the second half, one goal could change the momentum, and then Arsenal showed why they are a big club.” – Thomas Frank

The ex-Brighton and Hove Albion forward has started well at his new club. In fact, no player has registered more shots in the box (six) from Gameweek 6 onwards.

“We brought him in for that reason. He’s a proven Premier League scorer. We played some games early season with false nines, trying to find solutions. There were times in games with that bit of clinical finishing, we would have got more points. How close he kept that first touch and how quickly he shot is why he scored.” – Frank Lampard on Neal Maupay

“Always the first touch is the key [for his goal]. We’ve got very good players in midfield and the wings. They make the difference. I have to be there to finish. I’m just happy for the team. It’s been coming. We had a very good week of training and we deserved it. I wouldn’t say I feel under pressure [to score]. I know my job I have to score. That’s why they brought me in. I needed that goal as I haven’t played much last month. I wasn’t playing for Brighton towards the end. It was only my second game of the season. I needed this goal. I’m here to help. I trust my team-mates to put me in the right position to score.” – Neal Maupay

Demarai Gray (£5.5m), meanwhile, was one of the game’s best attackers, but it is Everton’s defence that is impressing most.

Budget defender Nathan Patterson (£4.1m) has started all of those fixtures and offers value, while no defender can beat James Tarkowski (£4.4m) for Baseline BPS.

“It’s a win that has been a little while coming. We probably have deserved it somewhere this season already but it hadn’t come. We have been hard to beat recently but we haven’t had that clinical edge in front of goal but today we had that. It feels like a win that is deserved because it was coming. We are working for it and the lads are owning it. The new players are settling in well. We are playing a different shape to what we were and today we showed little bits and we will get better. The big thing is the three points to give confidence going into the international break. It was amazing to stay up like we did last year but we knew we needed to be more stable defensively in this league. The players that are coming in are doing well. We are far from the finished article but not conceding too many goals is something we should be proud of.” – Frank Lampard

As for West Ham, they once again failed to create much and their problems clearly lie in attack, having scored only three times in the league this season.

The underlying attacking numbers, meanwhile, highlight some of their issues:

As a result, Jarrod Bowen (£8.1m) has failed to score or provide an assist in any of his seven league appearances this season and has had only one shot on target from 15 attempts.

“We weren’t very good. We picked up a bit after they scored. I think the first half was a poor game all round really, the amount of times both teams turned the ball over. We had a game on Thursday night and you have to take that into consideration as well. We are also putting new players in and trying to find out more about them. Today we found out little bits, but it was mainly the players I know about – they are the ones who let me down with poor play overall. We couldn’t put three passes together, and when we got anything in the final third it was almost always the wrong decision. In the last 20 minutes we had some chances to at worst get an equaliser so if you really analyse the end of it we missed a few big chances.” – David Moyes

“I’d love to say no… We want Thursday, Sunday. I wish it was Wednesday, Saturday because we’d be in the Champions League. But if you look at results [of other teams in previous seasons] Thursday, Sunday results can be very difficult.” –  David Moyes on whether playing on Thursday’s has an impact