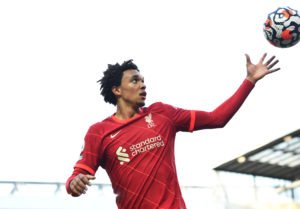 We’ve put together our Scout Picks ‘bus team’ ahead of Gameweek 9 of Fantasy Premier League (FPL).

In this early selection, we select a first draft of our regular picks before they are finalised and published much closer to the deadline.

The final Scout Picks cement our weekly selection but this ‘bus team’ article – a term coined by the Always Cheating chaps – will discuss the players who are likely to be in the running.

We start with Liverpool, who will have had a 17-day gap between fixtures by the time Brighton and Hove Albion visit Anfield in Gameweek 9.

The Seagulls, of course, will be led by new boss Roberto De Zerbi, which does make them a bit of an unknown.

However, with key members of the Reds’ squad returning to action – like Thiago (£5.2m) and Joel Matip (£5.9m) – they will fancy their chances, having beaten Ajax 2-1 in a much-improved display last time out.

Here, Trent Alexander-Arnold (£7.4m) and Mohamed Salah (£12.9m) are ‘the likely lads’, but international minutes could present us with other opportunities.

For example, Luis Diaz (£8.2m) is due to face Guatemala in New Jersey on Saturday and Mexico in California in the early hours of the morning on Tuesday, whereas Darwin Nunez (£8.9m) will be based in Europe for both of Uruguay’s fixtures.

In Chelsea’s first game under Graham Potter last week, Reece James (£6.0m) and Raheem Sterling (£10.0m) were deployed as wing-backs, although the latter was much more of a winger (the Leandro Trossard (£6.5m) role, if you will), with Marc Cucurella (£5.2m) providing support behind him.

“We wanted to get some dangerous width, and Reece [James] and Raheem [Sterling] were that. They were more full-backs in the lateral positions and then midfield players. I thought we got Raheem into some good situations and Reece as well down that side. Mason [Mount], too and we scored a good goal. [But] you don’t want Raheem really defending in his box too often, and I don’t think he did. I think Marc Cucurella managed the situation quite well. I can’t remember too many opportunities they had down that side. Raheem is really good at attacking a backline and scored a fantastic goal. I thought he was really good in the game. Reece balances it off a little bit, and we can still defend in a four if we need to, so that was the thinking.” – Graham Potter

From those wider positions, Sterling was able to net his fourth goal of the season, while James was almost relentless in his attacking forays, which suggests they can cause Crystal Palace plenty of problems in Gameweek 9. Indeed, the Eagles have conceded in each of their three home matches so far.

Leicester City are in a complete and utter mess right now, having lost six Premier League matches in a row, but they have still scored two goals in four of their seven fixtures this season. Now, they face an equally leaky Nottingham Forest side that rank bottom for expected goals conceded (xGC). James Maddison (£7.9m), meanwhile, produced seven shots and created four chances at Tottenham Hotspur on Saturday, whilst netting his third goal of the campaign.

Elsewhere, Erling Haaland (£12.0m) is up against a Manchester United side that have tightened up of late, allowing just two goals in their last four Premier League matches, but on current form, only injury will keep the Norwegian out of the Scout Picks.

As for Joao Cancelo (£7.2m), his price is the only real obstacle to him finding his way into our weekly selection, which has a budget of £83.0m.

With Arsenal and Tottenham Hotspur squaring off in the north London derby, we could potentially overlook both sides in favour of those with ‘easier’ fixtures, at least on paper.

For example, Brentford visit a Bournemouth side that are among the five worst teams for both minutes per expected goals (xG) and xGC in their last three matches, despite going unbeaten during that time.

Attacking and defensive representation from Thomas Frank’s side is appealing, then, with Ivan Toney (£7.2m) a key target up front. At the back, Aaron Hickey (£5.0m) could profit from the Cherries’ weaker left-flank, while David Raya (£4.5m) and Ben Mee (£4.5m) are also in the running.

Perhaps the likeliest source of defensive returns, however, will come at the London Stadium, where West Ham United entertain Wolverhampton Wanderers, given that they have netted just six goals between them all season. Lukasz Fabianski (£5.0m), Kurt Zouma (£4.5m) and Jose Sa (£5.0m) could all be decent picks, then.

Further forward, Jarrod Bowen (£8.1m) could pick up some support from the Scout Squad panel, but it’s a lot of money to invest, given that lack of attacking threat we touched on above.

We could see another low-scoring affair at Southampton, which is why James Tarkowski (£4.4m) has found his way into the initial picks. The defender ranks among the top five in his position for aerial duels won (20), clearances (42) and blocks (15) this season, and looks at ease in Frank Lampard’s new 4-3-3 formation.

Nathan Patterson (£4.1m) is cheaper still if savings are needed, while Gavin Bazunu (£4.5m), Kyle Walker-Peters (£4.5m) and Armel Bella-Kotchap (£4.5m) are all options in the Saints camp.

Given Leicester’s ongoing defensive problems, which has seen them concede a whopping 22 goals in their opening seven matches, a Nottingham Forest attacker will surely end up in the mix.

Morgan Gibbs-White (£5.5m), who has taken on a share of corner and free-kick duties following his arrival from Wolves, could profit from the Foxes’ issues defending set-pieces.

Aleksandar Mitrovic (£6.9m) and Alexander Isak (£7.0m), meanwhile, ought to be in the conversation for a forward spot if we opt for a three-man frontline.

There probably won’t be too many takers for Wilfried Zaha (£7.2m) in Gameweek 9, given that he faces Chelsea, but he has registered four goals and 15 shots in his five matches this season.

With Potter’s wing-backs positioned high up the pitch, could there potentially be space in behind for Zaha to exploit?

It’ll be a tough ask for any of Leeds United or Aston Villa’s options to force their way past others, but there is potential for Nick Pope (£5.2m) or Kieran Trippier (£5.2m) to sneak in, although at this stage it does feel unlikely, given that opponents Fulham are one of the top-scoring sides in the division.